I spent this weekend in Seattle doing a book making class at PCNW with Dan Milnor and Michelle Marsh, and a widely varied group of students.

While I would have a hard time pointing at as single specific thing I learned here, it was a good time, and it is always valuable to have material you kinda-sorta have seen before presented to you again (and again, and again, until you start teaching it yourself and then maybe -- maybe -- you'll truly start to understand it in a profound way). I've been kicking these damned photographs of my alley around for half a year now, at least, and have put them out there in some ways (I've also written a thing for Luminous Landscape along the same lines, and if Kevin runs a high enough fever he might run it. ETA: He did.).

The class was mostly an opportunity to look at other books and at other people's work, other people's process, and to simply sit and think and mess around with the photos. I developed a completely new approach to the meterial, with some help from out Noble Instructors, who cruised by with interesting, brief, suggestions on a couple of occasions. That, and thinking about Sally Mann's embrace of sentimentality, and a certain amount of skull sweat, and now I have an idea. I need to shoot a bunch more pictures.

Here are the noble instructors. 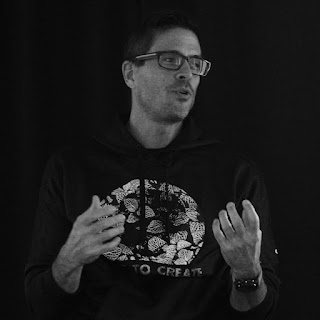 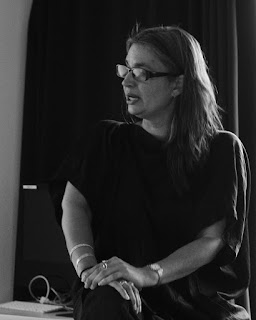 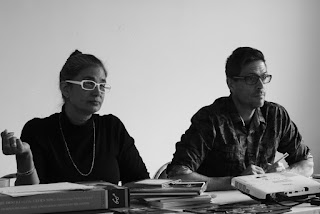 They look more appalled than they were. I think
they're just listening intently.


I have never before glued up a physical dummy book, and found the experience more useful than I thought it would be. It was not the great epiphany-producing world-altering experience that it's sold as by people who want to teach you how to make photobooks, but it is not without merit either. Here are some students at work: 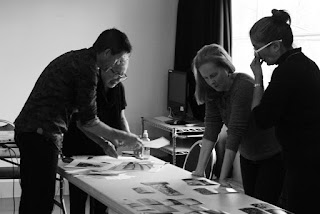 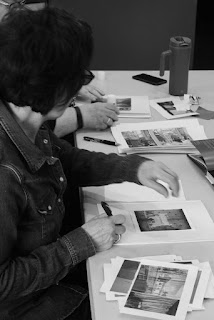 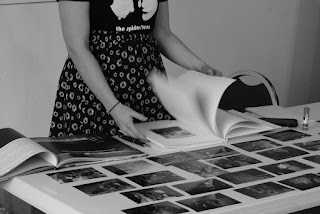 Not everyone's work floated my boat, particularly. Most of it is material I would never have shot. However, the palpable engagement everyone had with their own work makes up for much. Some of these folks have devoted years to their body of work, and it was fun to see the process of them making sense of their work, even as I found a new approach to making sense of mine.

I can't even bear to press the shutter button without having some preconceived notion of how the picture will make sense in some larger context. This is not to suggest that the final form (if any) will resemble that context, but I can't shoot without a destination in mind. So, my process was to find a new, better, destination. Most of the students were, to my eye, trying to find their first endpoint for a body of work, and that's kind of exciting. And, somewhat to my surprise, they seem to have consistently discovered somewhere to go. 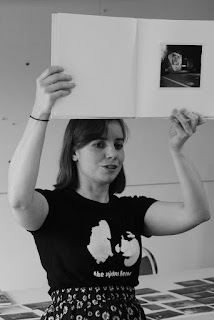 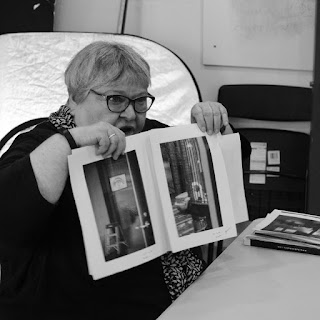 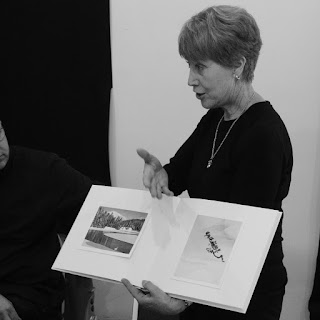 Dan and I were the only people to use a camera in the entire class. Michelle took some photos with her phone, but I think that was literally it. I was surprised by how little photography actually went on in a photography class in a photography school. But there you have it! 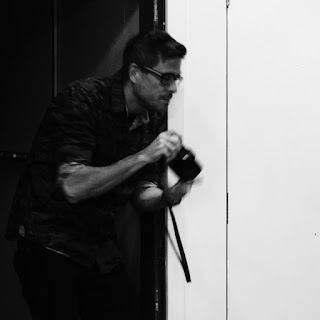 
And lastly, I got a Hot Tip to the greatest blurb book ever. A paean to bravery, stupidity, and I cannot help thinking, alcohol: Grandpa's Cougar.

... the lion swiped at my gun and hit the end of the barrel with his paw ... caused the rifle to discharge ... the lion became very active and agitated ...