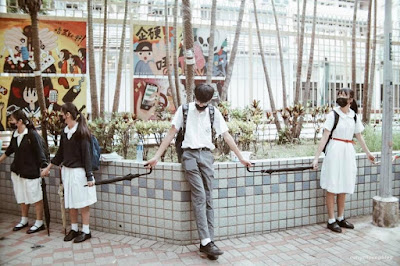 As always, take your time.

There is a cheap, half-funny, read. Don't fall for it. Take a moment. Do you find it in any way oddly compelling?

Ok, so there it is. I have been unable to run down a source for this, and I suspect that it's a frame grab from a video (albeit a pretty decent one).

All appearances suggest that it is a Hong Kong student protest. These echo the larger street protests that have been taking place in Hong Kong for some weeks, where they have made some political gains, have deployed some interesting tactics, and most importantly here, developed a unique iconography of tools and tropes. There are helmets, hand signals, laser pointers, and so on. Much misinformation has been published about all of these things, so don't trust anything you read (notably, laser pointers don't seem to disrupt facial recognition systems, that's what the masks are for.)

What matters here are that masks, umbrellas, and human chains are tools and tactics used in Hong Kong's recent protests. The student protests have been deploying this iconography to make crystal clear the connection of their actions with the larger ones. I believe that the student actions are largely symbolic and fairly short-lived.

Here we have a chain of what appear to be students, probably surrounding some building, possibly their own school. They appear to be using umbrellas to lengthen their chain, which is interesting. The point of the human chain is to illustrate numbers. If it begins in Battery Park at the very end of Manhattan, ends at the Apollo Theater in Harlem some 8 or 9 miles away, and is not observed to have any breaks, well, that's a lot of people isn't it? Maybe 10,000 or so. If you're extending it with umbrellas, the count shrinks and the effectiveness drops. Anti-protest propaganda can jump in and claim the numbers were tiny, that it was all umbrellas.

Anyways, perhaps they needed a certain minimum length to close some loop, and they did what needed to be done.

The umbrellas, while weakening the actual point of the protest tactic, strengthens the symbolic character of this picture immensely. The umbrellas are emphasized here.

The cheap reading here is that nobody wants to hold hands with the boy, but please note that the girl frame-right is also holding two umbrellas, so this read is wrong, uncharitable, and a distraction.

So, we have a strong set of symbols in play here. Behind the kids there is some sort of graphic on the walls which, to my eye, rather echos the kids in some ways. I am charmed by it, although I have no idea what it means. Possibly, in-context, these graphics clash horribly? To my eye, they support the scene, rather like the well-known poster which appears by the merest accident in the background of HCB's photo of the jumper. 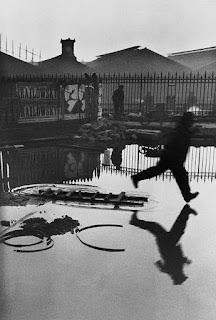 Look at the boys head and feet. I don't pretend to know how he feels, but I do know instantly that feel he does. Now look at the girl frame-right. She looks at the oblivious boy, neutrally maybe. Her mask obscures her features, her posture is simple, upright. This could be a nothing moment. We could read it as an adoring glance from a girl, at a sheepish boy too shy to meet her eyes. Or, she could be simply checking human chain with a glance as the boy mourns a dead fish. Anything is possible, but there is depth of possibility here.

There are deeply personal things, intimate things which we could guess at, speculate about, but never really know.

Finally, this damned thing looks like a painting. I just figured out what the boy's posture reminds me of. It looks like a crucifixion. You can read the three visible girls as, I dunno one of the Mary's and a couple soldiers? The tree sticking up behind, and the umbrellas, echo the cross. Even his feet overlap in the approved position.

The resemblance is incredible, once you start noting details. Yes, I am a 99% sure that this is a complete accident. 1% is that it's staged to look like a crucifixion.

So there you have it.

Street photography at its ambiguous best, while simultaneously combining the iconography of Christianity with the 2019 Hong Kong protests.

No wonder this caught my eye.