Those of you elsewhere in the world may not be aware of the noose story.

The team of the sole black driver on the NASCAR auto racing circuit was assigned to a garage at the Talladega racetrack, and a hangman's noose was found in the garage tied in the end of some sort of pull-rope for the door to the garage. This was investigated by the FBI to determine if some sort of racist/hate crime had occurred, and they determined that since the noose had been tied some time before October of 2019, it could not have been targeted at the driver, Bubba Wallace.

Here is a photograph of the noose. 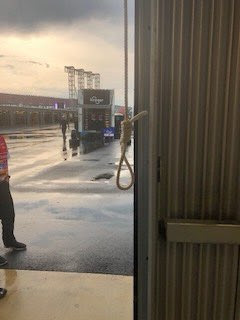 There's a lot of ideas running around. Maybe the FBI is lying! Maybe the hate crime is actually in assigning Bubba Wallace to that specific garage! I don't pretend to know, but what I am pretty confident in is this: nobody else knows either.

There is no denying that the hangman's noose is closely associated with racial lynchings in this country. It is not the only association, but it is a tight one, and the dominant one. How the thing takes someone in, say, the UK I do not know. At least it has a kind of macabre to it, surely?

What interests me is the commentary I have seen. There are people who say, perfectly seriously, that the rope is new and the knot recently tied. This is something that you absolutely cannot see in the picture. There are people who remark that it's a slipknot, which renders it useless as a door pull: the first part is true, the second is not, as anyone who's actually tied one of these things knows.

Another little fact that someone who's tied one of these things knows is that the knot uses an astonishing amount of rope.

Anyways, much of the discussion around the picture boils down to asserting as facts things that the speaker cannot possibly know, in support of a theory of motivation.

In reality, we have no way of knowing why someone tied the knot. No amount of chemical analysis of the strands or poring over surveillance footage will reveal the motivation. It could have been a sort of blockheadedly whimsical way to use up excess rope. It could have been tied specifically to threaten some other black person in NASCAR (Bubba Wallace is the only driver, but I bet there's plenty of black mechanics.) It could have been tied, and then used, to hang a cat, or a Halloween decoration. To be fair, if some prick hung a cat with it it's possible surveillance footage would reveal motivation.

What we are observing here is that people have formulated a theory, invariably along strict dualistic lines: a) it was a deliberate racist act specifically against Bubba Wallace or b) it was a completely innocent act, intending only to create a useful handle by which to close the garage door. The selected theory then informs what they see in the picture. This is a near perfect case study in how people strive to discern motivation to a photograph, when there is none to be discerned.

There simply isn't much to be seen in the picture.

The motivation of the man who tied the knot is certainly not present, and no amount of wishing will make it appear.