Crit: When we lie down, grasses grow from us

I pointed this book out a while ago, when the author was doing a fundraiser on indiegogo to pay the baksheeh to her publisher. I was dubious about the project for a number of reasons, but elected to back it anyway, for other reasons. When the funding goal failed, I assumed that the author was simply going to end up spending the money on rent, and to honest, I was OK with that. I am not an idiot, I know how these things go.

The author, Karolina Gembara, did not spend the funding she raised on rent. She went back to the publisher with the money she did raise, printed a smaller run of books, and delivered them. Holy cow, that was a nice surprise!

You can now buy the book and I can recommend it, if you like this sort of thing. Read on to see if it's the kind of thing you like.

The book comprises about 45 photographs, of which several are near-repeats. There is a running theme made up of 4 photographs that serves as a kind of anchor, and there are two photos that are again similar that serve as bookends, just inside the endpapers.

My first impression was simply that it was surprisingly beautiful. None of the photos are hero shots, none of them were hard to take. Many contain no people and are simply arrangements of furniture and objects, and the people pictures appear to be posed but not "lit" in the strobist sense. They're just people sitting or lying down someplace. The austerity of some of the frames might have been a bit of effort, clearing clutter from the frame can be surprisingly difficult.

The photos are not heavily "designed," they feel loose but deliberate throughout. This isn't from-the-hip street shooting, nor is it formal still-life, but somewhere in between, with a very notable attention to color about which more in a moment.

Note that the GOST web site does a terrible job of hinting at how beautiful the book is.

It is a little book, unassuming. There is no great ambition here to tell a sprawling tale, or even a universal tale. It feel simple and personal. The simplicity of the pictures speaks, here, but is not the only thing that suggests this.

This might be the most color-sensitive book I have ever seen. The palette is mostly delicate pastels, pinks and taupes, and blues. I can imagine that printing it may have been a nightmare, because color, and the delicacy of these colors, is so important to that sense of beauty that I encountered on opening it. The general feeling is sort of Mediterranean, perhaps in winter, or on a lightly overcast day. The light is bright, but not crushing, the colors are light, not brilliant.

It happens that these pictures were taken in India, and this is an entire palette of expression I have never encountered in photographs from India, which is usually given to us as brash, bright, noisy, crowded.

Flipping through it, my impression was of Evans-style sequencing, with each picture having some geometrical connection to the next, but after a little while I realized that the whole book is in fact a dense mesh of interconnection. Textures, colors, shapes, postures are repeated and repeated, it's very well made in that sense. Wildly disparate elements are made to feel related by one or more visual touches.

The important gestures: beds and bedding, always austere and appearing unlived-in, temporary or abandoned; the turned-away or hidden face; something or someone leaning on a wall.

One need not be a rocket scientist to read a sense of alienation, of social isolation, together with exhaustion, and a feeling of itinerancy. The flavor here is very much of someone where they do not feel they belong, a place where the social details of living are a constant struggle.

And yet there is no particular sense of negativity. The colors are warm, beautiful. The people with their faces turned are not violent, they do not reject, they do not despise, they simply don't notice. They are simply somewhere else, apart.

As an occasional photographer myself, I read into the turned faces an unwillingness on the part of the photographer to engage, that kind of shyness that afflicts most of us, here fully realized. It makes me imagine the artist as introverted, withdrawn. Her emotional distance from the place she finds herself in is, I imagine, rooted largely in her own unwillingness or inability to open up, to engage, to be social, to make for herself a place.

I don't see this as a weakness, necessarily, though it may seem so. It is simply that her character is such that she cannot make herself at home here.

Now, to be fair, this stuff is exactly what it says in the blurbs about the book, so it's possible that I am projected what I read onto it, but I don't think so. I think the book delivers exactly what it says on the tin, and does so with great skill and beauty. I would not call it a tour de force because it's such a little book. It's so personal and limited in what it wants to say that I cannot comfortably use any grand descriptors.

The ambitions are very small here, but they are fully met, with real grace.

This is a book that would do just as well as a bunch of pictures hung on a wall, but it is by no means just a mausoleum containing some gallery show. The mesh of interconnection and theme is too dense. Rather than the book being a show bound into book form, a show would be a book cut up and hung on the wall — but it would work, and work quite well.


There are maybe three pictures I personally would have cut. The opening and closing photos are handled in a weird way, printed across the gutter on to a trimmed-down page. This design note does not strike me as having much point, and I think the pictures themselves could usefully have been cut anyways: 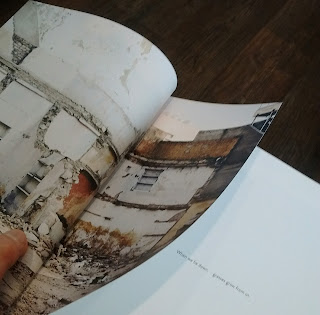 (Nothing else is printed across the gutter.)

The poem the book's title comes from, which appears at the end of the book, suits the material very nicely, I find the pairing to be quite successful.