Let us begin with what we can determine of the facts.

In the summer of 1968 (probably) Gian Butturini, an Italian graphic designer went to London on business, and took a lot pf pictures of London with some small camera. His pictures were, where we can identify or guess locations, all taken very close together. Regent's Park, Hyde Park, Carnaby, Earl's Court, Portobello Road, Piccadilly Circus. All these locations are located within a circle not more than 2-3 miles across. I don't know if this counts as "London" or not.

The London Street Commune as a historical event was happening then. Butturini has a photo of the sign for Pronto Cafe, the epicenter of the thing, according to some accounts. It seems likely that the Street Commune was a source of much of his material. If not actual members of the Commune (insofar as that even means anything) then the events in which the Commune was admixed.

Accordingly, the breadth of humanity we see portrayed is, well, substantial. There are a lot of black people, white people, poor people, less poor people, hippies, squares, young people fashionable and not in a variety of ways,and a couple of guys who look like Jesus (European standard version.) We see a surprising number of indications of theater in the backgrounds, but I think this largely occurred in a theater district? The book is very much of a specific place, which may or may not arguably be "London" and an even more specific time.

The photographs are uniformly blurry and what purists would consider to be remarkably badly printed. There's a ton of grain, and everything looks push processed to hell and back. Contrast varies from "very high" to "off the charts", figures are often rendered as silhouettes (sometimes, apparently, with a certain amount of post-processing effort). The whole thing has a very graphical feel, it all looks like poor newspaper prints which feels very weird given the nearly sumptuous physical production of the book.

Interleaved with his often nearly two-tone prints, Butturini stuffs in graphical bits and pieces. Pure black and white design notes, no greys. Some of the prints are intended to look "torn" although you can tell the "ripped edge" is simply drawn in. Other figures are cut out and dropped onto a plain white background. A few of the prints might even be collage, or possibly just a strangely busy background with, maybe, a poster behind the subject. The flavor is very low-fi, very zine-like, very collage-like. I think this works rather well with the overall beat sensibility of the thing, but the total effect is not something a purist will like one bit.

There is text, rendered very stylized, in that zone between text and design: an excerpt from a poem, and the Italian text of Luke 3:23-35 rendered in a pseudo-calligraphic font on a "torn" page opposite a photograph of a guy who looks like Jesus descending a staircase.

Butturini is fond of the jarring juxtaposition. You may, or may not, recall the two page spread which has caused Martin Parr a little trouble: a black woman in a booth, a ticket inspector for the Underground, appears opposite a photograph of the Regent's Park gorilla in his cage. This caused a extraordinarily small amount of extraordinarily loud of outrage. The photograph of the gap-toothed old man with the Israeli flag (a Jew?) pinned to his front, opposite a graphic of barbed wire, and one page prior to the young boy with the Nazi pin (eagle and swastika) doesn't seem to have raised any eyebrows.

The photograph of two young women waiting for a train, the black one reading a book and the white one smoking a cigarette and holding her purse protectively, caused no fuss. Even the fashionable young man on the opposite page, "looking" bemusedly at the women was unable to arouse any outrage here in the year of plague, 2020.

Butturini places a photo of a young man with a needle, opposite a pure black page with a single "rip" of white down the center like a bolt of lightning.

Butturini refers in his opening essay to a few controversial pairings, the occasional ironic emphasis, a touch of pity, an almost restrained smile. He declines to tell us what it means, and insists that it's up to us.

Butturini is not an idiot, he knows what he is about. You can see the fingerprints of his design credentials throughout, nothing is accidental. This is, to my eye, an excellent example of what sequencing can bring to the table. He has, ultimately, a bunch of really crappy photos, printed very poorly, and he makes this thing out of them.

Mixed in there, we see some harbingers of "street" tropes we are now very tired of. Juxtapositions of the poor and the advertising. The homeless man sleeping on a sidewalk. An old and very ragged man stands on the curb; in front of him painted on the street, the word LOOK. How very clever.

There is one photograph which reveals something of what Butturini was aiming for. 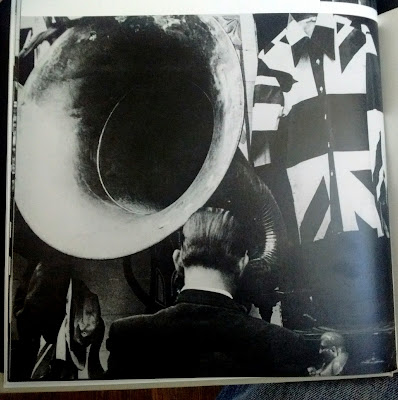 If that's not a direct quote of Robert Frank's photo: 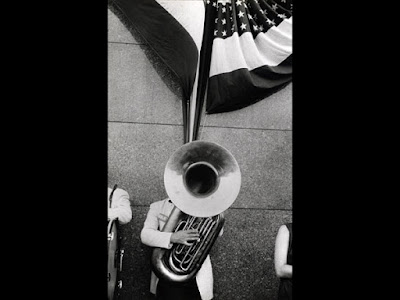 ... then I don't know my business. Butturini clearly knows The Americans and had ambitions in the same direction.

Is it good? Fuck if I know. It's very idiocyncratic, and it's very... rich? Yes, let's go with rich. There's a lot of material in it that seems to mean something, but what, who knows. The Jew is placed next to barbed wire. I get the reference, but what are you trying to say? The Jew is placed one page before the Nazi, and again, I get the reference, but what does it mean? The black ticket collector in a box is placed next to the gorilla in a box, and it seems impossible that this isn't on purpose, but again, what does it mean?

There are plenty of people out there who are certain it means to assert "black people are apes" but those people are blockheads. It doesn't mean that any more than Butturini means to assert "Jews belong behind barbed wire" or "Nazis are soft-faced little boys." Butturini is being deliberately obscure, and it seems unlikely in any case that he thought any of these things were true. Indeed, in his own opening essay he writes:

At Speaker's Corner, however, I was able to photograph them. On Sundays, they crowd around a box to listen to one of them give them a sweet fairy tale about freedom of equality of racial integration.

Make of that what you will. Butturini seems very black-positive, but not optimistic, and he says "Them" rather a lot. It's certainly not a clear statement of anything, but I have a hard time reconciling it with "black people are apes."

The book is highly political, there's a lot of political content and to my eye the left/protest/hippy/poor position is given a sympathetic eye. This is consistent with the essay from Butturini himself, however obscure it is, with his selection of an excerpt from Ginsburg's "Europe! Europe!" near the beginning as a textual element, and with the essay by Luciano Mondini, a friend, introducing the photographer.

We may take it as given, I think, that Butturini was, like the text you are reading, left aligned. In the 1960s what would this have meant? Likely it means, and again we see this in his own words, he would have seen black people, as well as Jews, the poor, and so on, as a distinct Them, to be respected, loved, supported, lifted up, but nevertheless definitely Not Us. In modern terms we identify this attitude as racist, sexist, classist, and anti-Semitic. These are the attitudes that lead us out of the frying pan of personal isms to the fire of systemic isms. In 1968-69 it was, however, pretty much the standard radical-left position.

Here I enter the land of speculation. Butturini was a leftist, distinctly so, as anti-racist, as feminist, as anti-classist as any leftist weirdo who happened to be white and affluent could be in 1968. He wasn't really optimistic, he didn't see the world becoming a fair and beautiful place by 1970. But then, nobody who wasn't incredibly high was particularly optimistic.

1968 was the summer of love, but also of darkness and fear. Harold Wilson (Labour), so famed that his wikipedia entry has 90 words 18 of which are his name, styles, and dates, was the Prime Minister of the UK. Labour was about to lose Parliament, Margaret Thatcher was about to begin her campaign of terrible ideas from a seat in Cabinet. Lyndon Johnson was merrily pursuing the shit out of the Vietnam War, and Nixon was about to replace him. Nuclear Armageddon seemed around the corner.

Note: the very short wikipedia article I report for Harold Wilson seems to have been an error, whether on the part of wikipedia or me I cannot say. You may make your own judgments, of course. Wilson's article is appropriately lengthy now.

Butturini, to my eye, reflects this precise gestalt of idea and attitude. I recognize him as, more or less, my parents. Good, earnest lefties who didn't actually know many black people and who were honestly a little bit uncomfortable with anyone who wasn't white. This particular leftist made a book aiming at a Robert Frank meets a graphical underground-newspaper sensibility, together with a healthy dose of leftism mixed with hardheaded realism. He hit it, I think, and we can see his bootprints on it clearly. What is unclear is whether it was a good idea or not.

I do not think it has worn particularly well: it's dated in its attitude, its styling, its politics in ways that Robert Frank's book isn't.

By way of a sort of coda, I think it is notable that the voices shouting at Martin Parr to apologize for his role in republishing this "extremely racist book" seem to have never mentioned the opening essay by Butturini. This essay explicitly references the photos in the spread they find problematic, the ticket collector and the gorilla:


I did photograph a black woman, locked in a transparent cage; she was selling tickets for the Underground; just a listless prisoner, in immobile island outside time in the midst of waves of humanity flowing by and mixing and then splitting aside around her prison of ice and solitude.

I did photograph the Regent's Park gorilla, which with imperial dignity receives the witticisms and peel thrown at it by its nephews in ties.


These are the only two photographs specifically mentioned in the essay (there is a remark which may or may not specifically call out the young man with the needle.) That Paul Halliday and Ben Chesterton, both of whom have the book, neglected to mention these remarks is interesting. This also casts Parr's insinuation that he didn't notice the spread in a dubious light. What is perhaps most clear is that Parr, Chesterton, and Halliday, are all disingenuous pricks.

By all means, cancel Parr. But why not cancel the lot of them?