I am continuing to bash stupidly away on how people make meaning when they see a photo. It was brought forcibly to my attention that the formal qualities of the photograph do matter, in several ways. Including that they speak to artist intention, but also, of course, in other ways.

Especially with a print, we do look at the damned thing. We feel it, it flexes, it has mass, we can't see the photo because of glare, and so on. On a screen perhaps, we look less at the properties of the object itself, perhaps because the screen is more ambiguous. Sometimes the screen literally is a window to elsewhere (a video conference, a webcam) and sometimes it's only metaphorically so — but the clues as to which we're looking at Now are a bit thin.

Still, we look at the picture and its formal qualities. What's in the center of the frame, what's in focus. Is it bright, or dark. Is it large or small.

I have formulated one of them quadrant things: 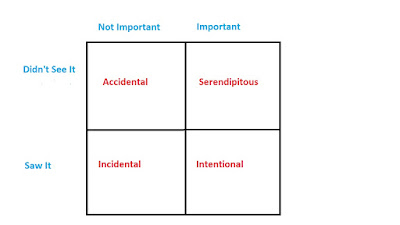 to describe how we might categorize the formal properties of the picture. The left side "Saw it", "Didn't See It" refers to our theory of the photographer's actions. Do we think the photographer noticed/meant whatever it is we notice, or not? ("Meant It" versus "Didn't Mean It" might be better terminology here, but I am damned if I am going to redraw the stupid thing.) The "Important" versus "Not Important" refers again to our theory of whether whatever formal property we're seeing matters.

This taxonomy is going to be a bit personal, a bit fuzzy. For any given photograph, and any given viewer of it, it's likely to be a bit specific. But likely also there will be a lot of commonality if I show the same picture to 10 people.

If the picture appears to be a poorly made snapshot, we're going to evaluate it one way: a lot of stuff is going to be lumped in to Accidental or Serendipitous because we judge the photographer to be not very observant or deliberate. The only thing the photographer meant was to stick grandma in the middle of the frame, everything else is just stuff.

If, on the other hand, the picture appears to be well-made, we're likely to guess that the photographer "Saw It" a lot more. The botched focus might not be Accidental at all, it might be Intentional.

Whatever we judge to be Important is, of course, the stuff we're going to put weight on. That it, we include Intentional and Serendipitous.

I guess this is a fancy way of saying "we theorize that the photographer meant to do some of the important stuff, and didn't mean to do some of it" which isn't really a remarkable statement, but at least we have names for it now?

So in any case, the Important stuff is by definition the stuff we're likely to try to make meaning from. The Intentional stuff is likely to inform our Theory of Authorship (again, pretty much by definition) and the Serendipitous is stuff that we suspect that the photographer didn't mean but which we think changes the meaning of the thing. You might imagine a photograph of a crime scene, where the foreground material points to suspect A, and the photographer's intent is to implicate suspect A. The bushes and shit in the background don't matter, but the foreground evidence does.

At the same time, there a Clue in the background which, to our eye, absolutely convicts suspect B rather than A.

The photographer's intent was (we theorize) to implicate subject A, but the meaning we make from the picture is rather that B is the guilty party.

And so we bring this baggage with us, as it were, into the mirror world of the frame. We enter the picture in the role of the detective. The photographer excitedly shows us the evidence against suspect A, and we nod. But, because we are clever and observant, we notice the Clue and arrest suspect B. The world we build around the picture, around "ourself" as we inhabit the picture, may waffle between suspects for a while, but the presence of the Clue resolves the shape of the notional world the picture was taken from, and provides us with the meaning of the picture.