I'm on holiday for a little bit and my well has temporarily (I assume) run a bit dry. I'll at least take a close look at a recent photo by Mark Peterson (he of the Triumph of the Will/NYPD at Rockefeller Plaza a few months ago) which should be fun. When I stop holidaying.

I also have had an idea for a new set of photos, with which I will be torturing you shortly, I think. Be well, try not to die.

Ooops, I forgot a diagram earlier. The remarks on house layout below should make more sense now.

I am, for reasons, re-reading James Curtis' book Mind's Eye, Mind's Truth in which Curtis says a remarkable amount of unsupported stuff about Walker Evans, and ran across this gem regarding a photo which appears in Let Us Now Praise Famous Men of an interior shot of the Gudger (Burroughs) house:

He [Evans] began by taking some 35mm. shots from the from the kitchen doorway, looking into the room, but soon discovered that from this point of view he would have a difficult time controlling the light with his view camera. He solved the problem by using the special technical features of his equipment. He set up his tripod in the doorway directly opposite the kitchen door. From that vantage point, he could record the washstand on the outside kitchen wall, and the interior of the kitchen itself. By sliding the front of his camera sideways, he could look directly into the kitchen without having the kitchen window in his picture. In short, he moved the entire scene off center to avoid inclusion of an unwanted light source in his photograph.

At this point we're a little bit "huh?" so let's look at the picture now: 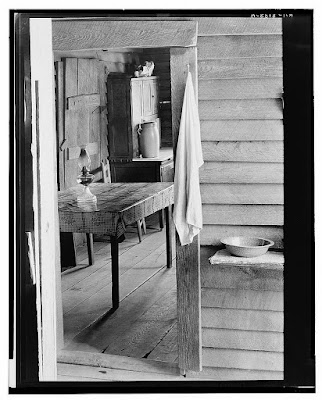 I have to admit I am not seeing any obvious front-standard movements here, it's just a camera placed in a doorway (you can see the doorframe of the near doorway as a white vertical plank on the left edge) looking across a hall through another doorway. You can see that there is a window in the other room, probably about on the right edge of the frame, concealed behind a clapboard wall.

A front-standard slide could have provided this view with the clapboard and so on all squared up, by pointing the camera directly across the breezeway for squareness, and then sliding, but Evans has not done that here, none of the boards are square to the frame.

This is just a guy standing in the right spot with a camera.

Curtis goes on. At this point it should be noted that James Agee, who described this house, does in fact place the doorway Evans is standing in directly opposite the kitchen doorway.

... Evans's manipulations distort the architectural design of the Burroughs house. On several occasions, Agee commented on the placement of doorways, noting that those opening onto the breezeway were located opposite one another.

But Curtis is just wrong here, and Agee is too. A view camera movement cannot make two doorways directly aligned appear misaligned in this way, it's simply not a thing. The doorways are not aligned.

A closer reading of the text Agee wrote would have in fact thrown this claim of alignment into question anyways, Agee's description of the layout of the house is inconsistent, and if you're attentive to his placement of the doors as he describes each room you see quickly that they cannot in fact be opposite one another. Each is more or less centered in its wall, but one wall is 12 feet or so long and the other more like 7 feet.

The actual layout of the house is something like this, with two 12x12 foot bedrooms on the left side of the hallway/breezeway (it is open to the world at both ends), a 12x12 storeroom on the right with a 12x7 (or thereabouts, Agee says it's "about half the size") attached behind the storeroom. Evans is standing more or less at the red dot, and he had his camera pointed this. The offending window is at the blue dot. 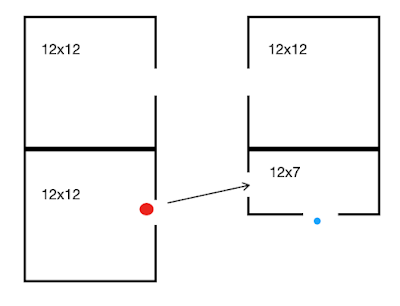 This layout and the misalignment of the doors is confirmed by various other photos which I think Curtis had access to. He refers often to a catalog that allegedly contains all the FSA photos by Evans. The modern online catalog might, however, be more complete, I have not examined the book Curtis cites. See this rear view of the house, though: 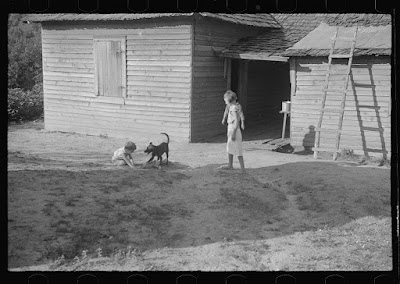 In any case, the idea that somehow Evans distorted the house layout with camera movements is simply bonkers.

(I think? I mean, can you think of some way the two doorways actually could be squarely facing one another, and yet that picture be produced with creative camera movement?)

Curtis seems to me, for this and other reasons, to have been thoroughly unqualified to perform the kinds of detailed analysis his book is based on. Which is kind of sad.