They put togther a little ad campaign, which includes these photos. Crappy screenshots are all that there is, because they pulled the little campaign immediately. 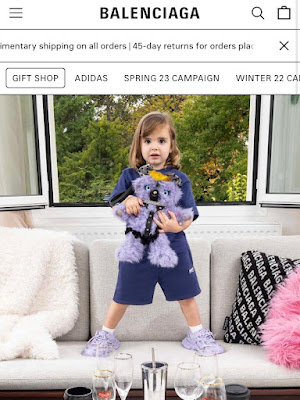 At first glance, there's not a lot going on here. At second glance, maybe you notice that the teddy bears the kids are holding are actually handbags, and that they (the bears, not the kids) seem to be wearing bondage gear.

Nobody knows what the rest of the paperwork says, because that's not the bait. The bait is in the bit at the bottom of the frame.

Anyways, sure, there's probably some "in-joke" cosplay embedded in here about whether or not they're engaged in banned speech, which they pretty obviously are not.

This has, of course, generated millions of dollars in free marketing for Balenciaga because internet scolds have very little else to do with their time. According to the now-standard script Balenciaga has pulled the ads, issued an apology, and blamed a nameless third party.

Here is the full text of the smoking gun, which is the right-hand edge of a partial sheet of paper:

…estion that it is occurring.
…use is not sexual inter-
… but rather sexual inter-
… ed, even though (through
… ay not actually have oc-
… a reasonable viewer to
…aged in that conduct on
… e Speech Coalition,
… visual depiction of
… although the sexual
…t must involve actual
… This change eliminates any
…ld pornography or sex
…ors might be covered by the term
…rse."

…statute, as we have con-
…l amount of protected

It occurs to me, a little later, that the papers in the background might be from the same case, and that the actual smoking gun is back there. The idiot influencer they slipped the story to may have picked up some random stick instead of the actual smoking gun, but it doesn't matter because once the connection is made the actual court decision can be found easily and the connection can be confirmed and nobody is going to notice that the shill picked up the wrong thing and blew their cover.

Naturally, the scolds are doing their best to generate value for Balenciaga by projecting a "pro-" stance onto the photos, and dramatically freaking out and offering up long twitter threads of art history explaining how this has been a problem forever.

Meanwhile, Balenciaga's customers, who are mostly in China, and who almost uniformly do not give a single shit what the scolds think, are getting fed a steady diet of "Balenciaga is an edgy luxury brand, you should consider buying shoes from them."

Further information suggests that the legal documents appear in a completely different section of the web site in a completely separate ad campaign, and were never remotely adjacent to the pictures with the kids. No idea what to make of this, if true. It is possible that we're seeing a "story" about a free speech lawyer who wears Balenciaga shoes and owns Balenciga bags, in one section of the web site, and a completely different story about kids on another, unrelated, section of the same web site, and that Professional Scolds are simply mashing them together.
Posted by amolitor at 10:43 AM 1 comment:

My piece on the not-so-planted alarm clock in the Walker Evans photo is up on AD Coleman's blog. Long-time readers will have seen one or more variations on this piece here, over the years, but I finally got around to writing it up with footnotes and no swearing, and AD generously published it for me.

Read it here: Photocritic: The Case of the Appropriate Alarm Clock

I hope this puts the issue to bed, at least for me.

I don't care if shadow selfies are portraits or not, because that only depends on what you mean when you say "portrait." No, what I am interested in at the moment is what they actually are.

The window metaphor recedes, and a sort of seeing-through-another's-eyes comes forward.

This was exploited to great effect in the book Predator by one Jean-Marie Donat, who made a whole book of found photos in which the shadowed figure is wearing a hat. The photos are frequently of children, or young women. But really anything works, after a while.

The book's title suggests a possible story for the photographer, a spooky one, and the effect is really quite something. I have not seen the book itself, but I've seen a smattering of photos and it's borderline electrifying. It requires only a single word, and a repeated simple motif to generate an entire creepy world out of what are in the end just a bunch of snapshots made by different people across 50+ years of time.

In general, I think this tends to support my general thesis about how we look at photos, and also has something to say specifically about the shadow-selfie.

There's a guy who shall remain nameless who is more or less notorious on a segment of social media for posting cute little "prompts for discussion" along with occasional photos from 20th century photographers, and relentless requests to sign up for whatever his latest stupid thing is where he will do the same thing.

It's the prompts that get me. Two recent ones are these:

Do we take a photograph or make it?
If a shadow selfie a portrait?

These are, I hope it is obvious, dumb questions. But why? Well, at least one of them is exhausted, but that's not it.

They are dumb because they are not questions about photography or photographs at all, but rather questions about words. Nobody who takes photographs is at all mystified by the process they use to take pictures. They know how their photographs come to be, in some detail. The question of make vs. take is what word you use to summarize the well understood process, not a question about the nature of the process.

You could argue, perhaps, that by asking about the word we are asking about how we think about these photographs and photographic processes, how do we make sense of these objects for ourselves?

Well, ok, maybe, but then why not ask that instead? Asking it in the form of a glib prompt yields a whole spectrum of answers, ranging from "yes" to "no," and that's about it.

My point here is that I suspect a lot of what we think of as "philosophical questions about photography" is in fact just glib blathering about words. The underlying acts and objects are, in context, well understood so perhaps it appears that all that's left to discuss if what language we use to describe it (see also the ongoing "shoot" discourse.)

I claim that there are actually things we don't understand about the underlying objects and processes and that we might could talk about those. People are, as a rule, not fans. Some take the position that these things are not well suited to word-based analysis, but mostly people are just shy of tackling these things.

I'm a guy who arguably uses more words than practically anybody, and arguably way too many, to talk about photography and photographs. I like to think that I'm actually talking and thinking about the underlying nature of the objects and processes, though, and not just stupid language chopping.

It's depressingly common for artists to do a bunch of shit, and then someone rolls up and says "oh yeah, some guy name Julio in Buenos Aires did that in 1997" and then the artist has to find something new to do. At least, this is the default.

You can wrestle around with your conscience and wonder if you're doing a new variation on Julio's thing, or whatever, but the basic understanding is that It Has Been Done and you'll go down as a mere copycat. There is an underlying assumption here, which is false: that assumption is that everything is done, essentially, on a global stage. Everything must be measured against the global stage.

The fact is that the people who live on my block have never heard of Julio or his work. It may even be that very few people have heard of Julio or his work, but in the Grand Tradition of Art none of this matters. It's been done. You will be revealed at a mere copier of Julio, and that's that. The people on my block will never get to see work of this kind, if we follow this to its logical conclusion. They'll never see Julio's work, because maybe Julio is in the end a pretty minor artist. They'll never see anyone else's either, because nobody wants to copy Julio.

This is deeply stupid.

The very idea of the global stage is fairly stupid. Yes, it's where the money mostly is, 60 billion dollars a year, spread across 3 million people, so everyone's also waiting tables in their spare time. The global stage sucks, everyone is starving, the art isn't really much better, and it's stifling local art because "Julio already did that."

Just make whatever. Honestly, go look Julio up and outright steal his shit. Who cares? Julio might, I suppose, but if so he's dumb. It's not like you're taking anything away from Julio, or that you're making any money in the first place. If you feel bad about it, reference Julio. "Inspired by Buenos Aires artist Julio, you can see his work <here>" or whatever.

Everyone on your block gets to see the cool, or meaningful, or beautiful, thing that Julio invented and that you rediscovered. Nobody loses anything. The world is, in a small way, better for it.

I made more stuff for Halloween, and set it out in a local park for people to enjoy, which I guess some did. We (by which I mean mostly me, but other people are semi-interested) are trying to make it a Thing to do up the local small disused park for Halloween. This is what I made. 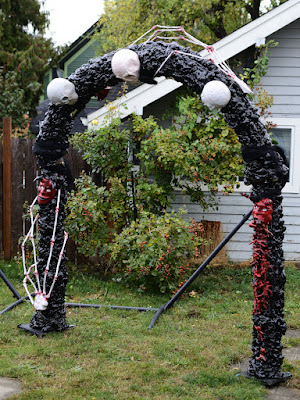 The arch is about 7-8 feet high in the center, the skulls and demon masks are life sized (the masks are actually my face.) There's electronics behind each skull. One is a disassembled flashy-light spooky-sound-effects thing that was playing through the red horn visible between the leftmost and center skull. You can see the flashy light as well, the silvery rectangle below the leftmost skull.

The center skull played bad piano music, alternating nursery rhymes played badly, "spooky" music, and occasionally Rick Astley, all in bangy piano clips played through the black horn below and slightly right of the center skull, from the guts of a very cheap toy electronic piano. The center skull had red LEDs in its eye sockets that pulsed along to the music.

Here it is on the bench, illustrating its awesomeness.


The rightmost skull just had some fairy lights that were wound around the hand on top of the arch.

The effect, standing under it, was somewhat cacaphonic. Overwhelming might be pushing it, but definitely A Lot.

Note, please, the masses of tiny homonculi climbing to be eaten by the rightmost demon. Thank you.

This skull is about 4 feet tall, 3 feet wide. 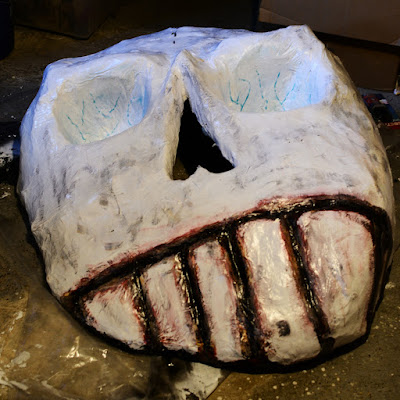 The eyes light up and flash and wink and whatnot in an absurdly complex pattern that took far too long to write the software for.

I consider it possible I went a little overboard. It was pretty fun though.