FSA Photo of the week

This might actually be a pretty well known photograph. It's certainly a kind of photograph that's very well known: 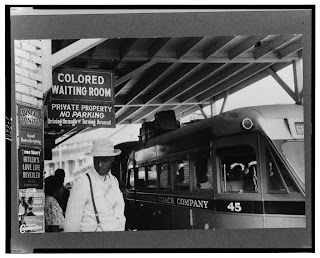 I think there's a little more depth here than the usual social commentary though, especially in the vertical column of posters on the left of the frame. There's a nice eye line in play here, the man looking toward that left side of the frame. The image is, to our eye, entirely about the signage and posters, but there's really a pretty nice composition going on here as well.

This appears to have been shot on sheet film, which makes the "street" aspects here interesting and obviously a bit of a challenge, or luck. For once we have a half-decent scan of the thing, as well, which is nice!

At the bus station in Durham, North Carolina. Shot by Jack Delano, May 1940.