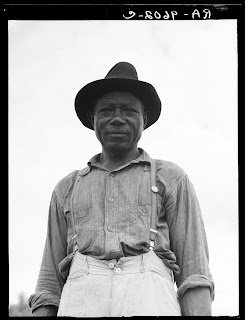 On the one hand it's just a picture of a guy. Dead on, centered, the light's not all that and the guy is just looking at the camera. Typical mildly exploitative photograph of a poor person.

On the other hand, look at the marvelous textures in his clothes. Look at his face, what a great face, huh? Also, what an interesting viewpoint. There's probably something meaningful about this: the female photographer taking a photograph of a black man from such a low point of view, in 1936. The important thing in the photo is actually hard to see, and almost meaningless to us in this era. He's wearing a union button.

Also, a side note to all those people who yell about not taking portraits from a low angle, check it out. It has an impact, it works to achieve a certain thing.