I am a Pictorialist

Here's a picture I made. I rarely post pictures at all, and even more rarely pictures I took. But there's a point here. 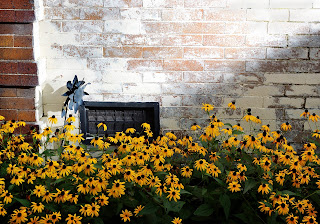 There is a little story here, with some lessons. I have been eyeing this little tableau for some days, pondering the light as one does. I decided that what it needed was a shadow. The shadow that, in fact, it has. My first thought was to wait until the sun was in the right spot and then hold up a piece of cardboard to cast this shadow. SACRILEGE! But whatever. In any case, the sun was failing to co-operate. The sun does not hit the wall at all until it is almost overhead. The angles are completely wrong, even though I am willing to shove an object in there to cast a shadow.

This is where I am a Pictorialist. The light you see is actually a mixture of overcast open shade, and a Vivitar 285 flash shot over a carefully positioned hunk of cardboard I pulled out of the recycle bin around the corner. This is not a found scene at all, this is constructed. There's no picture here without the shadow, in my opinion. This picture certainly does not exist without the shadow, at any rate. So, I put the shadow in.

It reads as real, it is pictorial, it is convincing. It is faked, but so what?

Lesson 1: I am a pictorialist.
Lesson 2: Flash can add darkness just as easily as it can add light, and darkness may be a more powerful idiom.