Lots of people write about The Decisive Moment, with all manner of ideas and analysis. It's not very complicated. When you're looking out at the world, from time to time a moment will arrive when the scene forms a picture. That is, a picture as opposed to an uninteresting jumble of stuff. What follows is roughly a worked example. The result is not the greatest street photograph ever, but it should be illustrative, and that is after all the point.

Some caveats. I am not a street guy. I don't shoot street much, I just take a swing at it every now and then. I recognize and enjoy it, I like the little design and geometry puzzles in Cartier-Bresson's pictures in particular. It's definitely a bit of an acquired taste.

I happened to be sitting in a bus in Vancouver, BC, waiting for the bus to leave to Seattle. The bus had about a half an hour to wait, so I amused myself by taking snaps of what I saw out the window. Across the street was a hair and nail salon, and every now and then one of the employees would step out onto a sort of deck-like structure for a smoke break, or whatever. At the same time, people walked by along the sidewalk.

It occurred to me that there was some potential for an interesting visual interaction between people walking along the sidewalk with people on the deck thing, or maybe with the signage, or something of that sort. I was mainly just idly snapping pictures of people walking on the sidewalk. Mainly girls. I like girls.

Here are some of the snaps: 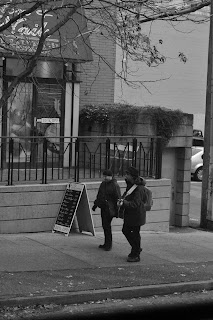 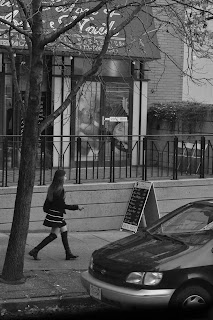 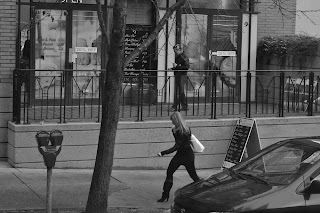 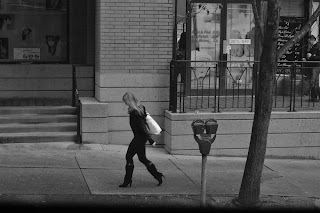 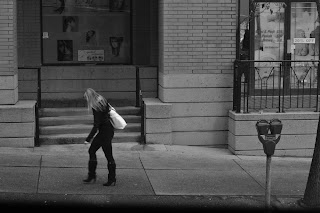 Most of these are not pictures. They're random assemblages of stuff, including a pretty girl. But wait. That one in the middle: 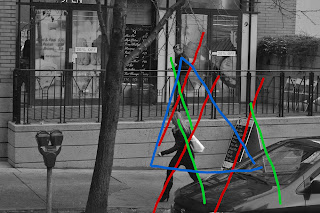 The main problem of course is that the picture which is present is just a part of the frame. Also, the elements are not particularly well eludicated. So we have to crop and pull things out, emphasize some things, de-emphasize some others. The result isn't gonna be any Henri Cartier-Bresson, but it should be recognizably a product of that school. 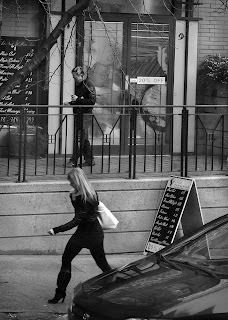 As with all of my rare and mildly successful efforts at street, I was looking for something specific, but pretty small. In this case a pedestrian and a man above, in some sort of visual interaction. What I got was that, and fair dose of serendipity. If I'd shot this one stride later, the geometry would have been stronger. Or, if the man had stepped backward 18 inches, my triangle would have been perfect. Some minor changes in his posture would have been nice as well, although I would not change hers for all the tea in China. It would have been great if that car had been positioned differently.

This is, I think, how it really works. You're looking for something, and you get that something, or close, and then luck grants you a bunch of other things in addition, and you end up with something pretty good.

The decisive moment is when there is, for an instant, a picture. In that half hour in Vancouver, I took a bunch of dull snaps, and came quite close to taking a picture. I got close enough to be pretty pleased with it.