The area around the Chernobyl reactor is a heavily photographed area. During my periodic checkin on Medium Format Magazine, which has struck me as hilarious since inception, I found this article, Photographing Chernobyl, on the free list, and skimmed it. I said to myself, self, these pictures sure look familiar.

So I went hunting around to see what's what. This is pretty interesting.

The reason all Chernobyl photos looks similar is because they are similar. There is fairly obviously A Tour that includes a startling small number of locations, through which photographers are briskly marched. I am going to ruthlessly lift photos from all over the place without regard for copyright because, in the first place, I am performing criticism, and in the second place it is not clear there is a copyrightable originality in any of these things, as I will demonstrate. 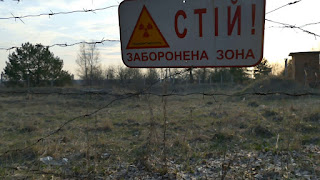 Google something like "Chernobyl danger sign barbed wire" and you will find dozens, possibly hundreds, of photos of this sign. Not this sign design, but this actual literal sign. The arrangement of barbed wire and the building in the background are distinctive. There may be 100s of these signs on miles of fencing for all I know, but this one is the sign that's On The Tour, so everyone photographs it.

The sign moves around a bit. Clearly it falls out of the fence, or falls askew, from time to time, and is put back. By the tour guides? Photographers? Who knows.

Exhibit B, the sea of gas masks with doll: 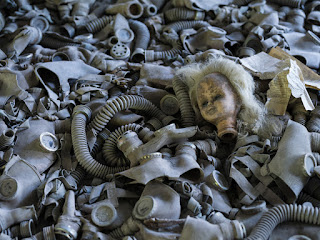 The story here is that there is a room somewhere in what looks like a school, where there are gas masks on the floor. People have brought in dolls and posed them in this room over the years. The dolls move around, are reposed, and in these modern times have largely disintegrated. They have great patina, eh? That's the grease of a million photographer fingers. 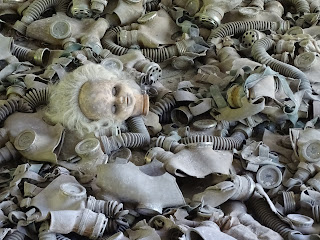 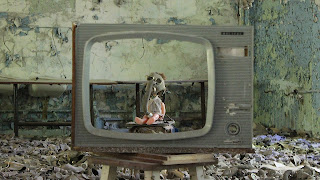 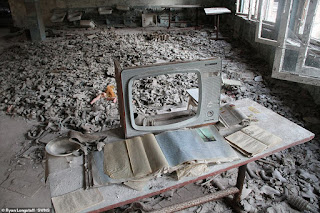 The one thing we know for sure is that this doll was not abandoned by a child on the day of the accident, and left reverently in place. It was probably brought from elsewhere in the area, or just as likely brought in by some photographer as a prop.

Now, this is where it gets fascinating. See the table with the shell of the TV in the foreground? Make a note of that.

Another canonical photo from Your Big Expensive Chernobyl Adventure is the school notebook. 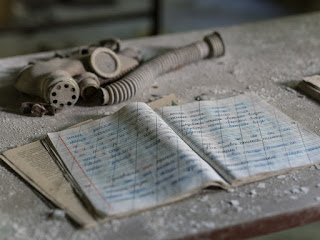 Look at that. The notebook, abandoned one the very day of the accident, undisturbed for decades.

Nah, the notebooks move around constantly. And hey, remember the table with the busted TV on it? Same fuckin' table. Look closely.

There's A Room with the sea of gas masks, the dolls, the table, the notebooks, and clearly photographers go in there and reverentially photograph various closeups over the course of 2 or 3 minutes, creating the impression of many locations (except for the cheaters with the wide angle lenses who give the show away.) Sometimes stuff gets moved around to look better. There's a reason the gas mask is so elegantly draped behind the notebook.

It goes on and on. There are the bumper cars at the fairground, constantly moving around and getting more graffiti, there's the ferris wheel at the same location. The interior of the under-construction cooling tower and.. well, actually that's pretty close to it. There's a handful of other vaguely snapshotty things people pick up here and there, but that is basically the tour.

The standard tour includes something like 10 locations, each are visited pretty quickly. Everyone shoots the same things, sometimes after moving some shit around and then sprinkling dust over it all to look authentically abandoned. And then they go home.

I kind of get why one might do it as a tourist. Sure, these photos all exist, but these ones are my photos. You have, as it were, proof that you were there and that you did the thing. You have personalized memory-triggers of having done the thing.

What does not make sense is publishing this in a would-be serious magazine of Medium Format Photography, or more generally the once-every-couple-years articles in semi-serious photo news sources, The Abandoned World of Chernobyl!, or whatever, as if someone went and did some journalism rather than simply taking the tour.

I am reminded of Maria Lopez, who a few years ago did an Art Thing about the Cambodian Killing Fields, discussed in some remarks of mine over here. She went on The Tour, took The Snaps, and pretended it was a serious photo essay. Maria herself seems to have vanished from the web, or at any rate from the photography part. Presumably she gave up her dream of becoming a serious artist, and went back to her day job (middle management at NGOs, maybe? There were a flock of these people mobbing Souvid Datta a couple years ago, mostly professional NGO types.)