Mostly I don't take requests, not because I hate people but because I have my own ideas. Derrel's pointer to the AI driven drawing robot, though, found me in a receptive mood.

Ai-Da is a humanoid robot. It has one or two cameras in its eyes. It has a plotter-type printer, disguised as a crude arm. It takes a picture of what is in front of it, runs that image file through some sort of neural network algorithm, and renders an output picture using its plotter to render some sort of stylized line drawing.

It appears to be a humanoid robot looking at something, and then drawing the something, but that is not meaningfully the case.

People have been using algorithmic methods for art for some time now, probably quite a bit longer than I've been able to track it back. In 1968 Fred Whipple published a book (?) called Stochastic Painting in which he outlines methods for turning a sequence of random numbers into paintings. It seems likely to me that people were inspired to make decisions in their paintings per the roll of a die or the turn of a card before that, but at any rate we see that Algorithmic Art definitely exists by 1968.

In the intervening 60 years, we have of course seen masses of computer art. Some of it uses only random numbers as input, others use randomness plus other inputs, and some simply transform something given to them, in much the same way Ai-Da does.

The recent addition of "AI" to the mix has been sold to us as some sort of sea change. It is not. What "AI" means, here, is neural networks. Recent developments in this technology have led to a basket of new ways to build very powerful neural networks quickly and easily, which sounds a lot like "we're building BRAINS" but we are not. This is a (deliberate) blurring of terminology. A neural network is simply an algorithm, and not a very complicated one at that. It happens to have been loosely modeled on actual neurons, but it is leagues simpler. It is arguably no more complex than a gear in a watch. The power comes, as in a watch, from sticking a whole lot of these things together.

It is fun to say that we don't know what a neural network will do when given an input. The Ai-Da scammers certainly like to say that. The trouble is, it's not true. We know perfectly well what Ai-Da will do when presented with some scene, or at any rate we could work it out easily enough. The important point is not that we don't know but rather that the easiest way to see what will happen is to run it.

A watch also has this property. You could certainly take a watch apart and count all the teeth on the gears and take detailed measurements and work out what will happen when you wind it up. Or, you could simply wind it up. The latter is much simpler. This does not make a watch a brain, it simply makes it a moderately complex contraption.

The AI industry as a whole is engaged in a bit of a scam. The conceit is, to the lay person, that they are building brains, things with personalities, super-intelligent electronic organisms that may some day take over our world. There is literally a well funded academic discipline on "AI risk" which is, in part, studying issues surrounding "what should we do when we accidently build a super-intelligent electronic orgamism?"

This conceit is nonsense. The AI industry has a small collection of algorithms, often absurdly simple ones, which produce startling results when you set them up right. There is no way they are building, say, conscious beings. Humanity has, literally, no idea whatsoever, what a "consciousness" even is. There are multiple theories in play, and they all share one property: they are obviously wrong.

It is perhaps interesting to note that the credible practitioners in this area tend to use "Machine Learning" or "ML" in preference to "Artificial Intelligence" or "AI.' I have no idea if this is conscious or not, but it appears to me to be a definite trend.

The name Ai-Da begins with AI, so you know immediately that they're selling something. The obvious reference to Dada seems to go universally unmentioned, which is strange because "automatic art" is totally a Dada thing, even though it's not strictly speaking algorithmic. No, she is named (inevitably) for Ada Lovelace, the Only Woman Ever Even Slightly Involved In Computing.

As nearly as I can tell, all Ai-Da proper does is render pencil drawings with a plotter, from photographs taken on the spot. I am unable to locate even a single drawing online, despite the broad press we're seeing here, which I suspect is highly telling. What we see instead are a few derivative artworks, which allegedly start with an Ai-Da drawing, and then are further processed by other software and people. A greenish abstract painting and a sculpture of a really fucked up bee is all we get to see online.

I currently have in my bookmarks this stylization tool. It is a neural network that runs in my browser, it's just a pile of Javascript. It is in no way a brain.

I just used this tool now, as follows. I took this snapshot of me, from within the tool itself, much as Ai-Da might photograph me: 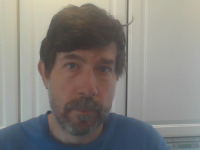 then I selected this sketch from the style source choices:

And I clicked the Stylize button, to produce this:

Bang on some fairly straightforward non-AI code to turn that into code to drive a plotter, and you've literally got Ai-Da minus the creepy animatronics, which Disney has been churning out for decades. Technically, we're also missing Ai-Da's alleged facial recognition software, which presumably allows her to not draw the background just the face. As we all know, facial recognition software is certainly not commonly available in every camera and cell phone built in the last few years. No, wait..

Ok, so, technologically, Ai-Da is pretty epically uninteresting. There's literally nothing innovative here, it's simply a thing one can build pretty easily there days if you have the cash for the custom mechnical systems. I don't think one can even argue that there's any interesting incremental evolution here, given that I can knock out the interesting bits with some Javascript somebody else wrote some.. months?.. ago.

I suspect strongly that the purveyors of this bloody sideshow would assert huffily that they are raising important questions about the nature of humanity and what it means to be creative. Which, sure, they are. People have been raising precisely these same questions since 1968, and to be honest, nobody seems to be working very hard on the answers.

What we do know is that what it is to be human, and what it is to be creative, is definitely not that. What it actually is to be human, or to be creative, seem to be infernally complicated and slippery. Working out answers to these slippery questions, though, does not seem to be materially aided even slightly by, tediously, raising the questions again with some ridiculous contraption.

It does look like they're going to sell some Art for a lot of money.