Sometimes I torture myself by going in to Critique sections of internet forums. I recoil in horror, but I think this particular mess is not restricted to forums. I have this notion that camera clubs do it, and that it is somehow related to things that actually happen in photography school, which boggles my mind.

Someone posts a perfectly innocuous picture, like this one: 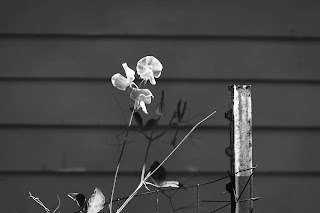 Critique begins to roll in. I would crop a little off the right, because blah blah blah: 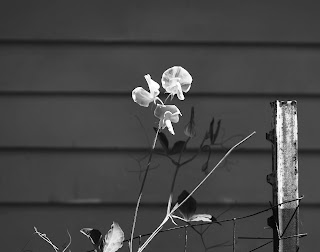 I would crop left, which would something something whatever: 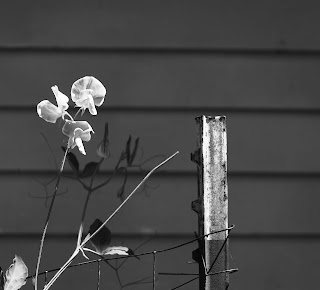 What about a square crop? 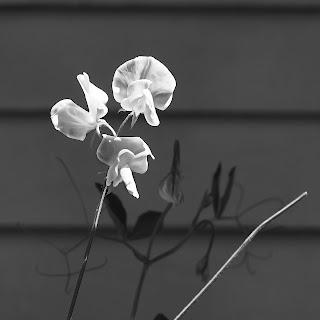 I would crop and then clone out he bright strand which kills the picture: 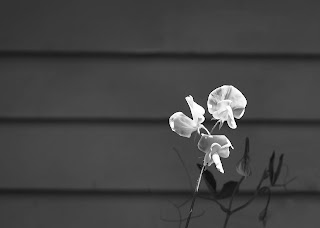 Did you try it in color?

All of these and more are perfectly nice pictures, and they're all different. They will all feel subtly different.

None of these things are going to change the fact that it's a perfectly nice picture of a sweet pea, nothing more. Any of the pictures will do for decor, if that sort of decor suits you and the relevant wall.

There are a couple of underlying assumptions here. The first is that the name of the game is to create Single Great Photos. Which, sure, that can be a goal, I guess. Good luck to you. The second and more insidious is that by taking a decent picture you can hack away at it and make it, if not a Single Great Photo, at any rate maybe close to a Great Photo. And, somehow, by so doing, you learn something, maybe, about great photos?

It's not true. None of these crops is substantively better than the other, absent some specific purpose. As a standalone "pretty good picture" without any notion of a purpose, any crop will do, they're all much the same.

Compare this will Sally Mann shooting "The Last Time Emmett Modeled Nude." By her own account she marched Emmett out to the river and shot photos of him over and over and over. This shot was from too high, that one from too low, this one is framed wrong, can you turn a little, try resting your hands on the water, and on and on and on.

Each of these pictures looks a bit like any of the others. It's a fair bit like the kinds of advice people give in Photo Critiques.

There are fundamentally two differences, but they are crucial.

First, Mann knows that somewhere in here is the picture she wants.

Second, she knows it when she sees it.

With my sweet pea, there is no picture in here that I want. I had nothing in mind but to shoot a technically competent and vaguely pleasing photo for no purpose except to write this blog post. Most people posting photos for "critique" shot their picture for even less reason than that, and they certainly have no notion that greatness is lurking somewhere nearby. Further, suppose I had shot this thing searching for some rightness, whether definable or not, whether articulable or not. Why on earth would anyone imagine that someone else is going to be able to help?

Even if I could find whatever it is, it's something of a gamble that you'd see it even then, and if I haven't found it yet what gives anyone the idea that you're going to be a useful guide?

I suppose if you've never cropped a picture, or cloned a thing out, or whatevered, these suggestions might not be useless? I dunno. The whole thing makes me sad, so I leave critique forums pretty fast.