Here's a picture that's been making the rounds: 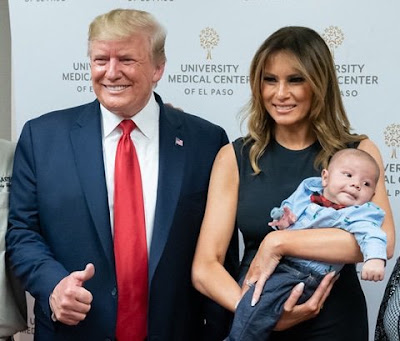 The back story is this: Racially motivated mass shooting in El Paso, among the victims are two parents of a very young child. The parents die protecting the child, the child survives with minor injuries. The President, Donald Trump, visits El Paso in the aftermath, and there are photo opportunities. In this photo, the President's wife, Melania Trump, is seen holding the injured child.

The left reads this as Donald and Melania Trump being sociopaths with the collective empathy of a stick, and perhaps a dopey grin reflex when confronted with a camera. They find the grins and thumbs up gesture in the midst of tragedy to be repellent, vile, and tone-deaf. This is the narrative promoted by leftists of all stripes. Notably it is promoted by leftists who consider "reading" photographs to be an important part of their job. As usual, the establishment photographic theorists treat this politically charged picture as having only one possible reading, their own.

The right reads this picture as Donald and Melania Trump celebrating a ray of light, a triumph of life over death. The gunman intended the baby to die, and was thwarted. Among all the tragedy, one victory for the good guys, as it were. Hooray for the good guys.

Ones reaction to the photograph and its back story depends entirely on where one stands politically. Nobody except, possibly, Donald and Melania know what was in their minds in this moment. You and I certainly don't. We are looking at a pattern of pixels and reading meaning in to them based entirely on the suite of ideas and biases we bring with us.

Humans are good at reading faces, I will tentatively allow that almost everyone regardless of political persuasion will read this as the Trumps projecting a facade of good cheer and optimism. They are performing, as Presidents and First Ladies always do. An expert could probably point to specific features of the facial musculature as evidence of a performance rather than a natural emotional response. That this is performance is in no way surprising, nor really a judgement. This is a photo-op.

The meaning we read diverges when we try to imagine why this particular facade, why this performance?