Something To Look At

Let's take a look at this photo. 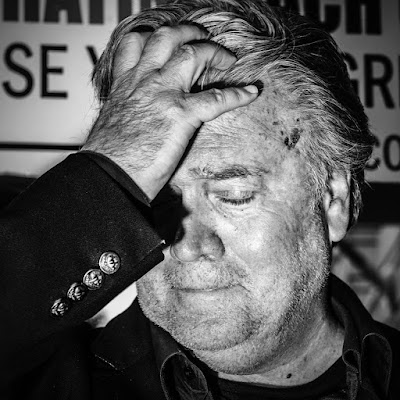 We see a man, older and running to fat. He's running his hand through his own hair, which appears greasy and unfashionably long. He is ill-shaven, and has bad skin, whether from age or from injury is unclear. His hair is grey, his ears have the characteristic enlargement of an old man's, the backs of his hands are a forest of hair. Indeed, this is a very very hairy dude, his ears are hairy, his hands are hairy, and it seems likely that someone's making him maintain his eyebrows and use a nose-hair trimmer, even if they can't get him to groom anything else.

His eyes are closed, his head leans toward the hand, as if for support. His lips appear pursed, perhaps vaguely suggestive of some inner turmoil, but see below. Behind him, some kind of signage which, despite being legible, seems to have been expertly cropped to prevent us guessing at any of the words.

His clothing, insofar as we can see it, is as they say a study in contrasts. The neckline suggests a T-shirt, and there's something of a profusion of collars going on. Over whatever that is, he is clearly wearing some more dressy jacket sporting 4 decorative buttons at the cuff. The sleeve of a shirt protrudes from the jacket cuff. Is he wearing a long sleeved T-shirt? The jacket itself, while clearly leaning toward dressy (buttons) seems also a trifle frayed. The apparent fraying is probably emphasized, if not entirely created, by the strong, harsh, lighting. On the clothes, see below.

The lighting is harsh, somewhat low, and very directional. This feels like headlights, or a simulation of headlights. I don't see any twinning of shadows, so possibly it's just an unmodified flash held low and to the photographer's left. The effect, though, is very harsh, revealing to the point of a kind of nakedness. This is very much a WeeGee vibe.

I think we can comfortably read this as a tired man, perhaps even a beaten man, pinned down under harsh light, revealed and trapped in a moment of weakness. He seems to be neither embracing the camera nor rejecting it, but oblivious to it. The camera feels quite close, though, so the sense we get is not that the subject hasn't noticed, but rather that he doesn't care. Possibly, he is acting as-if he doesn't care, an interpretation which suggests that the act might extend further.

The subject is Steve Bannon, photographed after having been found guilty of lying to Congress. He was photographed by Mark Peterson, who also shot a photo of some cops that I talked about.

Bannon's lips are in fact simply very thin (or possibly he keeps them always pursed) so any impression from the set of his lips is probably a chimera. The chaos of collars and jacket is standard Bannon fare, he is known for wearing at least three shirts at all time. Further, the ill-shaven face is another Bannon tic, something like Boris Johnson's perma-rumpled hair — most likely some dumb but successful attempt to appeal to Regular Guys (Bannon, like all these assholes, is a multi-millionaire.)

What does not appear, at least to my eye, is any judgement on the man.

I am in judgement of Steve Bannon, who I consider to be a worm, and a very bad person. I am glad he was convicted of something, although I think that lying to Congress ought to be mandatory rather than illegal. I mean, seriously, what a bunch of doltish scoundrels. Why would anyone sully the truth by uttering it in those chambers? But anyways, Bannon guilty yay I guess.

If you're a Bannon fan, though, I think you might find much to sympathize with here. This is an intimate photo of a man who's taken a pretty severe blow. There's something of a boxing photo in here, I think, and this is, somehow, the fighter who got the worst of the bout. However, to acknowledge and to reveal the loss is not to judge. There is a strong flavor of pathos here.

If we imagine he might be acting, as noted above, it becomes reasonable to speculate that he's playing to his fans, milking them for sympathy with a routine of discouragement. The pose is, indeed, reminiscent of a drama queen with the back of her hand to her forehead, gasping about her vapors for sympathy. It's not at all clear that this is what's going on, and in fact I am fairly convinced of the genuineness of Bannon's emotions here.

I am glad he lost, and I take genuine pleasure in the loss revealed by this picture. That pleasure, and the source of that pleasure, is in me. I dare say many of my readers will also take the same pleasure, for the same reasons, but I defy you to find the judgement you feel anywhere in the blobs of tone which make up this picture.

You are judging, not the picture.