On Rules of Composition

Let me begin by distinguishing between "rules of composition" and "principles and techniques of composition" in what is perhaps a bit of an arbitrary way. By a rule I mean something like the rule of thirds, or the golden spiral. Something that tells you specifically how to arrange things in the frame. A principle or technique might be to "use leading lines" or "lead the eye to the subject" or "balance visual masses within the frame". A rule tells you where to put things in the frame, a principle tells you how people look at pictures. There's probably overlap. Such is life.

Poking around various web sites for these "rules" is always an exercise in hilarity. You'll find examples of "rule of thirds" with lines carefully drawn through the subject, and nowhere near a one-third line, you'll find ludicrously squashed golden spirals. You'll find golden triangles proudly drawn on top of examples images that bear no graphical relation to the drawn figure whatsoever.

There are two ways to approach this, or perhaps two ends to a spectrum of ways. One can say that in order to be judged "compliant with a rule" the main subject and other elements must be exactly placed according to the rule. One can also allow a moderate degree of latitude, and say that the main subject and other elements must only be placed approximately in the right places to be deemed "following such and such a rule".

One gets in to trouble in both directions.

Rules of composition tend to be very crop-sensitive. If you change the crop, the designated locations for subjects and so on move around, sometimes quite dramatically. Surely a great photograph remains great if you shave off 10% on one edge or another? Or at any rate many of them do. If you demand extreme precision in placements, you will find almost no good photographs that follow the rule -- although you will certainly find many postcards and calendars that have the bear's nose, or the boat, or the top of the waterfall slavishly placed exactly on the intersection of two 1/3 lines. These photographs would in general be improved by any crop at all, the more complete the better.

If you permit rough compliance, then many more good pictures will be found to be in compliance with some rule or another. If you have enough rules, you can find one for any occasion. This image: 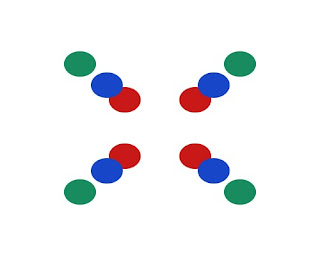 Shows the subject placements in a 4:3 crop permitted for Golden Triangle, Golden Spiral, and Rule Of Thirds, if we permit a 5% deviation in any direction, which isn't really all that loose. It's not quite "stick the subject anywhere but in the middle and on the edge" but it's inching firmly in that direction. The Golden Spiral doesn't even apply, really, to any crop except the Golden Rectangle, which nobody uses, anyways. You can, of course, apply your rules of placement to a rectangle within the frame, not to the full crop, but at this point all bets are off. Now you have an more or less arbitrary rectangle in the frame, with presumably some slop to it, and then you're putting things inside that rectangle with their own fudge factors.

Why not just say "stick the things that matter in the frame, not at the edges and not in the center, unless there's a good reason for it"? Why not talk about balance of visual masses, eye leading, and so on?

It is absolutely the case that every rule of composition can produce a pleasing balance of forms within the frame. To codify these things as rules, however, is to place the cart well before the horse. We might as well say that to produce an appealing cheese, you should wrap whatever it is you have handy, some milk solids, old clothes, a dead cat, perhaps some mud or a set of house keys to a house you no longer own, in a layer of suitable wax and place the result it in a cave for a few months.

This is, after all, how many excellent cheeses are made. So it works, some of the time.