Here is a photograph by Alfred Stieglitz, which I have examined before in these pages. 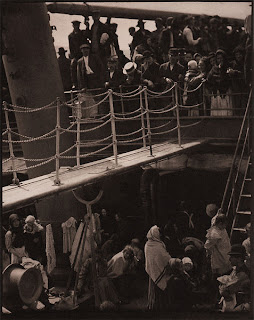 I suggested previously that it was something of a rule follower, which it is to an extent. Understood in terms of classical composition rather than modern photographic "composition", though, it completely falls into place. The excellence is immediately understood as a consequence of the photo's adherence to visual ideas that we simply work. The "rule of thirds" has nothing to do with it.

There are many lines in the picture, none of them quite parallel, and none of them quite perpendicular, but certainly grouped into more-or-less vertical, and more-or-less horizontal. The lines give interest and a sense of regularity without being tedious and repetitious. There is a bright white spot in the hat, and a sightline from the white-hatted man down to black-headed figures in the steerage connecting that light spot to the darker spots below. There is a light region, contrasting with a dark region. There are spots of light and dark in echoed configurations. There is even a strongly pyramidal collection in the darker mass of the steerage topped by the man in the white hat.

Viewed as a nineteenth century painting, this thing is practically textbook (except for the subject matter).

The point here is that there are a bunch of elements which we recognize after the fact as being part of many successful compositions, and they have been applied here with excellent taste and balance. There is variety, and there is unity. There is visual balance. You can't really measure these things, but you can see them when they are present, and you can to a degree learn to apply them yourself. There is no royal road to a good composition, but there are some signposts, some blazes on the trail.