A couple of relevant essays I have written in the past: pre-visualization and inspiration and a post on terminology I am citing a lot since I am using some pretty specific and idiosyncratic terminology. You may have read them before, and they're not mandatory pre-requisites. Just precursor material to what follows here.

Over the weekend, I had some time, so I decided to perform an exercise.

I would select an object, at random, and attempt to discover an inspiration, a eureka moment, in how to shoot the thing. The process here is, as I have noted in the past, to alternately think about the problem, and to take breaks from thinking about the problem, until a solution pops into one's mind. This can take a while. In this case, it was a day or two later that my inspiration occurred, such as it was.

The object I selected was my wife's bicycling helmet. I started out looking at it, pondering it in a fairly vague sort of way. I shot a couple pictures of it with my phone: 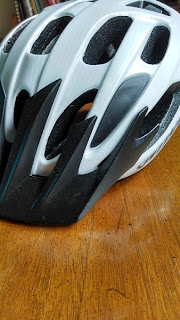 Pretty uninspired, but the idea was to simply have a record shot so I would know what the thing looks like. After noodling on it a bit, I moved on to other things.

Over the course of the next couple of days, I came across the pictures on my phone a couple of times, and noodled some more. My usual technique is to simply bury the thing in shadow. Heavy chiaroscuro and call it good, but I wanted to not simply revisit old tricks with this exercise.

At some point a couple of days later came the inspirational moment. Not a big one, just a little "aha!". It went like this:

I was thinking, for the second or third time but I don't want to just bury it in shadow when the critical thought occurred the holes, something about the holes. My first idea, discarded almost immediately, was to skim a light across the top, burying the holes in shadow. A white helmet with inky black holes. The next idea was no, put a light inside it, and have rays of light beaming out from each of the holes! I forget precisely the circumstances, but I may have been on the verge of sleep when this happened. That's typical. Showers and baths are also good times. After a sufficiently long period of thinking about the problem, and resting (not thinking), a proper period of restful, semi-conscious, vague thought on the problem can often cause a solution to bubble up to consciousness.

This was the concept I had in mind today when I revisited the helmet to actually shoot it. That was the moment of inspiration -- the holes! Now we get to perspiration and serendipity, and how ideas don't always work out the way you envisioned.

I set up the helmet with a flash inside it, and took some shots to calibrate composition and exposure, roughly. 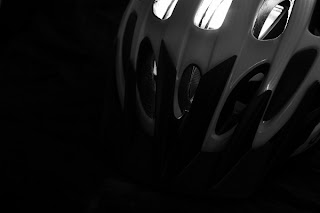 That sucks. You can see the flash, and there's no light coming out most of the holes. Let's wrap that flash up in a pillowcase and reposition a bit. 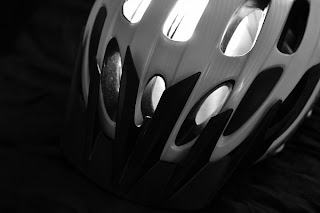 That's more like it. Now for some rays. Hmm. What happens if we spray a water mist around? I had a feeling this part was not going to go as planned, and I was right -- making well defined "light rays" is something I have not mastered. Or apprenticed. Or even started figuring out, really. It's a total mystery to me. 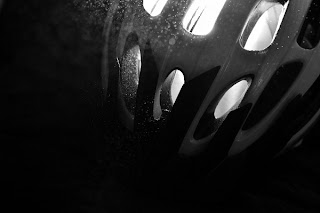 Ok. Huh. That's not really at all what I envisioned, but it's definitely something. I'll take it! Crop out the ugly bits, tighten it up a bit, dodge up some of the features of the helmet and vignette gently to close up the frame, and call it done: 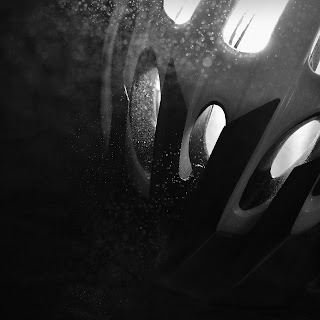 Inspiration, brought about by planting a problem firmly (How shall I shoot this object) and then alternately thinking hard about it and relaxing and thinking about other things, or nothing at all. A couple days later, inspiration (holes, light rays). Perspiration, actually try to shoot it, tinker with what we have on hand. Work toward your inspired solution, but be open to possibility.

Now there's a visual idea in play. You can invent some meaning to go with it, and to build a portfolio around. Perhaps we are envisioning the athlete a glowing force. We shoot sporting equipment with the athlete represented by brilliant light. We bring in environmental cues to suggest rain, wind, sleet, mud, to express some notion of athleticism in the elements, in tough conditions, against difficulties. One picture doesn't suggest this idea at all, but 4 or 5 or 10 would make the concept quite clear, and now we have a portfolio that's saying something.

An idea that is unclear in a single picture can be made obvious across a series of pictures, a portfolio. Or a campaign.

There are probably other equally strong ideas, I don't know. This is the idea that occurs to me right now. If I wanted to pursue this theme I might well try to build a portfolio around these ideas -- these kinds of subjects with these kinds of ideas carried by one or more renderings. As for use I don't know. This feels like a prototype for some kind of advertising campaign, perhaps.

And that's how I do it. Perhaps it will help you find your own process for inspiration.