Man, this article just keeps getting the traffic. Is it all just one of you true believers checking back to see if I've issued a retraction and acknowledged my wicked ways, or is this thing turning up in web searches, or what? - Andrew 5/24/17

I've been reading more about this to see what the heck it's all about, and I have to say to a mathematician with pretensions of understanding a little about Art, it's comedy gold. This is a guy who either started, or was deeply embroiled, in the early 20th century fad of "explaining" Art with simple geometry. He's all over the Golden Mean, and he's got this glorious system of drawing lines all over the place. He also gets in to spirals, but I couldn't face reading any more by the time I got there.

Mr. Hambidge began his career attempting to explain the beauty of the greek vase, and wound up unlocking the Lost Secret of the Greeks. My father was a classicist, and I can assure you that the ancient greeks were literate and had, indeed, a complete system of writing. The fact that Hambidge cannot refer to a single line written by an actual Greek on this subject, and has to resort to a single line of rather vague allusion written by a Roman which he himself allows is pretty suspect renders the whole Rediscovered Secret business ridiculous. While it's possible that we have, somehow, lost every relevant text, while it's possible that the secrets of Dynamic Symmetry were held closely and never written down, Occam's Razor dictates clearly that this is not the hypothesis we ought to be working with.

In actual historical work, Lost Secrets are generally either Not Lost, Not Secret, or Not Real. Sometimes all three. This one falls clearly into the Not Real category.

But let's look at Dynamic Symmetry itself. Mr. Hambidge is remarkably obscure on what it actually is, but it seems to come down to using proportions which include square roots. Rather than boring Static symmetry based on ratios like 1:2 or 2:3, we go for the more exciting of 1 to the square root of various things. Sadly, any irrational number can be approximated as closely as you like by a rational one (that is, a ratio of whole numbers), so the whole premise falls apart instantly. If you're willing to fudge a little, and Mr. Hambidge is, then the difference between his "root-two-rectangle" (sides in the ratio of 1:1.41421356...) and a 2:3 rectangle becomes negligible.

Mr. Hambidge has this lovely system involving a variety of rectangles, which he then adorns with various diagonals: 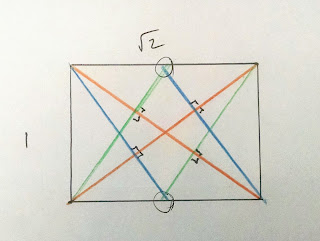 First draw the diagonals (orange) and then you drop perpendiculars to those diagonals to the opposite corners (green and blue). The rectangle with ratio of 1 to the square root of two has the pleasing property that the blue perpendiculars and the green perpendiculars land in exactly the same place on the long side (please forgive my shabby drawing, the circled area shows where the two lines ought to meet exactly on the side). It's a perfectly pleasing shape. Here's the same deal on the 2:3 rectangle that was standardized by the 35mm frame: 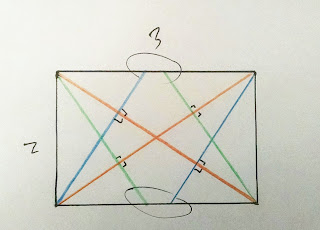 As you can see it is totally different from the Dynamic root-two rectangle, being only boring old Static symmetry. Or, no, wait. That's insane. They're actually pretty close, and if we're slopping things into a frame with a paintbrush or a camera, they're going to come out indistinguishable. If we refer to Mr. Hambidge's explanations of How This Explains Everything, we find him introducing at least this much slop in order to force pictures to fit his model. If you're willing to go as far as 7:5 (boring, Static), the difference becomes virtually invisible. On, say, a 20 by 28 inch canvas, you can draw that same mesh of lines to be, on average, 0.14 inches off of the "perfect" ones from the root-two rectangle.

Notice that the perpendiculars are starting to land on that long side with a little gap, which gets larger as the rectangles get longer and skinnier. Don't worry, Mr. Hambidge has a solution, which is to shove in some more lines: 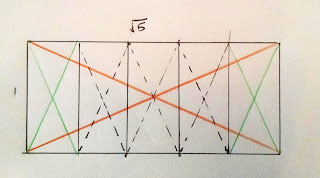 This isn't even a complete set. I am moderately certain that at least some statements of Dynamic Symmetry allow you to draw in a lot more diagonals, but let us take this as the basic set. As if this was not enough, you can chop his rectangles in to smaller ones, and draw the lines in those instead. Imagine, if you will, 5 copies of the rectangle above stacked on top of one another. The result is a rectangle with the same ratio of sides, but instead of merely 12 diagonal lines, you have 60 of them to play with. If that doesn't work, you can rotate the whole mess 90 degrees. Since most of his rectangles are too skinny to actually describe much actual Art, Mr. Hambidge also introduced a system by which you can shove his magic rectangles into other shaped pictures by padding them with squares and rectangles. This allows you to shovel his bewildering nets of lines around almost arbitrarily in the frame.

Now, it is worth noting that the square root rectangles are exactly the ones where this business of drawing that perpendicular to the diagonal will land on the long side in a good place. In general, a 1 to square root of N rectangle can be divided up in to N equal rectangles, like a loaf of bread. Each of those N rectangles will have the same proportions, and that perpendicular thing will land as the diagonal of the new, smaller, rectangles. Each of the five rectangles in the thing above is similar in the strict geometrical sense to the surrounding one.

Which is neat, but seems to be apropos of absolutely nothing. Who cares, ultimately?

The general method for Explaining Art a la Jay Hambidge is to locate any sort of diagonal things in the frame. These can be actual diagonal elements (the girl's arm, the pier, the fence) or you can just look for single objects (the face, the urn, the flower). Then you sift through the family of magic rectangles seeing which one gives you the most near-coincidences when you slide it around to best-fit. Then you pad it into place according to his remarkably flexible system of compound rectangles and if that doesn't quite work, you crop the original a little to get things to line up a bit better.

In a pinch you can just give up padding entirely and shove the magic rectangle of choice into the frame in the right spot, and hope nobody notices.

See, for instance, Bellows' painting of Dempsey and Firpo, which places various legs and things per the "root 5 rectangle". This painting was allegedly designed by the painter to fit, and it sort of does. But the magic rectangle in question has to be placed just-so in the frame, and even then the alignments are somewhat vague. It's certainly credible in this case that it was deliberate, since we (apparently) have the painter's affidavit as it were, but that doesn't make the alignments any more precise.

This is, essentially, a variation on the same game whereby the golden ratio is found everywhere, but being much more complicated, it really feels like you're uncovering something.

In short, Hambidge was a complete humbug. I suspect that he believed his own nonsense, but only because he lacked any of the right sort of precise critical thinking. He was clearly in love with simple geometrical constructions, and also want to Find The Secret behind making things look good (there is no secret, it's just good taste and practice).

As noted, this particular flavor of quackery was quite popular in the first half of the 20th century. Mathematics and Science were going to explain everything. Photographers, gravitating naturally to methods, systems, procedures, adopted this sort of thing with a glad cry, and continue to do so. Note, for instance, this fellow who appears to be trying to make a business out of selling, at a rather handsome price, a system invented by other people (he's also buying amazon reviews, oops, but don't worry I turned him in already). Tavis doesn't seem to be buying reviews any more, good for you, Tavis!

This doesn't seem to be a terrible system for organizing things, if you're trying to make Art. There's some pretty nice looking diagonals going on there, which you could choose to use. Myron Barnstone has a whole system of drawing that's probably less crazy than Hambidge's full system, and he can draw just fine. I dare say some of his students can as well (incidently, what Tavis Glover, the chappie buying amazon reviews, seems to be selling is pretty much a retelling of Barnstone's system, which begs the question of "why not buy Barnstone's?")

I would ditch the square root business, though, that's just silly.

Still, there ain't no substitute for taste.