While I was in San Francisco last weekend, I did more than stop in to the Arbus show. I stopped in to SF Camerworks to see whatever they had up, which turned out to be an exhibit of Sanaz Mazinani's work. I apologize in advance, I feel sure that I have mangled the artist's name at least once in what follows.

This work is mixed media, ultimately rendered as a sculptural wall-mounted object. There's a few other things in the show, a chunk of wallpaper she designed around her methods, a sculpture of colored glass and black rods, some window installations. I will ignore these, except to note that they illustrate her capacity to grow, to experiment, to evolve. The main thrust of the show is the collection of pieces I will now discuss.

Initially the works read each as a set of flat planes with an appealing kaleidoscope-esque pattern of colors and shapes on them. The impression is of a peculiarly angular and quite beautiful flower. One might also read into the large shape, sometimes, some flavor of the planarity of modern "stealth" military vehicles, a B-2 bomber or a Zumwalt class destroyer. This is much more likely after some time spent making a closer inspection of the piece.

The attentive and appropriately knowledgeable might immediately notice the deliberate references to Islamic art, which is often non-representational patterned mosaics and the like. 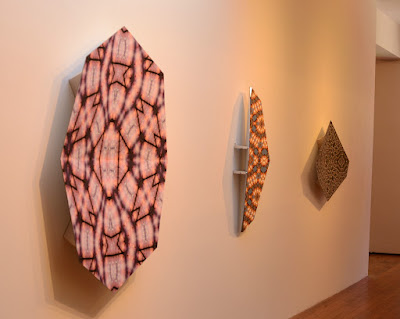 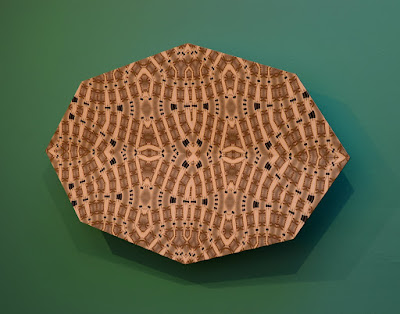 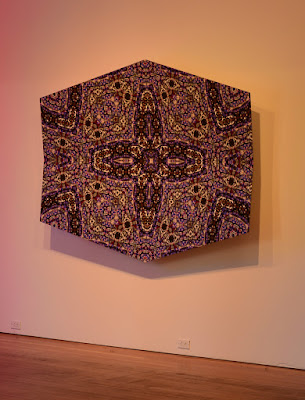 Stepping closer, it becomes clear that these patterns are built of of repetitions of smaller fragments. Perhaps you notice the American flag, or you realize that the attractive yellow/orange color is actually a tiny explosion repeated, mirrored this way and that, across the panels of the piece. Closer inspection will unpack more imagery. How much is visible depends on the piece, and this is one of the ongoing problems I find with the work, about which more anon.

It becomes clear, especially after inspecting at least a couple of the works, that the underlying pieces of the patterns are photographs, or fragments of photographs. It is, I think, reasonable to assume that in all cases you'll feel that the photographs are essentially military, political, or both in nature. In some of the works the scale is such that the underlying nature of the photographs is obvious, you can make out quite a bit of detail. In other works you can apprehend enough of the detail, a critical mass of detail, with some effort. The details in these fill in gradually as you work out what you're looking at, the abstraction gradually peeling away. In some of the work, the scale is simply too small to make out much of what's going on in the underlying photographs. You can make out, perhaps, a fragment of a flag and you can tell that there is more but you cannot make it out. 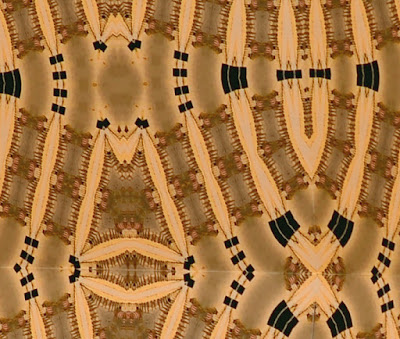 The other problem I see is that the provenance of the photographs is often important. Without knowing that one of the more visually incomprehensible pieces is made up of redacted photographs of flag-draped caskets containing the bodies of slain American soldiers, being carried by other soldiers processionally, the dark rectangles in the pattern do not make a lot of sense. The title of the work contains the word "redacted" but doesn't tell the whole story. 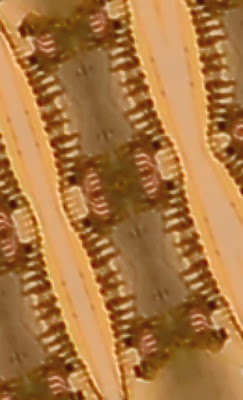 The fact that these photos were not available for a time, and then later made available and only in a censored form, matters. It is the key to understanding what the piece is about, and there is no way to deduce it or even, really, feel it, without being told. I had guessed that the flag shapes might represent coffins, but I did not know if the artist had made the shape through the patterning process, or whether it was part of the original underlying photo, and I don't think there was any way to know.

In general, there is a problem is density. Visual density is sometimes too extreme, rendering the finest layer of visual incomprehensible, other times it is too coarse rendering the effect one of a mere collage. Information density is always too great, if you don't know what the underlying pictures are of and what their provenance is, you have no chance of really grasping the meaning of the piece. It will be, at best, an attractive pattern with some largely unknown but obviously political meaning.

Now, I certainly don't oppose the idea of unplumbed depths, of mystery left mysterious. These works are, however, inconsistent in where they leave off, and in my opinion frequently leave too much beyond the pale and unknowable.

I think Ms. Mazinani needs to find a way to fill in, to some degree or another, those unknowns. I know the provenance of the pictures in these works because the immensely nice chap working at SF Camerworks walked with me and told me, but it seems impractical to include him with the work. A brief artist's statement next to the piece would fill the bill for a gallery show of the sort I saw, but that seems clumsy when selling pieces one by one.

Although I found these pieces inside SF Camerworks, and although cameras were involved somewhere in their production, I'm going to go out on a limb and assert that these pieces are emphatically not photography. For a couple of reasons.

First and foremost, a photograph is something one can apprehend in a moment, it is the essence of still photography, it's what makes a photograph a photograph (yes, yes, abstract this, abstract that and so on, I hear you, I'm choosing to ignore you -- bear with me). These are something else, they demand time and study to even begin to make headway on. They're not video, since you approach them on your own schedule, not the artist's. They might be poems. Some photographs are also poems in this sense, in the sense that they unpack, with labor, into a larger structure of meaning. But these aren't photographs.

Second, and secondmost, one could readily substitute political cartoons, brand logos, campaign posters, and Ms. Mazinani's methods and ideas would translate perfectly. The work wouldn't even look different. It is the transformation of underlying material that is itself charged with meaning that makes these objects work.

My complaints aside, I find the work fascinating and in many ways excellent. I very much enjoyed the layering of meaning, from the beautiful flowerlike shape, drilling in to the political, the anti-military, leading perhaps to the re-understanding the large shape in terms of a stealth aircraft. The work invites close inspection, it rewards time spent with it. It invites you to stand back, to approach, to stand back again, to reconsider. It's literally trivial to spend 10 minutes with one piece without getting bored which is, let us be honest with ourselves, truly remarkable for a static piece of art.

I do think Ms. Mazinani would be rewarded by a careful consideration of the problems with density. Not to suggest that she needs to pick a singular solution and to stick with it, only that she consider it, and ponder going forward how she can better reward the careful study of her future pieces, how she can help the art viewer fill in the little details that really drive this work.

If these be poems, then a few (perhaps 1, or maybe 2) of them approach doggerel, and a few are simply too densely "written", and several of them are Just Right. More of the Just Right, please!

I think this artist has huge potential. The work is exquisitely collectible. It's right-sized, big without being ostentatious. It's beautiful. It's dense with ideas and meaning. It's just plain fun to be with. And, she has demonstrated that she can produce, she has demonstrated that she can evolve, that she will be able to produce a body of work that is connected, coherent, without being repetitious. Will she "make it"? Well, to an extent she already has, having enjoyed various success here and there. Will she be launched into the stratosphere of, let me pick the first name that comes to mind, Jeff Koons? Beats me! Probably not, luck being what luck is? But the potential is there!

I'd be happy if she did!