Diane Arbus: In the beginning

Diane Arbus is quoted, from time to time, as saying something like a photo is a secret about a secret which is exactly the sort of poncy stuff an arteest might say. But let's see.

The SFMOMA has a show from the MOMA on display now, entitled "in the beginning" which covers a body of Arbus' work that I have not seen before. It turns out that she shot with a 35mm film from the mid 1950s until 1962, when she got a wide angle Rollei, and everything changed. All the iconic pictures seem to be from after 1962. So this show is about the 35mm work, and it definitely provides context.

First, let me remark that the show is hung like shit. It's hung in a maze of identical white rooms, in chronological order but only once you work out what the insane ordering of walls actually is. Walking the work in order is, I think, literally impossible without regular diagonal trips across rooms. I got lost repeatedly. It's ridiculous. And then the show segues into a bunch of larger square pictures, and there's a big gap in the chronology because what you're looking at now is, suddenly, a completely different show. Arbus did a "box of 10 photos" portfolio, which consisted entirely of medium format work. These are, for the most part, the pictures we know about. But the way the show is hung, you don't really notice, or you notice that things are all different, but why? What just happened?

So, it's a mess. Honestly, who the fuck put this thing together?

But anyways, the work. Once you sort out the mess the curators have made, you can get to work and see what's what.

The first thing that strikes me about the 35mm work is how much of it is, from our modern perspective, completely ordinary observational "street" photography that we now know can be ground out by the tonne by anyone with a small camera and the right sort of obsession for mashing the shutter button. People sitting on trains. People standing around. People at the movie theater, etcetera.

This is perhaps a quarter or an eighth of the show. Enough that, in our modern world awash in this garbage, it sticks out.

Half of the show is clearly Arbus finding her way. It's people wearing masks, it's cross-dressers, people with tattoos, circus clowns, circus people, photographs of the movie screen, photographs of people watching the movie, photographs of players backstage. Arbus' obsession with masks and masking, both literal and figurative, is fully in bloom here. She is exploring these ideas, figuring out what works and what does not.

We'll circle back to the masks and circus people in a moment.

Another good sized chunk reads as those tedious "street portraits" which people are constantly shooting these days. "Interesting looking" people (freaks, weirdos, overdressed and underdressed people, and so on) shot in a sort of spontaneous portrait style. These I dismissed initially, because again we know now that you can grind this garbage out wholesale. I was, I think, wrong. There's something a little different with Arbus.

What I saw, eventually, was that her "street portraits" are often actually of the moment the victim becomes aware of the camera. The eye contact of the street portrait is there, the awareness, but the victim has not yet formulated a response. It's a fleeting moment when, if you stretch a point slightly, perhaps, the "mask" goes up. The victim sees the camera, the photographer, and assumes an expression. Perhaps a blank stare, perhaps a smile, perhaps an angry stare. It's an opening move, to cover, while the victim decides what to do next. Should I mug for the camera? Tell that woman to stop? Yell at her? Turn away?

My take on it is in fact that Arbus reads this first response as a mask of sorts, and that's precisely what she wants. She's interested in layers that conceal, layers partly but not completely peeled back. The mask covers the eyes but not the mouth; the cross-dresser is bare-chested, and so on. You can peek past the masks, and get at something, but not everything.

Whatever these street portrait-like things are, it's definitely not what happens in the 60 seconds after some smarmy asshole named Eric Kim or Brandon Stanton asks "May I make your portrait?"

Arbus wasn't "making" no damn pictures. She was "taking" in all the senses of the word, make no mistake about it.

Random notes. Arbus liked a good Pietà, two pictures of parents holding sleeping children appear. She enjoyed the grotesque, giving us a wax museum murder scene, siamese twin fetuses in a jar, an autopsy, a dying old woman. She seems to have had an affinity for children. To my eye the two best pictures she every made were 35mm photographs of children on the street.

The themes she would explore with the medium format rig are all present, but in a vastly more spontaneous way, and in I think a much much stronger way.

When we, wandering through the museum, crash confused into the medium format collection of 10 photographs, mostly from much later, we find a much more formal and stagey flavor. It all feels like a surreal and while not precisely posed, perhaps a little forced. There's still the sense of layering, but it has that Eggleston "the suburbs are actually Hell" flavor rather than the urban grittiness of real people with real layers and real secrets. We know now that the kid with the hand grenade is a scam, she has a whole roll of a perfectly normal kid playing with a toy, and one frame of him making a weird face. The pollutes the rest of the square pictures, I at any rate feel like they're probably all scams.

The 35mm work feels a lot more spontaneous and real. They're also a lot more banal. There is no hint of deep darkness, just the ordinary kind of darkness. With the medium format, one feels that she stopped trying to find masks and mask analogs, and started in creating them. She leaned on the slightly weird look of the wide lens, as well, relying on that look to lend a bit of pop to her efforts to find the surreal in the more or less ordinary.

The 35mm work has some really strong ideas in it, but I think much of what we're being shown is in the spirit of exploration, of testing. A great deal of it looks like random experiments in bullshit. As a body of work it really shows what she's thinking, where she's going, but it doesn't read very well as final product. She kind of needs 100 pictures to get the point across. She seems to have thought that the medium format work was the final product, the distillation of the former work. I think the curators at the MOMA want us to accept this narrative.

I think it is wrong.

I think that the 35mm works shows a lot of ideas, I think she's building up a strong vocabulary, she's exploring ideas and methods that have potential and which from time to time produce some really good stuff. Then she gets a medium format wide angle camera and the wheels fall off, and she becomes Eggleston's antecedent, and that's about it. She wandered off into the weeds of a sort of false notion of masks and masking, started printing big, sold some stuff, and that was pretty much it. Then she killed herself. Well, fuck.

If I were pulling together a box of 10 Arbus photos, I wouldn't have much trouble pulling the best of the lot of out the small camera work. My box of 10, I arrogantly submit, would be a hell of a lot stronger than her box of 10. If you asked me for 20, well, I'd have to salt the box with a few duds. Because the final portfolio never really got made. 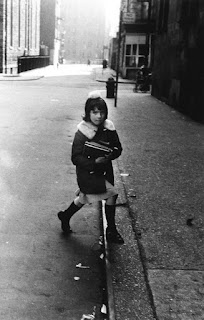