Orientalism, Revolution, And All That

I am reading Edward Said's book Orientalism and finding it almost infinitely irritating. Of course, it specifically sets out to irritate people like me, so I suppose that's a success of sorts. Leaving aside the many criticisms I could offer (and recognizing that it's rather heavy sledding and I am, accordingly, not very far into it), he's got at least one very good idea. My intention is to grab hold of this idea, and to run with it.

Said is interested in the "large structure" of cultural thought, that gestalt of literature, poetry, scholarship, art, politics, and so on. He remarks that it's all interconnected, it all supports itself in a vast self-referential structure. Any individual item, let us say a poem, is simultaneously a symptom of the intellectual system of which it partakes, and a supporting part of that system. Said is largely interested in the ways Euros say mean things about Islam, and points out that things like a speech made by a British Colonial administrator both help to construct the system of thought, as well as being a natural product of that system.

This is, if not purely a restatement of remarks I have made in the past, at any rate related. I have talked about the gradual drip of change, the continuous stream of say, photographs out of Vietnam which helped to but did not ultimately generate the political shifts that ended the US involvement in that conflict. These photographs were simultaneously a symptom of political change in progress, and supported, fueled, that change. History seems to select a more or less random collection of iconic points to identify as "the causes" of the change, but this is, I feel, in error.

With this framework in mind, I have reconsidered my occasional forays in to "foreign" photography. I was disappointed with the Archive of Malian Photography, but I see now (I think) that I was foolish to hope for some instantly recognizable Malian-ness to the pictures. Of course the pictures look vaguely western, photography originated in the west and was extensively practiced in the west before it got to Mali. Of course the Malian photographers and subjects will follow, roughly, the model available to them. After all, to them no less than to us, this is what photography is. It looks like that.

Anything essentially Malian about this body of work will have to emerge from the gestalt. Those structures of thought, of culture, that make up whatever it is that is essentially Mali (insofar as that even makes sense) will not reveal themselves in a single gesture, a single picture. It is a basic human fallacy to imagine that a foreign culture is revealed in a handful of colorful costumes, a poem or two, and perhaps a charming dance. It is not more sensible to imagine that a handful of photographs will reveal Mali, somehow. Indeed, because photography is so imbued with western-ness, such an idea is even sillier. If I want to find Mali, or South Africa, or Vietnam, or Poverty, or Swing Dance in photographs, I will need to look at a bunch of them and I will need to take time with the context that wraps around them. 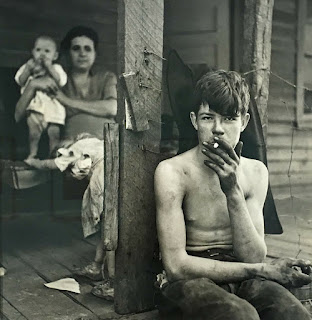 by Alfonso Iannelli was presented in a forum as "not needing words" to grasp. My response was that it is easy to grasp precisely because we're seen an enormous number of these pictures, accompanied by a lot of words. The picture is, transparently, an execution of the FSA style, and as such is trivially read as American Poverty, Depression Era, Southern. This is, it happens, more or less correct. But we can read it as such only because it exists in the shadow of an enormous body of propagandist work created under the direction of Roy Stryker, specifically to create that big structure, that Idea of America, that would support the FSA's mission. This photograph is a consequence of (a symptom) of the labors of the FSA photographers, and it also supports and expands that same Idea of America.

Walker Evans would never have printed this one, he'd have used another frame where the dog is more fortuitously positioned, but it is clear that Fons Iannalli was copying Evans and the FSA work. ETA: Dog? What dog? Good lord, what was I thinking? The child in the middle ground, half-lying, hiding her face (note the reference to Migrant Mother here) looks sort of like a dog, and she is by golly really badly positioned, but she's not a dog despite the accidental resemblance of certain features.

The FSA's photographic work is, in small, much like the system of thought Said names as "Orientalism", in that it is a self-consistent, self-referential, body of work that represents an idea of something. Said's point is that the map is not the territory, and that the idea represented is not the thing itself (again, this is the sort of thing that excites the undergraduate mind omg the thing and the reference to the thing are different omg omg).

To grasp an Idea of Mali, one needs not a handful of pictures, but a complete body of work. But even that will not be Mali, it will be merely an Idea of Mali. Alas, this is about as good as it gets. It turns out that we can no more fit Mali physically inside of our heads than we can The Orient, so there it is.

Which leads around finally to the Revolution promised in the title.

I am currently engaged in a long term project, the same long term project many of us "lefties" are engaged in. We perceive a problem with global wealth, with capitalism as it exists today, and so on. We're unhappy with the concentration of wealth in the hands of the few, and we feel that it is doing a great deal of harm. There's a lot of stuff going on, lots of unhappy people grumbling in one way or another.

People tend to seek the single big push, the one action of set or actions that will produce victory. Go on this one protest march! Impeach Trump! Write your congressmen!

There is no decisive battle. Indeed, it's not clear that victory is even a meaningful concept here. All of these actions are symptoms as well as supporting structures of a set of ideas, a system of thought, an intellectual construct which involves less capitalism, more social justice, etcetera and so on. A gestalt of ideas, roughly (but only roughly) agreed upon across the board. This construct is in competition with others, we can speak of the alt-right Idea of The World, or the Neoliberal Idea of The World, and so forth. Paradoxically, all these competing structures are themselves part of a larger structure, at least the total structure of human thought, and probably something quite a bit smaller. All of these ideas are probably rooted in, are merely branches of, Euro/American exceptionalism, say.

My contribution, I have decided, is to write books and take pictures. My goal is simply to add, in another medium, to that large intellectual structure which is the rough set of ideas I roughly agree with. The idea of capitalism controlled, contained. The idea that people's sexuality is perhaps not the government's business. The idea that skin color might be irrelevant to anything except how to light a portrait. Hence, my little book on San Francisco, and perhaps other similar little booklets in future.

My goal is not to provide the seminal work that changes everything, the prime mover, the ur-cause. There will be no such thing, in the first place, and in the second place that title will be granted after the fact more or less at random by those who write the histories. The work is done bit by bit, with a little book here, a picture there, a poem over here, a stirring graduation speech from that podium. I just want to do a bit here, a bit there. My books are a symptom as well as a support.

Victory isn't really a possibility in play here. There will be battles and wars, people will die, people will be broken to poverty and raised up to vast wealth, but the edifice of human thought, of human culture, these Ideas of Who We Are, these merely evolve and change, never dying, never holding quite still. One general theme is ascendant, and then another. I merely want to nudge my pet notions upwards for the nonce.

Still, let us hope that the good guys win!