Note the discussion below regarding the missing photographs. I have reason to believe, but am unable to confirm, that John Penner filed a DMCA takedown notice against my use of his picture here. I filed a counter-claim, but have yet to receive notification of legal action from John. I assume that he's dropped the matter. At this point it would be reasonable and proper for me to re-instate the pictures I used.

I will note further that as part of filing his claim, John had to check a box under "Sworn Statements" next to this text: I have a good faith belief that use of the copyrighted materials described above as allegedly infringing is not authorized by the copyright owner, its agent, or the law. Note the last phrase.

So, yes, John probably made a sworn statement to the effect that he had a "good faith belief" that the use of the copyrighted materials were not authorized "by the law", that is, that my usage here was not a valid Fair Use. Since I had informed him that I felt that my use was a case of Fair Use, he had the opportunity to do a little research. Whether he elected to do so, I cannot say.

In any case, there are grounds upon which I could pursue John for wilfully making a spurious claim here. Either he is profoundly ignorant of copyright law, a real possibility, or he understands Fair Use and chose to make a sworn statement that he knew to be false in order to harass me. Either way, he could be subject to the full force of the law. Given that it would cost me money and time, and that the odds of collecting are essentially nil given that John resides in another country, I have elected to let it lie.

The pictures will not return because, to be blunt, I cannot be effed to look them up again, and nobody's likely to read this post again. Go look at John's web site for the full horror, if you must, o rare and gentle reader of my back catalog.

People say that photographs preserve memories. It's a trite marketing pitch. It reminds me of the curious little exchanges that occur when someone dies, let's say, skydiving. Someone will say "at least he died doing something he loved" and then some wag, usually me, will express surprise that he loved slamming into the ground at 120 miles per hour.

When you go get your photograph taken, you're not actually there to preserve a memory. The memory would be of being photographed, after all which is generally not what is depicted, and generally not the memory we're looking for. At least not with formal portraiture.

Here's a picture from John, who lives in Sooke, BC (which isn't quite as remote as it sounds, it's just around the corner from the provincial capital, which I must admit, is kind of remote).

Picture removed per DMCA takedown notice filed by John Penner, the photographer in question. I have filed a counterclaim on the grounds that my usage here is clearly Fair Use as a transformative commentary, in the meantime you may admire John's pictures at John's Photography. At any rate, I think it's John Penner based on evidence I have in hand.


Now, John is a professional with 30 years of experience, and he helps out on one of the more dysfunctional internet forums I know of, but he can stick lights into places, and achieve accurate focus. This picture makes my teeth itch. I hate this sort of crap so very very hard. Not only it is wildly dated and weirdly framed, the guy in the picture is just doing his Camera Face, with his mouth hanging dopily open. There's no precious memory here, there's just a horrible picture, and probably a sort of tedious afternoon. I dare say the customer is perfectly happy, basically because it's "clear" and it looks like him.

The picture surely pleases him, he's got all his stuff in the frame there and whatnot. The specific memory it evokes is tedious, but the general associations are probably pretty positive.

It occurred to me a little later that the takedown notice is in fact unclear what the notice was about. It is possible that the other photographer, whose photograph I used under the same fair use criteria here, was in fact the filer. In order to comply with google's ToS to the best of my ability, I am removing all material to which I am making the fair use claim from this post, pending the results of my counter-claims. These photos can be found at James Tang Photography.


Again, we have the artifice of a "photo session" in play here. Most likely the couple has dressed up specially for this photo shoot, most likely the photographer is directing/posing (you can take courses on how to pose Happy Couples so that they Look Happy). Still, it is at least taken at that time of life, when the whole relationship genuinely does have that flavor, the freshness and excitement of the recent engagement. While the couple is in truth playacting for the camera, they're at least playacting a scene they believe in.

Again, the customers are without a doubt delighted. They've got, probably, exactly the pictures they had in mind.

They went out that day to help make these pictures, they worked at it, and here they are. The salient memory is of work, of standing in a field trying to hear the photographer's instructions while also trying to look beautiful and feeling a little weird and itchy wearing these clothes out in the middle of a field. The work, however, was successful. Why in God's name you'd want these pictures is a bit of a mystery, but they are a thing people seem to genuinely want.

Anyways, it is much the same deal. The specific memories evoked are likely tedious and not very comfortable, but the general sensation, the idea behind the pictures, is pleasing. At least for the moment.

I do these things with kids from time to time, with some moderate success, and never for money. So, I, too, am guilty here. The pictures made are quite nice, and record the appearance of the child, and even a flash of personality on good days. The process is awkward, not fully pleasant. The specific memories associated with the pictures, probably not wonderful, but the general era evoked is, well, it is whatever it is, no?

Twenty years from now, I dare say the memories of the "photo session" will be vague, but perhaps the memories of that time in the relevant lives will pop back in to focus when the subjects gaze upon the pictures? That's certainly how it works for me. Pictures of me as a kid evoke no recollection at all of being photographed, but to be fair often very little to no recollection of that time of my life either. A few later pictures evoke the time, without evoking the photographer.

Anything resembling a formal portrait, though, evokes memories of itchiness, discomfort, a generally weird sensation. We didn't do much formal portraiture.

What about a successful proper portrait session, as opposed to some low rent retail shop?

Ideally, this is going to land someplace a little further in the territory of an actual pleasant memory. Here's a guy I know, a stained glass artist I did a little fluffy interview with for our neighborhood "newspaper": 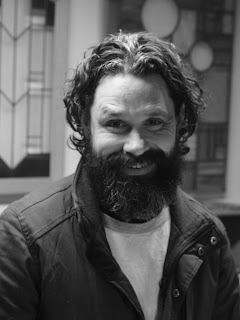 What's Erin's memory of this experience? I don't know, but I will hazard that it was a little sensation of being "on the spot" a little "arg, there's a guy taking pictures" but also a memory of a mildly pleasant conversation about his work. Erin was working as I shot, I have a bunch of pictures of his hands, his work, and so on. This is just a moment when he felt the camera come up, and so "posed" for just an instant, gave me a bit of a camera-ready-grin, and then went back to work.

We didn't go to a place where photography is done, I went to his place where stained glass is done. And then I made him a bit uncomfortable, certainly. But surely not as awkward as the fellow in the uniform up at the top. And it certainly wasn't as big or intrusive a production. The result, I am biased enough to say, is about a billion times better even though the lighting is a bit iffy and, to be honest, the focus is not in the right spot at all. Kirk Tuck would have hit the technicals much better, and most likely done at least as well on the "moment of genuine personality."

Next up we have candids, or near-candids. These girls are just hanging about enjoying a sunny day. Only one of them even sees me, she said to her friends "he's taking a picture!" immediately after this, to get them to look up and smile. I took that picture too, but it wasn't as good. 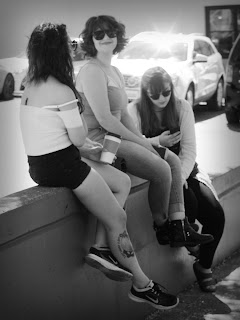 The memory here would probably be of waiting around with girlfriends on a glorious sunny day for, well, whatever they were waiting for. I hope they were having a good time, and I like to imagine that the guy with the camera was a bare ripple on their day.

Anyways, the point is, assuming I have one, that the "memories" associated with a photo are kind of all over the place. There's memories associated with the actual taking of the picture, but also then memories of that era of life, of whatever the picture was intended to capture and preserve. It's complicated.