The Difficulty with Straight Photography

When someone paints Aphrodite, they probably get themselves a model and have her strip down, and then the paint a picture of her, and then they lard the painting up with all sorts of clues, a bunch of symbolic objects so that the educated will know that the girl in the picture is Aphrodite. The point here is that the picture is a picture of Aphrodite. The model was just a reference to be sure the painter didn't have to keep muttering "face, boobs, navel, THEN knees" to himself over and over.

Photography trying the same game has trouble because there's the model right there in the picture. It's harder to get around her to Aphrodite. Pictorialists had a bunch of ideas (a bunch of different ideas, notably, it's not just "make it all blurry") to help out with this, but in the end the Art Establishment decreed that none of these ideas really worked, and that photography really had to get back to admitting that the model is, after all, the model, and there she is.

And so we have straight photography which is, like it or not, the dominant form of photography today. Certainly there are people painting all over their photos and making collages and whatnot, but they're constantly being glared at by everyone else. If you want to be recognized, unambiguously, as a photographer without any caveats or asterisks you pretty much need to be shooting fairly straight. And that really just means that the picture is first and foremost about what was in front of the lens.

The model is present.

Virtually all photography done today just stops there. Large swathes of serious photographers have no ambition beyond rendering a pleasing account of what is in front of the lens. Billions of phone owners just snap their friends, their cars, their lunches for no reason but to show these items to other people, the purest form of representation maybe.

I am on the record as a snob, as a seeker of something more. Not to denigrate the straight representations of things, I like those too. But I believe that more is possible, and that more is what interests me.

So, what is the more? I will use, rather loosely, the word allegory. In a painting of Aphrodite, we see a kind of an allegory for the goddess of myth. The painting isn't her, but the idea of her is mashed into it someplace. When Weston rattles on about "seeing plus" what he means is that his green pepper is somehow more than a green pepper. When Cartier-Bresson goes on about the "decisive moment" he means that moment when the scene in front of him is not merely a bunch of kids playing in the street, but becomes something more.

Straight photography, being as it were "subject forward" is a bit strapped when it comes to what this notional allegory is an allegory of. Now comes perhaps the dumbest-sounding thing I have ever said, in a lifetime of saying dumb shit:

The photographer's job, therefore, is to find the moment, the point of view, in which the stuff in front of the lens manifests itself as, in some sense, an allegory of itself.

Straight photography doesn't really permit allegories of anything else because if you do that you're basically just a dirty pictorialist. At the same time Art demands an allegory, so there you are kind of boxed into a corner. You're stuck with the thing as an allegory of itself.

Anyways, poncy as it sounds, I think it's a useful handle (for me, anyways) to grab hold of when I'm trying to make something out of something.

You can use it too! 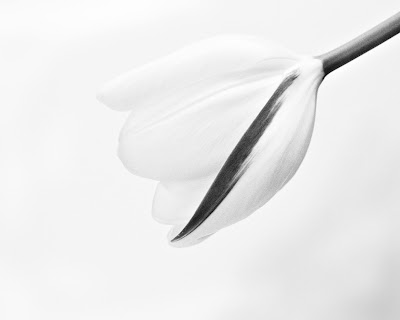 Tulip as an allegory for Tulip.
Also, apparently I cannot stop taking
this fucking picture. 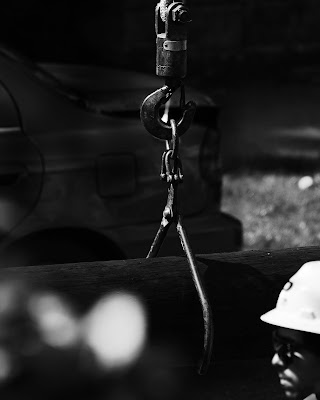 The allegory of the lineman