Mike, over on ToP, took a few lines to express his irritation with A.D. Coleman's work to discredit the official story of Robert Capa's D-Day photos.

You know, the story were Capa was on the first amphib to land or at least in the first wave, ran around for hours shooting roll after roll of hard-hitting journalism before rushing back to England to hit the deadline, only to have almost all the negative ruined in a darkroom accident, leaving only a few artistically damaged negatives that were barely salvageable? That story is crap. Among other things it turns out that the people in charge of Operation Overlord wanted, for some incomprehensible reason, to focus on putting guys with guns onto the beach in the first few waves rather than guys with cameras.

Anyways, whatever, you can read up on it elsewhere if you like. Mike makes the point that, whatever the true story, Capa managed to make "one of the iconic images of the entire Second World War and one of the most famous war images in the history of photography," to be specific, this photo: 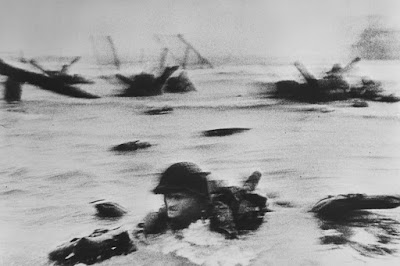 which, you know, ain't wrong. It is iconic, we all know it.

Here is another photo from the same day, shot by Robert Sargent: 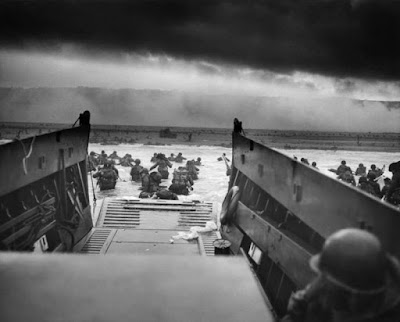 which is, well, it's not iconic, is it? At least, I have no memory of ever having seen it today. It was one of the first pictures that popped up when I was looking for D-Day photo not taken by Robert Capa. You may well recall it, and it has apparently been widely reproduced, but it does not have the status of Capa's picture.

Sargent's picture is also a very strong image. It's quite different from Capa's picture. It is frankly far more photojournalistic, it carries far more "story" than Capa's picture, but much less emotional grunt as well. But it's graphical, it's strong, and it's a very minor photograph in the canon.

Well. One reason is that Capa had much better PR. He had a great story, and he was shooting for a major magazine. Sargent was just some jerk in the Coast Guard, shooting for the Coast Guard. Is there more to it than that? I dunno, but I kind of don't think so. A object becomes iconic through the slow and intricate workings of vast cultural machinery. Is the photo great because it's a Capa, or is Capa great because he made good photos? Yes. And also, yes.

I don't intend to argue A.D. Coleman's case here, that has been done to death in other venues, much more thoroughly than we would do it here.

But I do want to raise the ideas around how a picture becomes iconic. It's not just because it's a really good picture.