I promised you, a little while ago, some discussion of a commentator who took the opposite tack. Colin Pantall is writing a series of essays on ethics in photography in which he considers photographs almost completely in terms of the politics of their making, and almost not at all on their own merits, on the contents of the frame.

Colin is some sort of a British academic, but I find my own ideas and conceits echoed in his writing fairly often. You may deduce from this that he is intelligent, erudite, and devilishly handsome. The essay series I'm talking about here is a year-long project, started in January, for World Press Photo's Witness thing, which I guess is something like an electronic magazine. He's got 7 essays up now, plus an intro, which works out to about 1 a month, so I dare say we'll see a few more.

You can start with the intro here, and move on. There is a somewhat haphazard and often incomplete collection of links to later essays at the end of each one. With a bit of poking around you should be able to get to all of them, in sequence.

They're pretty good. As I started in on them, it fairly quickly occurred to me that he never seemed to be approaching any kind of conclusion, there's no big reveal, and so far there's no attempt at some masterful synthesis of all we have learned. Not too long after that I decided that what he was up to (so far) is not intended as a big think piece, but as a survey. A survey taken from a specific point of view, namely the methods and motivations various documentary photographic projects.

In each essay, Colin tells us about some things, usually photographic things, and he sketches the politics that drove the making of those things. Gently, he issues judgments of those methods. It feels sometimes as though he's going to go all woke and irritating on us, but happily he sticks to bigger issues like "racism is bad" which, you know, a pretty broad spectrum of us can get behind, right? His judgments tend to fall along the lines of how closely the politics of the project hew to his own (and to mine), but what he is striving for with fair success is to judge based on how full, how rounded, how humanist the methods and motivations are.

Allow me to step back and re-cast some things I've been writing about more carefully and succinctly.

When you look at a photo, you bring a bunch of baggage with you, including politics. No photo has its politics, its meaning, written in its pixels, it's just a bunch of dots. But sometimes you bring enough material to the table to read the politics of a photo easily (or at least to imagine that you do.) The things depicted in the frame may, or may not, provide markers you can use to connect the contents of the frame to your knowledge. Some frames are ciphers to all but the innest of the in-crowd, those with special knowledge. Others reveal some clues to the ordinarily knowledgeable. Some frames contain no markers whatsoever, you simply have to be told.

You don't need to know much to read some of Eddie Adams' photo of Brigadier General Nguyen Ngoc Loan executing Nguyen Van Lem. A few of the basic facts of the US war in Vietnam will do. You likely recognize the military garb frame-left, and recognize that this takes place in war. It is not a gangland murder. A specialist might identify which war. But, no degree of examination of the frame will reveal the names of the people in it, their ranks, or the details of the killing. These things you have to be told.

Walker Evans' photos of the Tengle family are more opaque unless you happen to be familiar with the contents of Let Us Now Praise Famous Men. The photos acquire new depth when, for example, you learn that James Agee disliked the Tengles. That the photographer, Evans, likes them is evident to anyone who knows a little about photography, merely by examining the frame. You might still guess poverty, rural, and maybe America based on the contents of the frame. Who the Tengles are, and how they came to be photographed, these are facts which matter, and also facts which you cannot find inside the frame.

Sally Mann's photographs of battlefields mean nothing whatsoever unless you have some notion of the US Civil War, there is literally nothing to see except a field. Even this, you need to know what a field is, what grass is, what trees are. No clues in the frame will lead one to Antietam or Cold Harbor, no matter what depth of Civil War knowledge you possess. Once that connection is made for you, though, a much unfolds with great force and speed.

Colin is interested in the background information. He wants to understand the politics of the photograph, in terms of its intended meaning whether that be writ in the frame, or only known outside the frame. He wants to know how and why photos were made, and by whom, and for what purpose. He wants, above all, to know the connections between the intended meanings and the ways in which the photos were made.

He judges the work based, at least for the purposes of his essays, on those exact grounds. I asked, and he was explicit: you can't see it in the pictures. Or at any rate, not always.

Of course, he is interested here in the ethics of making and using pictures, this is the entire point of his series. But still, he is willing to pass judgement in this limited but not particularly narrow domain, based entirely on the politics which surround the picture rather than the contents of the frame. The results are worth our consideration. This material is real, it is important, and we should not ignore it.

While it is not (always) visible in the pictures themselves, it surrounds the work. In order to understand the work, and to assign it meaning, we should understand something of the way the picture was made.

As with Mike Johnston's approach, I think this approach is incomplete, inadequate. It suffices for Colin's purpose here, but as complete critical apparatus, it is not enough. Probably Colin would agree, he is after all intelligent, erudite, and devilishly handsome.

One of the projects that stuck out to me, in Colin's series, is a collection of photographs stitched together from Google's freely available satellite imagery, of cattle feedlots in the USA. One need bring only common knowledge to the table to read this to a reasonable extent. Cattle are packed together in mind-bogglingly large operations. Vast lakes of.. something, one can reasonably assume cow shit, are adjacent. The whole thing looks apocalyptic to even an ordinary person, with ordinary knowledge. 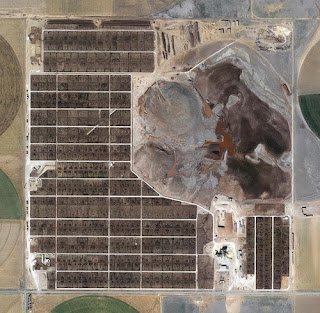 Learning that these creatures are cows, and deducing that we eat the results, is uncomfortable. Whether one could work that out by examining the frame, using only common understanding, I am unsure. It's on the edge. Some people will, some won't. Perhaps you have to have some slight understanding of feedlots to work that out.

Further investigation would reveal that, bizarrely, the USA has laws prohibiting photography of such operations. It follows trivially that the artist, Mishka Henner, is working around those laws to show us what those laws conceal — a distinctly political act. At that moment the politics of the situation, again, unfold with great speed and force.

This next photograph could be a Nike Ad for all we know. It contains no markers whatever of its politics. 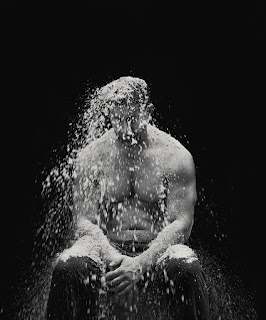 If not an advert, this could easily be what I termed Serious Decor, an appealing and ultimately purely formal exercise in visual construction.

It happens that it is not that at all. It is a densely coded photograph, made by Hoda Afshar, of a man, Emad, who was at that time (and may still be) residing in a refugee camp. It is as densely coded as a prince's portrait. The elements all mean something, but the meanings need to be told. You cannot deduce them from the frame.

Absent the decoder ring, it's a perfectly nice picture, even an excellent and powerful one. But it is like many others. It could be an advertisement. With the decoder ring, much unfolds, with great force and speed.

To pretend that Art exists only as itself, merely as the contents of the frame, the thing on the pedestal, the sequence of notes, is absurd.