I spend an unhealthy amount of time fuming about things other people write about photography.

The thing that bothers me the most, I think, is that people who style themselves experts tend to offer what are, in the end, personal takes on photographs as this were the objective truth of the thing. There's nothing wrong with a personal take, and often I agree with the personal take in broad strokes. My personal take is largely aligned with that one, and so forth.

The trouble arises from the presentation of a personal take as universal, as the "correct" take. All other readings merely illustrate that you're dumb, a Nazi, or both.

It occurs to me that what we're seeing is actually an inability to separate two things. 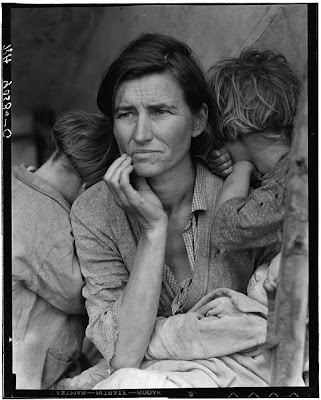 Florence Thompson was thinking something in this picture. She had a specific mood. Her children likewise. She had an opinion, however minimal, about Dorothea Lange who was photographing her. These are well-defined ideas, and nobody doubts that there is a single correct answer to many questions like "how did Thompson feel about being photographed?"

This single correct answer, while clearly a thing we can point to, is in fact unknowable. While it is incontrovertible that Thompson had in this moment a pretty specific idea, there is no way to know what it was. It is gone, irrevocably, with a billion trillion other trivial details of the universe.

Secondly, there is the meaning we make of those photo. We form an idea, maybe, about what Thompson thought about being photographed. Our idea of her idea is meaning we make, it is not ground truth at all. The meaning we make is not a single thing, your idea and mine my be different. Your idea might change over time, or if you learn a new ancillary fact.

These two things are only very slightly related. Our guesses about the ground truth inform the meaning we make, so there is a tenuous thread linking the two, but we must not conflate the two.

I think many critics of photography do just that. I don't think John Edwin Mason, or Jörg Colberg, or Michael Shaw, or any of these people have it really really clear that these two are separate, and largely unrelated. The result is that they're not quite clear whether they're looking for a singular thing, or a thing with multiple aspects. They sort of blunder into a singular version of the thing that is knowable, namely their own reading of the picture.

This is wrong. The knowable thing is multiple. The singular thing is unknowable. They're separate.

You can certainly explore the singular thing, you can investigate the ground truth of the frame to your heart's content, and with diligence and effort you can often uncover some truly interesting material. That material may well color your personal reading of the photo, and you might share that information to see if it colors other people's readings.

Neverthless, personal readings are multiple, and personal. The forensic reading is the singular one, and it's impersonal.

Don't be muddling them up now.