I'm going to meander through some ideas here. As usual, built on ideas about photographs of the sort I like, of the sort that I think are essentially photographic in some sense. A photograph can be anything you like, of course. My preferred form is photography, specifically, as an analogue of seeing, as nearly a kind of seeing.

Let us return to Berger's conception of Realism (after Lukács) in which an artwork is an example of Realism when it, by a kind of synecdoche, indicates a totality, a whole world or reality, by detailed exposition of a part, a fragment. The day in the man's life, carefully described, reveals something of the man's total life.

Naturalism, also per Berger, is relegated to merely an intense degree of hyper-detail, perhaps drawn from life. Realism thus construed may or may not be Naturalistic.

Photographs are by their nature Naturalistic, and when they are working well I contend that they exemplify Realism in this sense.

We see this kind of idea popping up here and there. Edward Weston's search for the essence of the thing, Barthes' invocation of eidolon with respect to photography, are at least related ideas. Somehow the photograph distills (or ought to distill) something essential from the subject, and by that process, stand in for the totality (Barthes again: "blind field.")

At the same time, though, we have strong undercurrents of both Impressionism and Expressionism which crop up.

Late Victorian photographers cribbed directly from Impressionist painters and explicitly made photographs that were philosophically Impressionistic. They were supposed to leave upon the viewer the "impression" of the subject, to strike the viewer in a certain way. A little later Stieglitz makes his Equivalents which are pretty explicitly Expressionism: they are to express the emotional state of the photographer. They are to transfer to the viewer not the input, the impression, but rather the emotional result, the expression.

Ansel Adams goes on and on about how photographs should, ultimately, be the expression of the photographer's response to the scene. This is, again, bare-faced Expressionism.

As an aside, that Weston and Adams are lumped together strikes me increasingly as wildly absurd. Adams is philosophically Expressionist, but his pictures are powered by pure Romanticism. If you added a model in a diaphanous white dress with fairy wings to almost any of his photos, she'd fit right in. Which is why many of his modern admirers in fact hire models, and own fairy wings. A model in wings will dress up any waterfall photo. Weston, on the other hand, had no truck with such shit. His pictures are as Romantic as nail. Weston and Adams get lumped together only because they espoused similar technical methods, which is insane.

Photographs partake, inherently, in Bergerian Realism. The create a kind of presence. This leads, inevitably, to an Impression. You are there, but not really. You're filling the world around the photo, in a kind of blurry memory-like fashion. Whatever the photograph actually looks like, it acts in a way that combines Realism with Impressionism.

You could probably argue that any Bergerian Realism acts this way, and maybe you'd be right. I myself am not sure. Does a literary realism, in which a detailed account of a man's day stands in for his life, work as if mediated through an impression? I am not sure. The photo, though, I am confident about. What you make of the photo, inside your own head, is the fuzzy painting that somehow encompasses all water lilies in all ponds on all warm days. At least when the photograph is working well.

When we look at Florence Thompson in Lange's photo, we form an impression of the pea picker's camp, an impression of Thompson's life. We can't actually see any of it, we have no knowledge of the details. How many cars are parked in the camp, and what license plate numbers do they have? Where was Thompson's last stop? Where was her next stop? We don't know any of these things, but we feel the weight of her life anyway, we feel something we imagine is the tenor of the pea picker's camp.

Realism and Impressionism are the first two pieces of the trifecta.

The last is Expressionism, the expression of the artist's feelings (or at least the viewer's sense of what the artist might have been feeling).

This is absolutely a tough nut to crack. It's no accident that it crops up as The Thing some photographer is trying to do. The first two bits kind of happen by themselves if you put in a bit of effort and have a bit of luck. The raw naturalism of the photograph powers those things — it looks so real, it just kind of does those things.

Now, do I simply mean the artist's intention? I don't think so, not really. I don't mean that the photograph becomes a sort of memo from the photographer explaining their emotions. 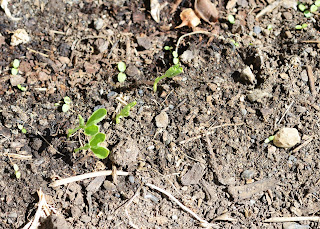 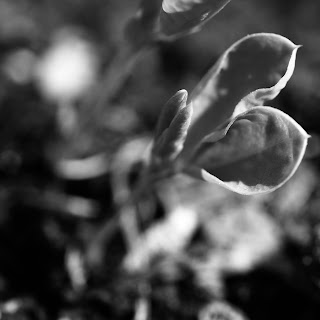 Both photographs, of the same subject and taken perhaps a minute apart, function as photographs. They do, however, create different impressions. The first, I argue, impresses upon one the notion of a sort of unkempt bed of earth, perhaps in a mildly unkempt garden, with, uh, some sort of stuff growing. The second, I argue, impresses upon one rather more the violent upthrust of new life. Both are perfectly true.

The second one more closely expresses my emotional response to these crummy little sprouts in my crummy unkempt garden. At the same time, though, it is far less an example of realism and the impression it gives is not really accurate. The garden as a totality vanishes, at best it expresses maybe some totality of the existence of a sweet pea vine. It fails, to my mind, because it sacrifices too much. We see, maybe, the pea vine, as a kind of abstraction, separated from its environment, separated from the world. It floats in our imagination (at best) surrounded by nothing.

A successful photograph, to my mind, balances these things out.

The photograph ought to express a totality, it ought to invite the viewer into the frame to invent something fairly coherent and complete. The world of the photograph should resemble the real world, not an isolated thing, not a falsehood, neither a too-narrow tranche of the universe, nor yet a too-broad; it should resemble a right-sized world, a world suited to contain and give meaning to the subject. The pea, outside of the garden, loses something of its meaning. At the same time, we need not keep the Andromeda galaxy in mind here. The galaxy ought to be elided, but the garden perhaps ought not to be.

The expression should live and breathe in harmony with the impression, and the realism. That sensation of the violent thrust of life should be well-felt, grounded on that real world of the unkempt earth, of the real albeit messy garden in which it lives.

All in balance, to create a kind of emotional reality, a depth of feeling and corresponding response.