I gave this thing a pretty bad review, earlier, which review I stand by 100%. Perhaps even more firmly, now. My complaint, essentially, is that the book presents itself as a documentary piece, an essentially truthful work, when it seems very likely that it is rather more a construct than you'd think.

This is not, though, to say that it's badly made. The design is a little wonky to my eye, but it is most definitely designed. The book is well-made, the paper is this super thick plastic-y shit that feels sort of luxurious, etc. The narrative, the visual structure, is also very effective and let's think about that some.

If I were to simply describe the photos to you in order, detailing the contents of each frame but avoiding mention of the photographic methods, you might well think it was a book about female exhibitionists. The dominant theme is women, usually modestly attractive, with their breasts exposed, mostly in locations that seem to be inappropriate (alleys, usually, but sometimes kitchens and so on.) The point is always, her breasts are showing, for no particular reason.

The second most notable theme is probably Americana/religious symbols. Is a neon cross Americana, or a religious symbol? There's not a lot of eagles, flags, crosses, but there's enough to catch the eye, and it's incongruous enough to stand out. You might decide it's about Bible Belt exhibitionists, and feel a little frisson of scolding-the-hypocrites.

Despite this, it's clearly not a book about female exhibitionists. It presents itself, and it succeeds as, a book fundamentally about the down-and-out, the drug users, the hookers, the dregs of society. Given that it's literally just a book of very ordinary looking women with their tits out, this feels rather strange.

D'Allant uses a mass of gimmickry to accomplish this. His lighting makes heavy use of car headlights (or simulations,) most of his photos are tilted, or out of focus, or motion blurred, or all of the above. Guns and dogs appear repeatedly, although they do not dominate as a theme, and it's always the same dogs and the same gun (singular) with the same perfectly ordinary looking naked girl somewhere in the frame. (This struck me as particularly lame and is emblematic of the project — you could only find one gun in Tulsa, OK? You couldn't find a single person to smoke a crack pipe or shoot up, in Tulsa, OK? D'Allant was definitely not trying very hard here.)

There are a lot of shots out of car windows, to give some sort of feeling of dynamism, I guess.

The whole thing works. It feels very grindhouse. While there is literally more sex than drug use, one is left with the impression of a bunch of junkies. It turns out that if you take grainy black and white photos of a naked girl posing in an alley, lit by headlights, and talk about drugs and desperation on the facing page, you'll create a pretty brisk impression that the girl is a junkie. I feel like this says something.

I can't put my finger on it exactly, but it feels specifically cinematic. These feel like characters and scenes from movies, and by making these citations D'Allant is able to create a convincing impression while showing us virtually nothing. This doesn't make me any happier about the book, if anything it makes me angrier. He is telling, rather than showing, he's using tics and citations and gimmickry, to say nothing of text messages that I strongly suspect he wrote himself, to create a story which is simply not present in the pictures. This is the opposite of photography.

It's just girls with their tits out, lost in a sea of bullshit.

One more item, as a kind of addendum, a detail from one of the photos: 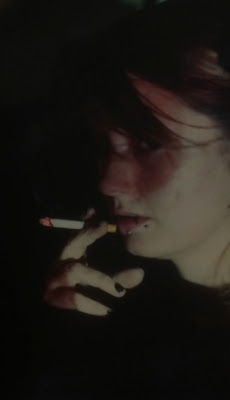 Fun fact, a cigarette doesn't glow like that unless you're actively dragging on it. Just sayin'.