Here's a photo by Danny Lyon, from his series/book "Conversations with the Dead" 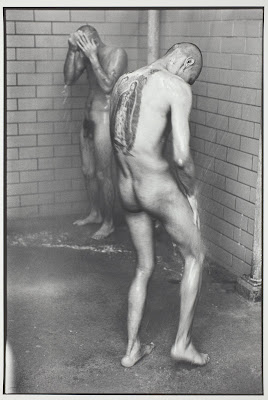 Dr. John Edwin Mason asked about the ethics of this photo, what public purpose it might serve. One does not, as a rule, take Dr. Mason's questions very seriously here, he is a man who possesses all the answers. His goal is to tacitly assert his wisdom and, if he rouses himself, to "educate" some people through the dialectic of scolding. Nevertheless, let us look at this photo, because I like it, and because it is new to me.

It's by Danny Lyon, first of all, of the outlaw motorcyclists and whatnot. I'm not particularly familiar with his work, he's just a guy I've heard of. His method was to embed pretty deeply, and to photograph that in which he was then embedded. According to his bio, he spent some time behind bars involuntarily, and was given for this project remarkably broad access to the Texas carceral system.

Naturally, he claims that he was friend with all the prisoners and they backed his every move etcetera etcetera, the usual things one says (and perhaps even believes) when one is doing this sort of thing. It might even be true. Anyways, this is very much a modern approach, and is exactly what Dr. Mason and his cronies say all photo projects should be like. You can research the project yourself if you like but there seems to have legitimately been a lot of inclusion of the subjects in the work.

Lyon positions himself as a semi-insider, translating the insider world-view for us outsiders.

This is done in the late 1960s, despite the modern methods.

Ok, let's actually look at this thing, though.

As a graphical object, it's very much worthy of hanging on a wall (though I'd prefer more aggressive dark tones) but obviously the subject matter makes that a little dicey.

Onwards to the subject matter.

It's a couple of dudes showering in a very institutional communal shower. This could be the local YMCA, but it's more likely something else. The men have very very short hair, consistent with the military or the carceral system. Possibly some sort of medical facility. In these modern times, tattoos have become meaningless, but if we guess that this photo is older, the tattoos suggest that the subjects are not upper-middle-class.

It feels like a prison photo, and indeed it is.

The Madonna on the near guy's back is a sort of poignant visual joke, and is probably why Lyon shot this, or at least why this photo makes the cut.

The men themselves are not particularly posing themselves in any graceful way; one simply stands there fore-square washing his skull, and the near fellow works away at, well, something. Nevertheless, there is a real grace to the arrangement of their bodies, which creates a pleasing contrast. The plash of water, the motion blur of bodies, and the out-of-focus whatever-it-is lower left lend a powerful sense of vérité here.

It feels very real, it creates a strong sense of presence. You can practically feel the water, probably too cold; and smell the soap, probably unpleasantly medicinal.

This is, of course, the point. Lyon wants to create for you, the outsider, an accurate re-creation of the feeling of prison. He wants you to smell the soap, and freeze in the water. He's made a visually appealing picture that, ideally, appeals to you with its graphical strength and finishes you off with a visceral journey to the showers.

Dr. Mason asks about the ethics of shooting this.

I don't know what his actual point is, and he's the sort of fellow who sits back looking smug in preference to explaining, so we're kind of on our own here.

Probably he's noting that these men, the subjects, did not in any practical sense have a choice about being photographed in the nude. This is a real thing. The very best you can hope for is that they felt only a little coercion, and it's perfectly possible there's a guard just out of frame telling them he'll shoot them if they don't behave. I dunno.

I am inclined to take Lyon at least to a degree at his word, and assume that to some degree he's gained the trust of his subjects. Certainly these dudes don't seem to give a fuck that he's there, and Lyon is clearly very close indeed. But still, coercion is present here.

Not everyone thinks there is a legitimate calculus of whether or not coercion can be "worth it" if the value of the pictures is sufficiently high. I find these kinds of calculations a little dicey myself, but nevertheless there is little doubt that Lyon was aiming pretty high here. He was trying for high social value, revealing the truth of the system, of the existence behind bars.

He succeeds, here. It is not, to my eye, a stretch to suggest that this photograph reveals in a visceral and powerful way the humiliating lack of privacy that is inherent in every aspect of a carceral system. As these things go, there is pretty high social value here. Yes, there are probably people for whom this is highly stimulating pornography, there are people for whom this is "triggering" either literally or in the sense of inducing a long rant on social media. For the most of us, though, this is a kind of pseudo-experience which incrementally enhances our understanding of the lives of prisoners. This picture, mostly, enlarges the viewer to some moderate degree.

If that is not the social value of a photograph I am at a complete loss as to what else it might be.

Still, if you don't believe that you can "justify" coercion with social value, well, then this picture fails. You can't photograph in prisons at all, and that's that. Which is certainly a position, but also would tend to render the carceral system even more opaque to those of us who have thus far avoided being its guests.

You could probably also argue that the tattoo renders the man in the picture identifiable, and that outing him in this fashion is wicked and wrong. This would be a stupid argument, since a man's incarceration is a matter of public record already.

In general I cannot shake the idea that, however humiliating and unpleasant having some dude with a camera photographing you, it's a triviality when stacked up next to being incarcerated. I don't think these guys gave a shit. I think these guys had larger worries. This doesn't make robbing a guy who's already got cancer ok, of course. But it tends to shape the victim's perception, and to the extent that matters, it matters.

If I was Michael Shaw of "Reading the Pictures" I would probably find a Shoah reference here ("showers!") and somehow work in the Madonna, and honestly it's probably not completely insane to do that.  Whether Lyon put that in there, some people will probably take it out. You could probably work in some references to Renaissance Painting if you worked at it a bit, and so on.

I think Lyon was just taking pictures of dudes showering, and picked out the best one. And I think it's a good one, and I think it serves his purpose.

A pretty sturdy argument can be made, and I think I made it, for fairly high social value in this photo. Whether or not that justifies whatever degree of coercion you guess at is essentially a personal question.