FSA Photo of the Week

I've decided to mix up the format a little and move all my commentary down after the photograph, so you can enjoy it for a little while as-is. 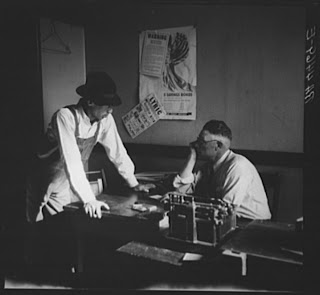 Note the repeated shapes in the hangar and the hat. The balanced composition of the two men with the posters and flyers on the wall behind is nice, although the typewriter arguably throws things off a little. It's a nice textural element for the foreground, but I'm not sure it's helping the image overall.

The arrangement of posters/flyers on the wall is magnificent, and the content on them is pretty nice too -- buy bonds, WARNING, and some sort of LYRIC advertisement. The one hanging by its corner is too good to be true. This is the kind of collection of "accidents" of geometry that we dream of.

What makes it go is, though, the interaction between the two men. It's clearly intense, but whether it's antagonistic or not, we cannot tell. Is the seated man tired, bored, or both? Why does the man with the hat still have his hat on? The contrasting body language speaks volumes, but it's all in a foreign language so we can't quite read it.