I've wrestled for years with the question of photography, what's it all about anyways. I think I have a little bit if the key here.

There are many uses for photographs. Here are four.

1. An extension of seeing. Sharing my lunch on social media. A picture of Susie making a funny face at the party. Susie is so great! These go on facebook.

2. Ritualistic recording of moments of life. School photos. Wedding photos. Baby pictures. God help us all, senior sessions. These go on the wall.

3. Photos for photographers. Ming Thein. Eric Kim. A closed self referential world of its own. Nobody buys these things, these are click-bait on flickr. Photographers +like these things for one another, largely on the basis of how much money was (allegedly) spent to make them. 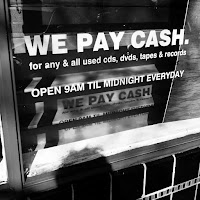 4. Art. Photos with ideas. Nobody buys these things, except from a few artists. They don't go with the couch. Frequently, they go in books which are occasionally purchased.

These are not buckets into which pictures are strictly categorized. These are really just points of view. We might take pictures, look at pictures, or share pictures, or judge pictures, from one or another of them.

Retail photographers selling wedding packages tend to judge photos based on how they stack up as retail photos. Your average snapshot is terrible as a ritualistic record of life. So is an Art photo of the same thing. Therefore, the retail photographer will reason, they are bad. The Artist will look at the retail wedding photos and judge them as bad. Bad Art. Both Artist and Wedding Pro are, in a sense, right. And both are wildly wrong.

If I'm looking at a picture on facebook of Susie acting ridiculous at a party, I might think "ha ha that Susie is so great!" and then some killjoy leans over my shoulder and says "you know, that's not a very good picture". The correct answer at this point is "it's also not a pizza, who the fuck cares?" followed, if necessary, by punching the killjoy quite hard.

The observation that the lighting is unflattering in the picture of Susie is utterly irrelevant. That's not the point of the picture. Nobody except people who are judging the picture from the wrong point of view cares.

At least part of the trouble is that we're coming from the world of other 2D art, painting and so on. We tend to look at all paintings more or less the same way, as Fine Art or attempts at same. Nobody makes watercolors of weddings, nobody shares watercolors on facebook from the office party. Watercolors are always aimed at "something appealing you might want to hang on your wall and look at from time to time".

This is not some sort of cultural relativism bullshit, either. I am not claiming that snapshots are just as legitimate as Pro Quality Images while secretly thinking they're not. This isn't "well, cannibals, it's just a thing they do".

There are no moral standards in play here, all there is is opinion. It's all in your point of view. Nobody's getting eaten here.