Let me preface this by saying that in truth I have no opinion about the building I am illustrating here. Let me also apologize for the lens, I had no idea this zoom lens was so completely broken. I rarely use it, and apparently it's been dropped one too many times. I used it because it is the lens I own with the longest zoom range. The horrible effects are irrelevant, however.

Here is a random building somewhere downtown in Bellingham. This is, more or less, the picture I would expect the average Internet Famous Photographer to produce. It says I can see visually interesting objects, perform perspective corrections, and execute a set of vaguely idiosyncratic post-processing steps to produce a sort of signature look.

(in this case, large radius unsharp mask, desaturate blues, push up the reds, then pull all colors down to taste, then sharpen some) 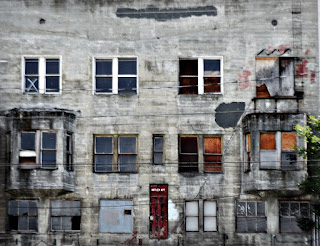 It also says, probably, I have no particular ideas about this building, it just caught my eye.

Here are some possible opinions and ideas. 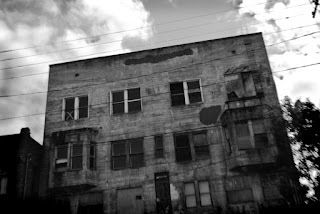 In fact, it looms alarmingly: 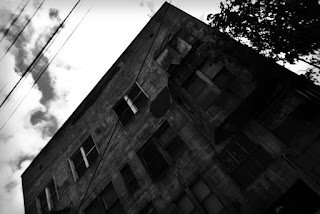 No, actually it does not loom. It is merely decrepit: 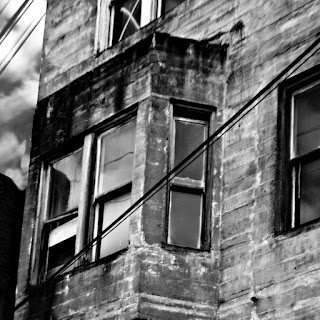 It is a lonely object of pity:

You might disagree with these readings, that is OK. The point is that these are radically different readings of the same structure, shot minutes apart (while I was holding a latte in one hand, mind you). These are the sorts of things I might imagine, or even shoot, as I struggled to devise an idea of how to photograph this thing. If I gave a single goddamned wit about this building, I would go back, over and over, and refine my ideas, and try to devise a way to build an essay or a part of an essay.

These various readings would provide a starting point. I might say no, no, no or I might say kinda like that one but from the other side and then a bunch of details like those or whatever.