Take a look at this picture: 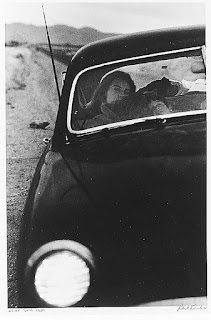 I can't think of a single rule of composition that this thing doesn't violate. Rule of Thirds? Dynamic Symmetry? Golden Anything? Clean Edges? Don't lead the eye out of the frame? Subject isolation? Point of highest contrast "draws the eye"? Level the horizon? Everything. Try your own favorites out to see if this thing passes them. I'm not even sure he's got the focus on his subjects.

Why does it work? Because of the things in it. The people we find after a moment and inspect are wonderfully interesting and sympathetic. We find them without any trouble, we don't need leading lines. The bright headlight which, in amateur critique parlance would no doubt "totally kill it" is in fact a total non-issue in terms of finding the subject, and is vital to the life of the frame. The junk around the edge of the frame doesn't matter, because we find the people instantly, and everything else is less important.

It's a terrific photo, which nails a certain time and place, and a feeling. That sensation of being pulled over out in the middle of noplace, USA, is distinctive and instantly recognizable. Because Frank got the right things into the frame, "composition" be damned. (To be fair, and to toot my own horn a little, I think one could argue that Ruskin might find some things to approve of, but he wasn't really a "rules" guy and he also sort of actually knew a few things.)

Next time you see some maroon going on about some sort of rule or method of composition, pull this one out and see what you think.