As noted earlier, I found myself interested in why I so disliked this guy's photos. After a lot of noodling, I am prepared to offer an explanation and maybe a little insight into composition's role in photography.

First, let's throw one of the photos up for another look: 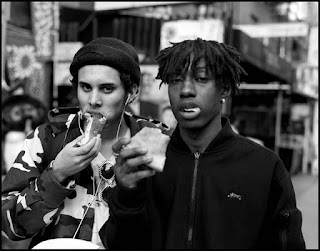 There's a standard trick one can do with a picture, which is to squint at it until the whole thing is blurry in your vision. Then look for the most visually dominant part, the brightest patch or the point of highest contrast. This probably simulates the first few milliseconds of looking at a picture, before your visual system resolves any details.

Conventional wisdom says to place that point of most arresting visual business on the subject. See pretty much any Rembrandt painting for a blunt-force example.

Pendragon's pictures almost without exception have that point of visual interest somewhere in the out-of-focus background.

Is Rembrandt's trick just a trope we expect, or something basic to the operation of the visual cortext? Don't know, don't care. The point is that, used in the traditional way, it telegraphs the artist's intention. Pendragon is defying that, and telegraphing conflicting information. The subject(s), in focus, front and center are the obvious point of interest, but the most visually arresting point is not there, it's somewhere behind them.

Further, as previously noted, Pendragon resolutely insists on tonally blending his subjects into the background, while simultaneously separating them from the background with his focus/depth-of-field. Another conflict in his telegraphed intentions. Returning again to Rembrandt we can see that the dutchman often failed to separate his subjects from the backgrounds -- it's not a requirement that one do so. What Rembrandt did do, though, was make clear that he did not give one single shit about that separation. He telegraphed his intentions with crystal clarity.

What we have is ambiguous, chaotic, visual intention. How, then, shall we move up the ladder to the artistic intent? Is Pendragon making a statement about something chaotic, or ambiguous, or conflicting? Is there something about the wild visual panoply that is New York City in here? This might be a great way to start. Unfortunately, I'm not seeing it. There's nothing in the subject matter to support that idea. The subject matter appears to be very ordinary "street portraits" of the interesting characters you'll find a-plenty in any moderately sized urban environment.

I am forced to conclude that either Pendragon is almost certainly just incompetent. Perhaps he's adopted this weird mess of conflicting visuals in a vague attempt at a "signature style" but it's just a mess. I suspect that he has no artistic intent at all, beyond "film is cool".

Either way, I don't this his pictures work very well.

So what does all this say about composition as an activity, as something one ought to do in a picture?

Well, let us once again dismiss all that "eye leading" crap. Composition is not for helping the viewer figure out what's in the picture.

The purpose of composition is, perhaps, not to help us to read the picture but the artist.