As always, here I am waffling. Just when I decide that composition simply doesn't matter a whit, content is the only thing that does, Chris Gampat and his crew of merry incompetents digs up Rachmael Pendragon, a NYC photographer who runs around with a large format camera taking pictures of attention seekers. Here are a couple of samples, notable for reasons I will get into in a moment: 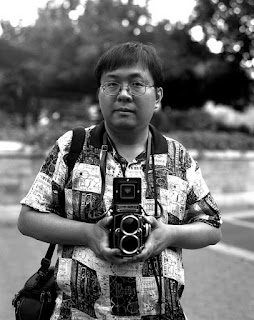 There's more. Punk rockers and the like. Rachmael seems to want to be a sort of low-rent Arbus. More work here: Rachmael Pendragon.

Here's the thing that really bugs me about Rachmael's pictures: He has no concept of tonally separating his subjects from the backgrounds. In one of the pictures above he even places the black guy against a black background and simultaneously finds a light background for the white guy and, incredibly, a dark background for the white guy's dark hat. The only "proper" tonal separation here is the black guy's hair against a light background. This failure to separate is so frequent that he might be doing it on purpose. It's haphazard enough to make me wonder, though.

I used to say things that "composition helps to clarify the picture for the viewer" without explaining why or how, because that's what everyone does. There's some sort of vague BS about leading the eye around the frame and whatnot. That's rubbish. In Rachmael's pictures, in particular, we find the human faces instantly (duh) and look at them. Not only are the faces, the people, front and center, but our optical system is literally a face-finding machine. We don't actually need the tonal separation to know what's important. Rachmael's mis-composition is not leaving us unable to figure out his pictures. I don't even think it's making it more difficult.

And yet, and yet.

Obviously I have prejudices. If Chris Gampat's crew have picked out someone for mention, my assumption is that they're pretty bad. Anyone who affects a large format camera and a made-up-name (actually several made-up-names, "Sironar de Bergerac" haw haw haw among them) and takes pictures of attention whores can't be any good, right?

I am trying to dig through these prejudices and see if the pictures still bug me. If they do, I would very much like to know why they bug me.