In an earlier posting, I wrote out some stuff on my work in progress, working title Bellingham Summer showing some ideas for the introductory material. That has evolved, a little, and I think I have a handle on it.

Next up is the core of the book, 20 or so pictures that, I think, nail down something of the essence of what I see as Summer in Bellingham, up here on the 49th parallel, where the days are very long in summer, and very short in winter (the British, of course, are very familiar with this, as are the northern Europeans -- I understand that the approved coping mechanism in winter is to Drink and Complain, both of which I feel fairly adept with).

After due consideration and winnowing down, I found that I have no special needs in this central section. There was no particular reason for pacing, recapitulation, anything fancy. It's just a group of pictures. So, the goal of sequencing here became simply to make it look structured, organized. I spent some time categorizing things, and rediscovered the specific list of things that I had first identified as representing Summer in Bellingham: 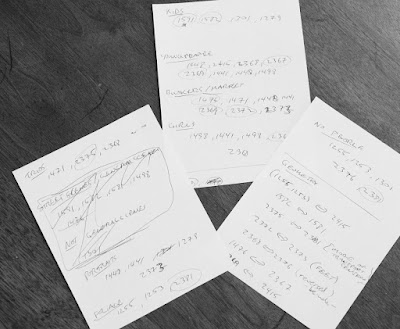 I looked for geometrical coincidences, and without really looking for it, I found one pretty decent visual joke. Well. Let's be honest, visual jokes are, at best, about as good as a lousy pun, but this one's that good.

I also worked up a look, one that I have used in the past, roughly. Essentially, high contrast, firm blacks, and a heavy vignette. The intent here is a hallucinatory, dreamlike, flavor. Which is indeed what I am going for, I see summer here as a slightly crazed and altogether too brief experience. We're all sleep deprived from the light, and frantic to get in enough Summering to carry us through the chilly, wet, cloudy winter. Summer here is glorious, it's sunny, it's warm without being too hot. The area is beautiful, filled with natural wonder and rushing water. There's a lot to get done in the few months of summer. And the days are very very long indeed at the height of it. 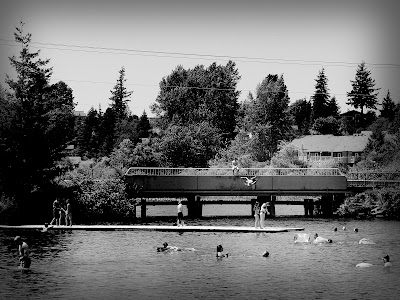 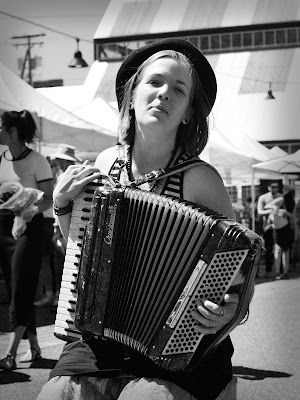 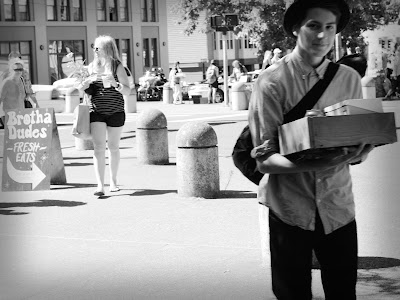 I didn't kill myself over structure. The aim was purely to avoid jarring juxtapositions as far as possible (keep the Kids a few pages removed from the Topless March) and to exploit whatever relationships seemed obvious to impose a sort of order. Here are some spreads.

This is the joke, the second spread immediately follows the first: 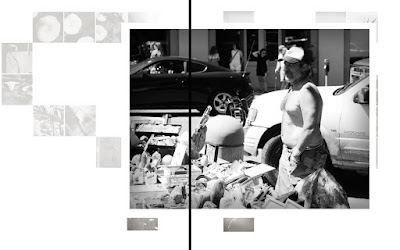 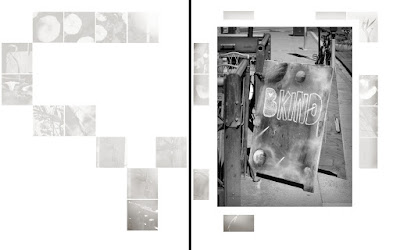 The central content of the book opens with the Wisteria, as I suggested in the first post of this series, to connect with the foliage theme of the intro. The next spread, though, is this kid-themed spread. (note foliage recto to provide some loose link to that Wisteria): 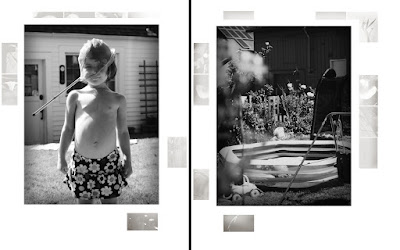 We move on through another page or two of kid-related material, and after a while end up here. This is essentially a geometrical relationship, although there's also a "boys vs. girls" thing, and the people are all college aged, more or less: The coda is still giving me a little trouble. I have boiled it down to two pictures of a lawnmower, but they frankly look stupid sitting there in a sea of white. I've toned them slightly, to separate them from the main content, and I have an idea for recapitulating the growth pattern behind the main content in a more organic way, to imply fall, to carry the main body of the book into the coda while still indicating a clear change of mood and idea, and then the close.

I have one last picture on the end, a flashback of sorts, printed very faint, which I visualize verso opposite the end paper.

Once I have the coda worked out, I will post a third and final set of remarks, and most likely a link to the finished book so you can buy it yourself! Assuming, of course, that the wheels do not fall off.