Revisit parts I and parts II if you like.

Charging in to the coda. I had this motif of a lawnmower, this sort of trashed instance of one of those old hand-powered reel mowers that the neighbors a couple doors down use to occasionally whack at their lawn, more or less in futility. I had a bunch of photos of this thing, and it seemed to fit with a sort of ending idea, so I grabbed two of them, toned them a bit purplish and dark, and tried them out.

The first iteration was basically this: 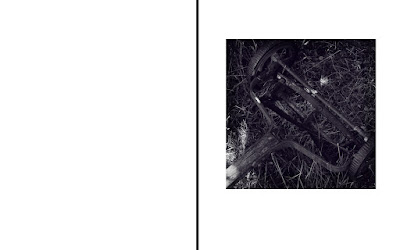 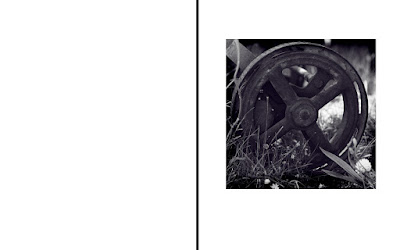 Bluntly, this sucks. The idea is that the blank pages show that matrix of morning glory picturelets having gone away entirely, but it's too white, too much blank space after the more visually/design rich central part of the book. The pictures are simply not strong enough to carry a blank page.

I tried the pictures facing one another, I tried a blank spread to separate things. The bottom line was that there needed to be more visual complexity on the page, the previous pages with the background of morning glory material was simply too much to drop suddenly. I could revisit that, or I could invent a way to make the coda similarly rich/complex.

Back to the drawing board. I conceived the idea, after a while, of recapitulating the growth of the morning glory in a more organic, fall-themed way. This time the small elements would be "blown" off the side of the page.

Happily, fall is more or less here, so I was able to collect a bunch of yellowed leaves and suchlike and I photographed the on white, compositing them together to make three spreads, like this (imagine these as full bleed, blogspot is going to stick a white border around them, but the leaves will go to the page-edge): 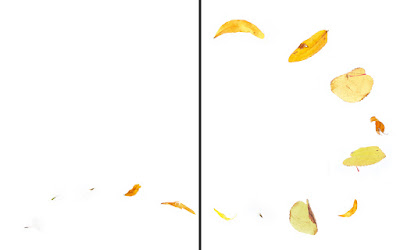 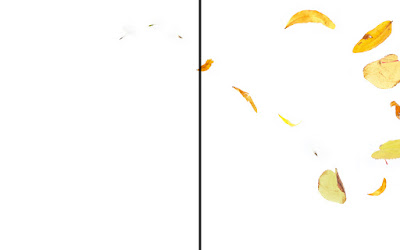 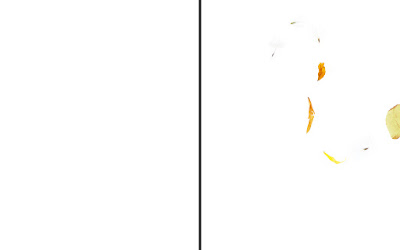 My original thought was to desaturate these, to make them read as very dully colored, but I forgot, and when I popped the full color pictures into the book I liked it. So there's this strange splash of color at the back. Finally, I placed the mower pictures on there, and wrapped up with my last photo. The final four spreads looking like this: 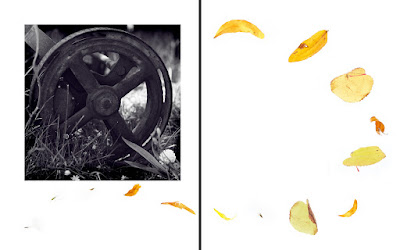 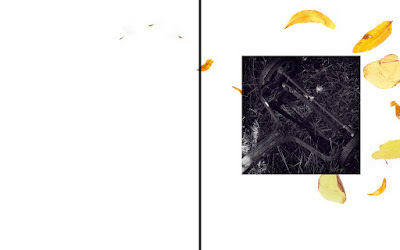 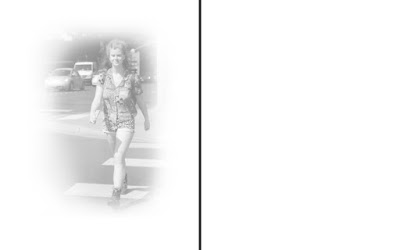 The last shot was a horrible screwup, a marvelous grab shot of a young woman with whom I have a "I think I recognize you" mutual relationship based on buying coffee here and there. She saw me photographing her and smiled cheerfully, but I botched the focus. She's so very very Bellingham, though, that I wanted to find a place for her, and here it is.