I've done a fair number of "trade books" on blurb, with mainly black and white photography. They're cheap as anything. I have successfully learned two (2) things.

The first is to be aware that pictures (especially masses of black) will tend to show through, especially with the bargain paper. Be a little cognizant of that, and consider your layouts appropriately.

The second is that the blacks are weak and it can be a bit disappointing if you do black and white with large masses of blacks.. It's not like they're grey or anything, but they're weak. So, first of all, make sure you have beefy blacks. If you "crush the blacks" as they say, starting from slightly open and airy looking darker tones, you're going to get a greyish mist instead of a photograph.

In order to get a picture that reads more or less normally, I push the very darkest tones down, and lift the darker greys (the ones right above the darkest ones) up a little to shove some contrast down into the darker areas, and then I tack everything else in place. This is all in a curves adjustment tool of your choice, and it looks a bit like this: 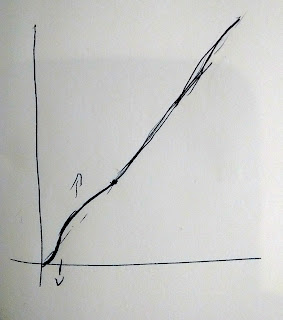 The result will look terrible on screen, with plugged up shadows and whatnot. Don't you worry, those are gonna open right back up. The result reads pretty well to me in the final print. The blacks, while weak, still read OK. There's nothing to be done about the narrow tonal range available, but you can fool the eye as it were, to a degree.

If you print "straight" you will wind up with a bit of that "crushed blacks" look, with the slightly "open" darkest tones. Which might be what you're looking for. If you're a weirdo.

Why "crushed" blacks means "lightened" I do not know, but there it is.