Recently on PetaPixel we have seen a young photographer name of Caleb Stein, an "emerging" photographer as they say, featured with a bunch of pictures. This sort of thing: 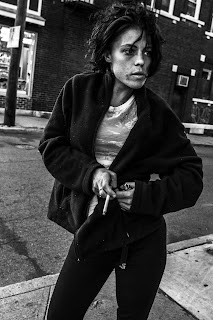 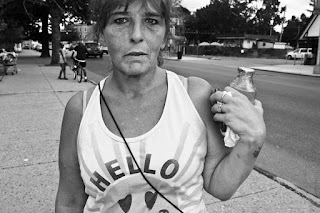 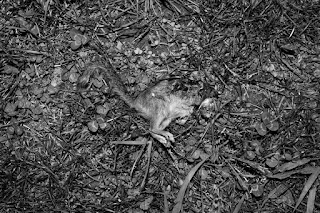 which is instantly recognizable as "kid with a camera documents poverty gonna change the world" and which, upon further inspection, turns out to be exactly what it appears to be. There are all the usual tropes. This kid thinks he's Diane Arbus, but has a handful of other tropes he's picked up here or there that he churns out. So what, it's just PetaPixel. He's got a web site of sorts, and there's some other pictures on it, none of which struck me as much better. It's the homeless-people project that's getting traction, though.

What's interesting about this kid is that he's "published" in at least three magazines besides PetaPixel: Huck, Burn, and Trip. At least two of those have print editions, as well as the web site, although who knows if Caleb's work will get printed. I eagerly await his publication in more four letter magazines, perhaps FUCK, tUrn, and pOOp. Caleb has also been nominated, shortlisted, and runnered up in various competitions.

It is inconceivable to me that anyone publishing this photo essay does not instantly recognize it as the uninteresting lightweight fluff that it is. Which begs the question of why they'd publish it, eh?

All this on the basis of, basically, nothing. The internet is utterly festooned with this sort of thing. This lad has trotted out to the section of Poughkeepsie where the junkies and homeless hang out, he's persuaded a handful of them to pose for him. Then he wraps this up in a little turgid prose about Poughkeepsie's poverty level (I live in a town that's poorer, and it looks nothing like this, although the homeless people look just like that). There's no structure, this is just a collection of "the best ones" in the sense of Likes, one assumes.

These pictures have been done so many times that they're just symbols, standing in for the photographer's politics. They don't even, in any meaningful way, connect us to poverty, to homelessness, to any sort of social problem any more. They tell us, in short and simple strokes, what kind of photographer we're looking at.

He's pretending that he's documenting Poughkeepsie's poverty, but he's not. He's documenting, mostly, a very small handful of addicts and people he thought looked weird enough to be worth his time. The 19% of Poughkeepsie that lives below the poverty line look, almost universally, like regular people, perhaps a little shabbier, in cheaper clothes. More tired looking. A little hunted.

Caleb's got some bog standard "street" shots, there are 10s of thousands of similar "projects" out there on the web, some better, some worse, mostly just about the same. He's parleying this into a career! Good for him, but how on earth does that work?

I smell a powerful mentor, money, or both.