Phase One: The Camera for Photographers who don't give a shit about Photography

So Phase One, for those of you who don't follow the press on these matters, introduced a new camera back series for their XF system, which peaks out at 150 megapixels. It also has their super amazing new Trichomatic color science, and a bunch of other bullshit.

No photographer has a need for this. The number of professionals standing around saying "gosh, I sure could use like three times as many pixels, slightly better color science, and a hell of a lot less depth of field" is very very close to zero, if not actually zero. We have reached the point where the specifications on this thing are well past what anyone can actually use for, well, for anything. This thing is a device you use to take pictures which show off the capabilities of the device. It is the exact equivalent of the $50,000 turntable with a 500 pound marble platter that really needs 30 minutes to spin up to a stable speed.

But then, my god, the completely imaginary acoustic properties really spring to life!

I could explain in detail why none of the specs are anything that anyone, yes even a professional, would care about, but that would be boring and any readers that care can work it out themselves, I expect.

This thing isn't a camera, it's a fucking confession:

Octogenarian Trump-Voter: Bless me, Padre,
for I don't give a shit about photography.
Priest: Say 10 Hail Marys and pay me $60,000


While we have the hood up on this hot mess, let's take a look at the thing: 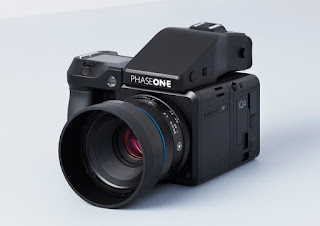 Look, if I'm paying north of 50 grand for something purely to stroke my ego, I don't think it's out of line to insist that it either have tits or a discernible design language. This thing appears to have been drawn from a design brief thus:

A metaphor for amnesia. A box intended to hold only unfiltered Baltic air tinged with grief. A child's toy.


It's vaguely modernist. Sort of Bauhaus, but stupid. Call it Bauhuh? The result looks like an industrial robot for middle management.

I assume that they're basically just copying the RB/RZ cameras from Mamiya, which is where they started. Those were built as boxy-but-cheaper Hasselblad alternatives. They were priced for the budget conscious professional who wanted an excellent medium format studio camera, but didn't want to pay the Hasselblad tax. And was willing to hit the gym, buff up a bit, to carry the fucker around. There wasn't supposed to be much of a design language. And I swear my RZ67 still looks like a Ferrari next to these atrocities from Phase One.

They seem to be doing OK, though. Octogenarian Trump Voters have more money than brains, and some of them are OK with ugly-ass boxes as long as they have enough specs. I assume the name of the game is to have more expensive kit than the asshole next to you on your next Antarctic Photo Cruise, so all that matters is that it say IQ4 on yours while his just says IQ3 like some god damned peasant camera.

It's only a matter of time before you'll be able to buy them in pairs, one to shoot with, the other to smash to pieces on the deck of the ship. Maybe camera smashes could become a thing. And then we'll all make hot toddies with 300 year old scotch using pokers heated in the flames of a pile of $100 bills. Because, why the hell not?