Take a look at this picture. It's probably familiar to you: 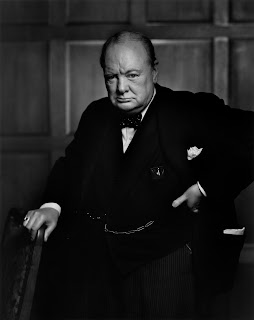 What do you see? A fat man. Balding. He appears to be irritated. You see a waistcoat (or a vest?), a watch chain, a bow tie. These, the paneled background, as well as the texture and style of the photograph speak to you of the social class of the man (high). There's not much else here. There are some white objects on the right side of the frame that look like pocket silks and so on, but it's not at all clear what they are. Does the body extend that far over?

It is, of course, Winston Churchill, and you will almost certainly have recognized him. He is, famously, irritated because the photographer, Karsh, has just taken his cigar.

Because it is Churchill, we read his glower as power and/or arrogance barely contained.

It is chic these days to declare Churchill a villain, a racist, any number of things. In previous decades it was chic to declare him a hero. At this historical moment he has a sort of double life, as either one or the other depending on the speaker, depending on the moment. Churchill, without a doubt, presided over and made important decisions during, events that were awful and events that were heroic.

Depending on where you land politically, therefore, you are almost certain to look at this picture and think either bully or hero.

Neither, of course, is really true. We judge our political leaders, our celebrities, and people we see in photographs, by absurdly simple standards. Our sensorium is a marvelous system for reducing the infinitely complex world around us to a few manageable approximations which we can use to find food, shelter, and conduct a sort of crude society. Similarly, we reduce people, notably people we see in pictures to a few simple tropes.

Are you describable in a single word? Are you merely a bully or a good fellow or smart or silly? You are not.

The point is that we reduce pictures, especially pictures of people, absurdly. The complex gestalt that is a human being, represented in vastly simplified (but still complex) form on a piece of paper, on a screen, we reduce further to a single word or phrase. Or, in these degenerate times, the glyph +1.

I view this as a sort of collapsing of state. We take in the picture, with its myriad details which speak to us, which suggest, this or that, and we combine that with our own experience, our own prejudices and opinions, and we collapse the the whole thing to a short pithy reaction: Bully.

Of course we can choose to spend more time with a picture and get more out of it, but mostly people do not. If you're striving to connect, using a picture, you've kind of got one shot at it.

It is tempting to, and people do it all the time, to suggest that everyone will collapse a picture to a different pithy reaction, because "it's all subjective." This is wrong. For starters, there simply are not that many pithy reactions available, we have to share. Secondly, many fewer reactions will get widely deployed than even that because people are pretty similar to one another.

The picture of Nancy Pelosi clapping at Donald Trump will tend to collapse to one of a short list of reactions, depending on whether you recognize the players and if you do where you sit on the political spectrum. Similarly the Burning Man Girl photograph will collapse in a handful of different ways, depending on your sexual preferences and a handful of other details about you.

It is this collapsing, this reduction, that we need to understand if we wish to reach people. We need, I think, to understand far more nuance and detail of our pictures (or anyone's pictures.) If we understand the details, if we see the cues and hints clearly, we can more reliably speculate about how this person or that person will tend to collapse the picture to a glib reaction.

The common refrain, when people fail to react in the right way, is simply that these viewers are "uneducated." The usual discussion goes something like this:

A photographer shows off some weird portrait which anyone can see that a normal viewer will "collapse" in a particular way. The photographer may or may not complain that people don't like the picture. Other photographers will coo about the hair light or some goddamned thing, and will explain that the viewers are just uneducated, and do not see the awesomeness of the hair light.

The photographers are collapsing the picture to a glib description: lighting is great!

Non-photographers are collapsing the picture to a different glib description: subject looks like he's farting.

As photographers, we need to do better than that. We need to see the bow tie, the waistcoat, the girl's rings, the hair light, and the expression on the subject's face, all at once. We need to understand the significance of each of these details, and make a decent guess at how this viewer or that will read them. From that follows how this viewer or that will collapse the picture to a simple understanding. I could probably go on about semiotics at length here, if I knew anything about semiotics.

This is completely different from what internet forums do, from what Reading The Pictures does, and from what the vast majority of self-styled commentators do. These people all choose to give us their collapsed take on the picture, and maybe unpick a little where that take came from.

They've got snake by the wrong end entirely. I don't care what Michael Shaw's hot take on some political picture is, because I already know what it is. I can predict, with depressing ease, how he is going to collapse any picture he sees. What I am interested in is what the details are in the picture that carry various meanings are, and how they might collapse this way, or that way, how various people will see the photo.

What details do you see in there, and what kinds of meaning do you think they carry? How would that affect the way a viewer might read the picture?