Through the Eyes of Others

Camera Lucida is, essentially, one man's investigation into how he, personally, reacts to photographs. I've been noodling on how people seem to mainly be interested in offering their own, personal, hot takes on pictures. We see it in forums "well to me this picture..." and we see it in Serious Academic places like Reading The Pictures where Michael Shaw offers essentially the same thing. We see it on twitter, where people share photographs with the assumption that You (all of you) will react in precisely the same way the tweeter did.

As a self-styled critic and would-be propagandist, I spend a lot of time speculating, contrariwise, about what other people might see in a picture.

Consider this one, that made the rounds recently. 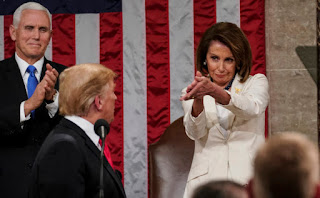 This is Nancy Pelosi, who is politically the leader of the Democratic Party, clapping for Donald Trump's speech. I have no way of knowing Pelosi's heart, or even if she has one, but she certainly appears to be essentially sneering at him in this photograph.

This has been widely re-tweeted and so on, with a side-helping of "hurr, hurr, lookit Nancy dunking on Donald! yay!" by leftist twitter, and by Reading The Pictures, and every other leftie member of the would-be Academy.

I imagine there are a few other possible reactions. Certainly the MAGA-hat wearing Trump supporter will see "pinched-faced bitch" and offer up some choice suggestions.

What I see is a pair of wealthy oligarchs who have confused sneering at one another in the halls of government with actual governance.

The Donor Class, who certainly want to be seen as Very Woke because it distracts from the question of "where'd you get all that money" see this as a marvelous bit of theater. Their side is dunking on the bad guys, and twitter loves it! And maybe they love it too!

The question, of course, is what voters see in it. My guess is that the average middle of the road voter who's working 3 jobs and barely making it is going to lean more toward the "two oligarchs who probably both ought to be loaded into a tumbril" reading, although they might be too busy to think much about it.

Here's another visual from the same event: 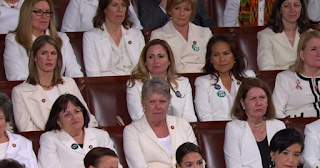 This was another, more explicit, bit of political theater. A large cadre of the female Democrats in congress dressed in white and sat together to listen to Trump's speech, the white referring to the suffragette movement that led to women's voting rights. There is, of course, the same left/right divide in reactions.

What I see, and what I speculate the average voter sees, is a visually powerful reminder that our elected officials are the kind of people who can go out and drop $1000 on a suit of clothes they intend to wear for 2 hours. It is not a secret that we are led, primarily, by the wealthy, and this particular visual does many things other than forcefully remind us of this. I think the suffragettes were great, and that women's voting rights are great. I approve of a nod to same, especially as a kind of rebuke to Trump.

And yet, I look at the sea of white and I am forcefully reminded that these people are not like me. And they are even less like the people in America who are further down the economic ladder than I -- which is to say, most of them.

This is, I think, an essential problem with The Left as construed in the modern west. They tend to view things through a very personal lens, they conflate their own reactions with universal reactions. This is, I think, an intellectual consequence of post-modernism, of structuralism, of these generally pervasive ideas that infest the Academy. Identity Politics in its current form is also a consequence or perhaps merely a relative, as it elevates the personal "lived experience" over all, and in doing so denies the possibility of empathy.

I cannot, and do not presume to, draw a straight line from Derrida to the habit in internet forums of, in the first place offering up only personal reactions, and in the second place slamming people who attempt to offer up more with a loud cry of "Art is all subjective!" There may be no straight line. I rather think there is at any rate a long and crooked one, however. Both belong to the cult of subjectivity, of the dominance of the personal, of the denial of empathy, of the denial of the possibility of understanding across a divide.

From Barthes to the internet forum, we are reduced to the notion that each of us is the ultimate and only authority on ourselves, and completely ignorant outside of that. Smuggled in there is the idea that I am actually a universal authority but that you know only about yourself (for, weirdly, all possible values of I and of you.)

There is in all these ideas a denial of external, objective, truth. The author has no authority, nobody has any authority. We are reduced to cogito, ergo sum and at some point we have managed to drop the first word even of that. If all investigation, research, search for meaning is to be performed by essentially isolated egos, things get pretty damned weird.

Idiots like Michael Shaw, Roland Barthes, Daniel Blight, seem to think that they can only really talk about themselves. They believe in themselves, not only as the only subject they are qualified to talk about, but also themselves as an authoritative model for all right-thinking humans. Their explanation for people who disagree with them is that those people are brainwashed or stupid or, something.

This makes, to be blunt, communication of any meaningful sort impossible. You cannot communicate (and especially you cannot make propaganda) that works if you deny empathy, if you refuse to even attempt to see how others might see a picture, or read an essay, or hear a song lyric. Without empathy, you can communicate only with people who are pretty much like you, and then only by repeating signs which stand in for shared concepts.

From the point of view of the Donor Class and the Political Consultant this is great. Your job becomes simply one of mouthing these signs and either writing or cashing checks, depending on which side you're on. There's plenty of money in a political echo chamber (presumably because the echo chambers without any money captured in them simply fade away) but there's very little good government.

It is worth noting, perhaps, that the Right seems to be less informed by the Academy and their silly po-mo ideas. The Right is also a lot better at propaganda. Weirdly enough, it appears that The Right has not jettisoned empathy at all, but rather embraced it. They're quite good at predicting how people will read a visual, or a slogan, or a song lyric.