Both reviews boil down to a standard round of the Colonialism was Very Bad and things are Still Very Bad dance, but they're built on some assumptions and ideas that I wish to examine in more detail.

First, though, a little brush clearing. Of course the era of European colonialism was bad, duh. It's more complicated, though, than simply reducing the whole era to "white people exploiting brown people because white people suck." I don't want to get in to any kind of defense of colonialism, but it is worth noting that it was more complicated, and that there are in with the wide bands of exploitation and greed also many strands of kindness, wisdom, and both misguided and well-guided attempts to do good.

This complexity is perhaps revealed in echo if we examine for a moment what people like Colberg and Blight actually think. They will tell you, at length, that colonialism was bad because it imposed western ideas on non-western people, in the service of oppressing and exploiting the latter. Which, sure, is true. However, if you ask them about, say, the Saudi habit of chopping people's heads off, about African traditions of female genital mutilation, of the Indian habit of from time to time immolating living wives along with dead husbands, they will decry such cultural practices as terrible and generally suggest that Someone Ought To Do Something about it.

Of course they will justify their rejection of these habits on some sort of higher moral ground, they will insist that their position derives not from a colonialist impulse but from something higher. The higher moral ground they claim is, however, utterly western. There is no firm unassailable basis for these ethical or moral choices, these things are cultural artifacts and nothing more. Colberg, Blight, and their ilk, simply wish to impose their (western) morality on the Saudis, the Africans, the Indians, because in these cases they really super duper disagree with the culture on the ground. And, for the record, I do too. But I don't sit around bitching about colonialism. I recognize my impulse as what it is: a colonialist impulse, an imposition of my western values on other people.

I'm comfortable with that, within limits.

You could argue that these academics are at least not making these claims for the purposes of exploitation, and it's certainly true that Colberg owns no stock in the East India Company. Still, to assert that these moral judgements out of the Academy are not being deployed as part of the eternal effort of the west to bring these lesser nations to heel is to state an absurdity. Of course these practices are brought up by the west to justify actions against the non-west, in order to better exploit the non-west. Don't be silly.

The Academy is running the same old colonialist program as always. They want The Orient to be identical to The West, except with quaint costumes and maybe some cool dances thrown in which we will TOTALLY NOT MAKE HALLOWEEN COSTUMES FROM.

So, having identified Colberg and Blight as neocolonialists, let's set that aside. Their hypocrisy is not directly relevant, but it does set the stage.

Both of the book reviews, or essays, are essentially saying the same things. The claim is that because white people have a certain relationship with the world (true) they see things in a certain way (ok, fair enough) and that these ways of seeing things are reflected in photographs made by white people (I suppose so..) and that therefore the photograph is both highly revelatory of, well, of something, and that the photograph itself in some way takes part in whatever crimes we're ascribing today.

This is a rather long chain of connection, and the last few links are very shaky indeed. If we could pin down precisely what these fellows think the photograph is doing, we could maybe critique it in more specific terms, but they persist in vaguely mumbling about "problematic" rather than actually committing to some sort of coherent position. Still, the general shape of where they stand is clear.

Both authors refer, absurdly, to violent seeing, which is apparently a chic phrase that makes no sense. The purpose of it is to associate, by a sort of sympathetic magic, through repetition, the idea that the photograph itself is a tool of the crime, that it partakes of the crime.

On the observe side of this, we arrive at the desired conclusion, that if only the oppressed people were to take the photographs, the photographs would be somehow different and would be freed of the taint of the crime of colonialism (or whatever -ism is in play).

The desire on the part of both authors, and of the Photographic Academy in general (but also most photographers) is to ascribe to the photograph a power that it simply does not have. As a photographer, or an academic studying photography, of course you want your subject to appear as powerful and important as possible. The endless discussion of which photograph "turned the tide of public opinion" against the Vietnam War is another facet of the same bankrupt discussion.

The conceit is that the photograph of a terrible thing is itself terrible. The photograph is violent, it embodies a violent gaze, it should be shunned? Colberg talks about this picture, for instance: 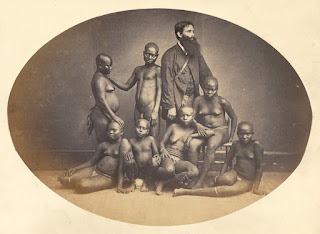 Colberg says that the picture "took his breath away (not in a good way)" that the picture is "very violent" and that "It’s such a ghastly picture, though, that it might take the viewer a while to be able to read the text" all of which are silly remarks. Was Jörg raised in a glass bottle that this kind of picture can strike him down so? As an aside, we again see his western hegemonic attitudes on full display: he imagines this picture to be objectively terrible, but in fact it is only terrible in the context of his own cultural milieu.

Since I share his milieu, I agree that it is a picture of something odious, although the picture certainly isn't violent in any meaningful way, and it certainly did not strike me to the ground unconscious as it, apparently, did to Jörg.

Blight offers a surprisingly similar picture with much the same observations, although he uses his usual mangled pseudo-academic mess to do it: 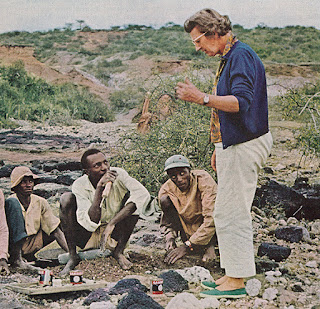 Hilariously, Blight doesn't seem to know that this is Mary Leakey and those guys are working for her sifting the ground looking for the (African) origins of man. While it's still clearly the boss and a group of not-the-boss people, knowing the ground truth here takes away much of the overseer/slaves vibe and makes it feel a lot more likely that the scientist is telling her assistants that lunch will be ready in five minutes.

Blight also gets the poem wrong. The text in the book he's reviewing comes from the original National Geographic magazines, by a process of eliminating most of the words on the page in essentially the same manner at A Humument does. The whole book is, in fact, essentially made by the same means as the various editions of A Humument, photos and text are both cropped to suggest something new. Something a lot less witty, but, whatever.

The conceit is that the thing being photographed is odious, and that therefore the photograph itself is odious or at any rate somehow partakes of the odiousness.

If the notion is that the photograph somehow absorbs the wickedness inherent in the subject, then you'd got a bit of a problem if Leaky is just telling the guys that lunch is ready. There isn't much wickedness to absorb, here.

While both Blight and Colberg appear to be more or less set on this notion, one could as readily take the tack that the ground truth doesn't really matter here. It might well be Mary Leaky inviting her assistants to lunch, but it doesn't look like that. The first picture could be Andamanese Family posing with Strong White Man they have just purchased. The pictures read as a colonialist, white, "gaze." These are photographs which support the idea of white superiority to the brown-skinned majority, regardless of the ground truth.

If you take that point of view, well, fair enough. We know that media works just fine to influence thought. It does make the critique of specific pictures as violent or whatever fairly completely absurd. It's not this picture or that picture that does it. It's the whole mass of them, the whole social mess working, kind of mostly, in the same direction that does it.

The single photo is weak, like a drop of water, precisely because when we examine it we realize at some level that we do not know the ground truth. We don't know if this what it appears to be. It is only by repetition, by the blows of a million, a billion, drops of water against our consciousness that our ideas are eroded and re=shaped.

Colberg, Blight, and all the rest of them insist on, as it were, recoiling in horror before the power of this drop of water or that one, and in the process, they miss the river and, more importantly, the emergent properties that a river has which drops of water do not.

This photo or that photo, while it may or may not be of something odious, which it may or may not read in an odious way, is not particularly interesting. It does not have the power to strike anyone down, or change anyone's mind, or have any substantive social impact. It is the apparatus of media, and the emergent power that the whole has, that does those things. This apparatus has powers which the individual photographs (and other fragments) do not have.

Clutching your pearls while waving faintly at this photograph or that photograph not only makes you look silly, it is to miss the entire point.

It is in the leap from this photograph or that photograph, to the whole apparatus of media in which the power lies, and in which the interesting things occur.