I learned something recently. In the city of Memphis, in the late 1960s, at least, the NAACP (the National Association for the Advancement of Colored People) was on the wrong side of history. Memphis is where Dr. Martin Luther King was assassinated, and in that city (and across much of the USA) the FBI was engaged in trying to subvert the civil rights movement. The reasons vary, depending on who you ask, but nobody thinks it was a particularly shining moment in the history of the FBI.

Anyways. At that time there were any number of groups working in any number of ways to Advance the rights of Colored People, not just the NAACP. The NAACP in fact was run by wealthy and successful black people who felt that the proper approach was evolutionary, legislative, through litigation and not through direct action, and so on. This is not at all surprising, of course, nor it is to say that the NAACP was a bad bunch of people. But they were wrong. They had been, effectively, captured by the status quo, and were effectively, committed to maintaining it.

King and various more radical groups were not, and they did bring direct action, and they did win victories which would have been longer coming (perhaps we would still be waiting) if the slow and evolutionary path of the NAACP and the establishment had won the day.

That much is history.

Somewhere along the way from 1968 to the present, we have developed the idea that change is wrought, or at any can be wrought, by loosely organized groups of people with heartfelt opinions and rhythmic chants. Bellingham loves these things, we have a couple of protest rallies a year, at least, here. This one was pretty typical. 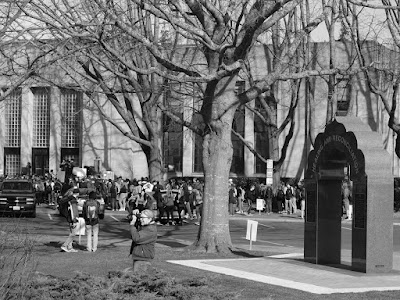 The complete lack of cops was interesting. They were probably around, though.

The attendees were varied. It seemed to be a pretty complete set of nerds, weirdos, normals, popular kids, and so on. I asked, and was informed that the organizers leaned a bit toward the popular in-crowd kids but that a) it wasn't all in-crowd clique shitheads doing it, and b) even the in-crowd kids were getting some respect here. So, while the speakers appeared to be, and indeed were, mainly the cool, rich, popular, kids, they were either doing it for the right reasons, or faking it very well. Sincerity all around. So, that's good. 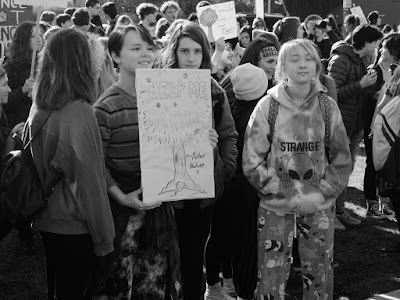 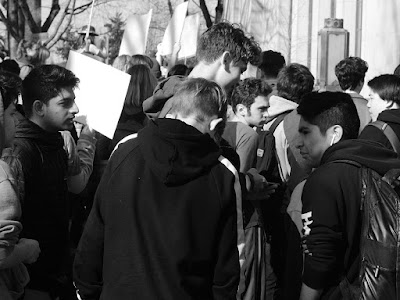 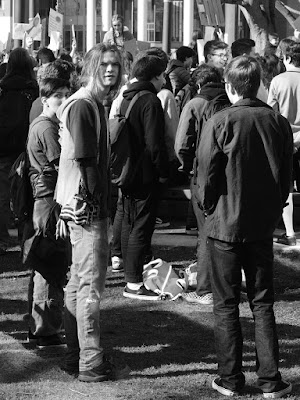 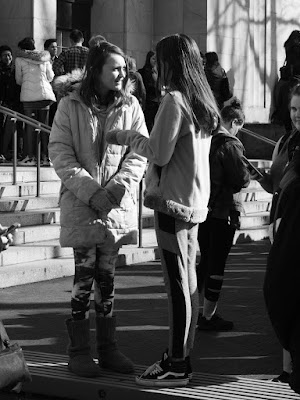 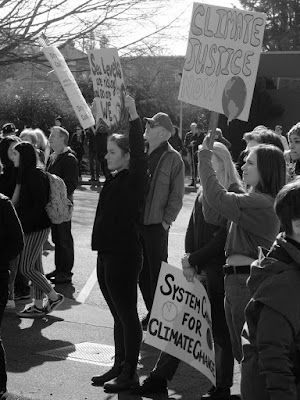 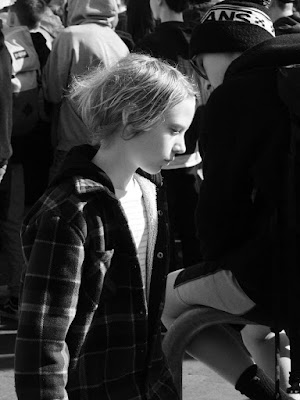 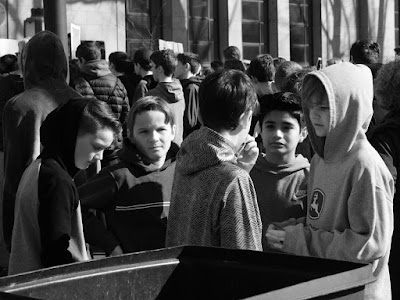 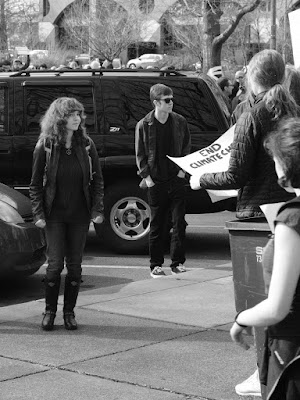 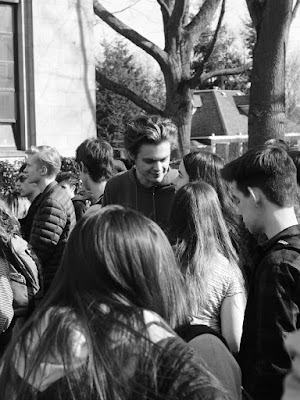 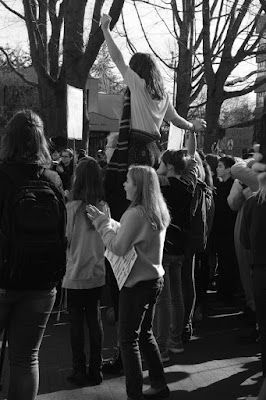 Now, I don't mean to indict these kids. I think it's really great that they're getting out there and doing this (they did a similar thing last year opposing gun violence, another nation-wide thing that some of you may recall, taking place on the heels of some damned school shooting or another).

But. Change does not occur when loosely organized groups of enthusiastic and committed people have rallies and chant, no matter how sincere they are. These things are a mechanism by which enthusiastic people who desperately desire change are induced to expend their energy. Change looks a lot like this from the outside, to be sure, but on the inside the organizations that generate change by these methods are organized with maniacal detail. Everything is planned. There is an overall strategy of a completely military nature. Indeed, it's probably a hell of a lot more coherent, detailed, and sensible than anything a modern army throws together.

These young people, however enthusiastic they are, are not part of any such organization. This is Jaden Stevenson. Articulate, passionate, and checking her phone while other people are making sounds with their food holes. Not all the time, but for a while, and very publicly. Ooops. It doesn't mean anything specific, but it does suggest that there's a lack of discipline. 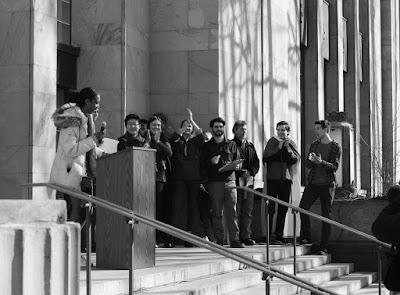 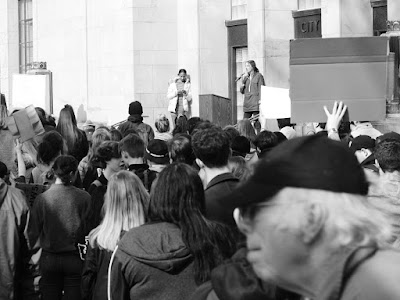 And then there's this guy, another speaker. 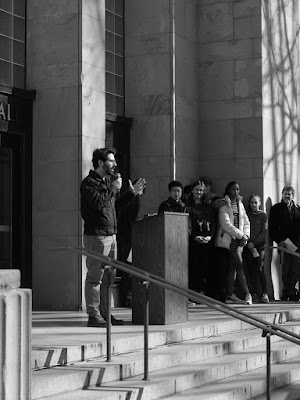 I don't recall his name or which of the myriad local environmental advocacy non-profits he works for. It doesn't matter, those details are irrelevant. He is instantly recognizable as a type. He is a professional non-profit bureaucrat. He's slick, he speaks well, he's very good at having meetings, and he genuinely thinks that having meetings is working for change.

This is a local politician, April Barker, ditto. 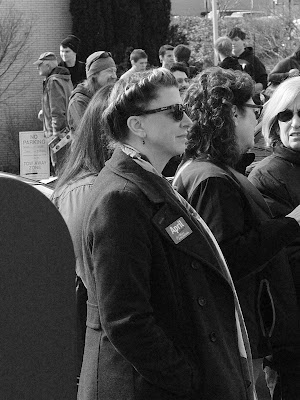 April lurked around the edges smiling and shaking hands and then sloped off at about the half hour mark.

Here are a handful of pictures that don't directly connect to anything, but they are emblematic. 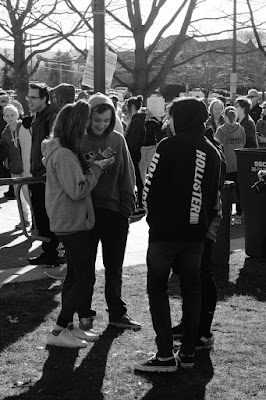 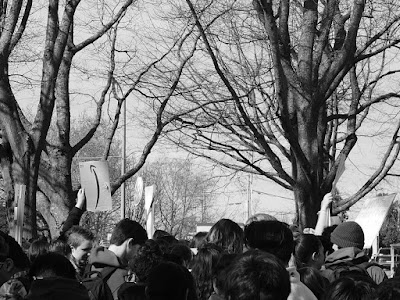 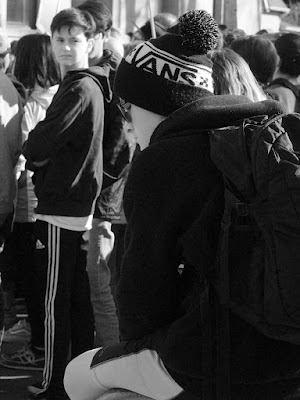 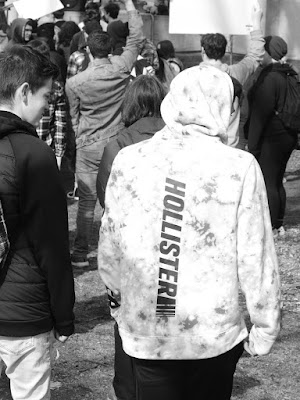 Our corporate masters are always present.

Like the NAACP, April and whats-his-name above are philosophically on the right side. They oppose climate change, they oppose oil pipelines and coal terminals and all that stuff. They will tend to favor incremental approaches, through careful legislation, which is functionally the same thing as not opposing anything at all. Assuming there is anyone left to write the history, they will find themselves on the wrong side of it.

Here is hoping that the enthusiastic young people can get off their phones, and stop buying Hollister-branded clothing for long enough to study up on how this shit actually works.

The creation of change is a fascinating chess game. The object of the game is to force the existing power structures into a position where they have only two choices: 1) to actually effect change, or 2) to publicly behave in ways that are manifestly, violently, blatantly, opposed to their own stated ideals.

Incremental approaches only allow the existing power structures to continue to behave badly, but in ways that are not obvious.

You have to, non-violently, force a crisis. Doing it violently isn't a very good idea, for reasons that are outside the scope of the current remarks.

It is a complex and intricate game, it requires enormous reserves of strategic intelligence, it requires great organization, discipline, and patience. And, not to put too fine of a point on it, probably some good people are gonna get killed. That's part of the crisis.

I don't want any of these decent, enthusiastic, hopeful, scared, kids to get killed or beaten up.

But if they do develop a strategy with some actual teeth, it's gonna happen. So, in a way, I guess I hope they do.

Which is sort of terrible. But then, this whole fucking thing is fairly terrible.

New comments are not allowed.