I was peripherally aware of the predecessor model, the Leica Q, but never paid it much mind. But now this thing comes out and I happened across some pictures, and holy cow. So here we go.

We can summarize this creeping horror in two pictures: 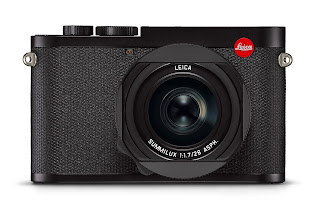 The front view recalls the classic Leica rangefinder. The top-deck steps down on the photographer's right to hold a couple of dials and stuff. The body is rounded at the ends, and covered with textured leather from the bottom plate to the top metal assembly thingy, whatever it's called. Ok, so this model is maybe the stubbiest, not to say stoutest, in a long line of gradually porkier Leicas. Maybe the front surface is featureless to the point of blandness. Maybe the lens looks absurdly out of proportion. I will stipulate all those things.

One can at least see the design notes being nodded at here, the maybe-respect for heritage. The retro notes, let us say, but updated to modern times, albeit by removing anything with a sniff of character, by botching the proportions, and replacing the traditional "natural" leather texture with something that looks like a chain link fence.

Let's flip this thing around. 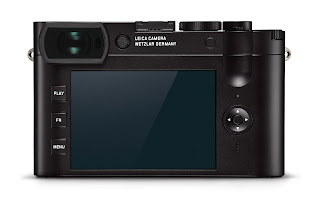 No, no. Flip the Leica around, not whatever the hell that object is. What? That IS the Leica? The same Leica? This is the back of that? What insanity is this?

I showed this picture to my wife and asked for her impression. She thought a bit and said "basic" and then laughed out lout when I told her it was a $5000 camera.

It looks like someone took the sketch of where the buttons were supposed to go and built it. It's as if their AutoCAD licenses expired, so they had to design it in Microsoft Word's drawing tool. This is ridiculous. The buttons look like they came off a $40 VCR from the last days of VHS tape.

This is the same kind of Bauhuh? anti-design we see from Phase One, but in this case it's being thrown in our faces by a company whose actual entire reason for existence is to design things that hearken back to an older time. They may design some electronics and lenses and stuff, but they certainly don't have to, anyone can do that. No. Leica's entire raison d'être is to be a design company that successfully translates design notes from previous iconic Leica cameras into new cameras.

And then they insult us with this monstrosity.

Don't even get me started on why the jammed a 28mm lens on the thing.
Posted by amolitor at 6:39 AM