Ran across this photo today. This are police officers lined up along 5th Ave for the funeral of a fellow officer, Wilbert Mora. Pretty sure the photographer is Mark Peterson (he posted it online, and didn't give an explicit attribution to anyone else, so I assume it's him:) 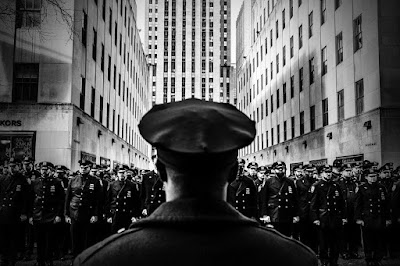 So what do we see?

An anonymous uniformed figure, foreground. Back turned to us. Shoulders square, one might suggest a vaguely military posture. Facing that figure, a loose formation of what are recognizably police officers. Perhaps because we see more of their bodies, they seem a hair less military. The mood is somber, the expressions are serious. Row upon row of uniformed men, rendered in stark black and white.

Behind them, a skyscraper vanishes off the top of the screen. To both sides, more cement buildings. Nothing is brutalist, but nothing seems aggressively art deco either. On the left, the word KORS over a shop window. On the right, more windows recede with writing above them.

There is a pretty heavy vignette, or at least the appearence of one. This focuses attention on the center, around the cap of the foreground officer (we assume it's a cop, the hat matches, etc), and lends, at least to my eye, a little flavor of "old black and while film" which is supported by the rest of the technical details of how the photo is handled (high contrast, very deep blacks, etc)

What we are in fact looking at is Rockefeller Plaza, we're looking across 5th Ave into the Plaza. The building in the background is Rockefeller Center. The KORS is of course MICHAEL KORS and we are looking at shops selling luxury brands, lining the Plaza. We are looking directly in to, if not the heart, at least one of the hearts of the American Capitalist Dream. The buildings are in fact considered to be Art Deco style. The photographer, ingeniously, eliminates any central features of the plaza by hiding them behind a big hat. There's probably a big dopey sculpture of some sort back there, which might rather ruin the mood.

Now, where have I seen row on row of uniformed figures juxtaposed with large Art Deco concrete structures. Hmm. Hmmm.

Oh! I know! A little film out of Germany made by Leni Riefenstahl! Triumph of the something.

At this point, though, the ranks/masses of identical dark figures arrayed in front of impossibly large, often art deco, concrete structures is a movie trope, and it never means that we're having a fucking birthday party.

So what do we make of these cops? Well. The mood is serious, the visuals are definitely Heroic Realism. We have a subtly lowered angle of view, we have massed power, we have the largeness of the anonymous cop foreground, we have the buildings vanishing off the top of the frame. It's all big, it's all power.

It's black and white, it's dark, it's high contrast.

You could certainly see this as a somber heroism, an ode to a fallen soldier. You'd have to be.. slightly tone deaf? Or kind of authoritarian? Maybe? I dunno, I feel like you'd have had to been rooting for the bad guys in an awful lot of movies, but maybe.

If you're me, of course, you go "holy shit, could you possibly make these guys look more like Nazis?"

Which opens up a meta-analysis, why the fuck would you go to such lengths to make cops look so bad? Or is the photographer? I don't even know!

I think this is a photo that could easily go in a bunch of directions. "Cops! Fuck Yeah!" or "ACAB and Nazis too!" or "Why you so harsh on our cops, dude?" or "how dare you make those Nazis look so heroic!" and maybe more.

This is a picture that I think could go any which way, and it pretty likely to give several different audiences exactly what they way. In a way there is a kind of mad genius to it, I guess.