Look at the pictures in the previous post before you read this one. This post is just about what went into the making of those pictures, so, if you don't care, you can skip this! Nice, huh?

As I mentioned, I was going up to Vancouver, and I decided to make a thing of it. Take some pictures, try to summarize My Vancouver in a little book-like object. So, on the bus ride up (2 hours, including a stop at the border), I made some notes. Here they are, together with a shopping list. 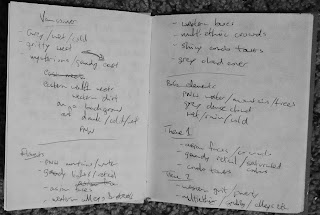 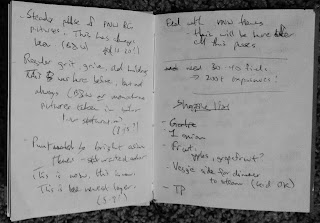 A bus ride can be a surprisingly good place to go over this stuff. You've got some time, some mental space to sit and think, stare out the window. You can write ideas down, take some time out to write a shipping list, go back to your ideas about pictures.

After mulling on it what I got was some layers.

Vancouver is, first and always, the land. The Pacific Northwest Rain Forest. I considered this to be the bones.

Built on that is a pretty straightforward North American City, basically a european/western construct. Architecture like so. Streets this wide, alleys that wide, and so on. This is the flesh.

The topmost layer is a sort of Asian thing, which is wildly amplified in my mind. Vancouver is radically multi-ethnic, and in the last couple of years has actually stopped feeling so relentlessly Asian, with an big influx of Eastern Europeans of various stripes. Public transit is now perhaps half asian, but completely multi ethnic.

Anyways. My Vancouver, as opposed to the real one, has a "top layer" of Asian, that's the most recent layer of what Vancouver is, that's the skin.

Three layers, all very different, and yet connected here in this place.

It is always fall in My Vancouver. I don't know why. I had a horrible 8th grade in boarding school there, and that was perhaps formative. School takes place in fall and winter more than summer, and so perhaps that's it.

Granville Street will always be the heart of Vancouver to me. In reality, it rises and falls, but in my mind it is always the center. I saw Star Wars there on its 2nd or 3rd theatrical run, 1978 or 1979, that horrible 8th grade year. Now you know how old I am. Leo's, by the way, still stands. All the nighttime cityscape stuff is on Granville or less than a block off it.

So my plan was to shoot these layers. The rain forest, the city, and the asian. I had limited space and even more limited battery power, so I deployed what Ming describes as Shot Discipline, and what you see is about a 1 in 6 "keeper" rate, which is crazy high for me. The Rain Forest is black and white, classic Ansel Adams, but I painted blur onto it. For dreamyness, or something. The City is b&w or heavily desaturated. The Asian pictures are punchy and bright, for that proper Shibuya feel, although they're all dressed for the pacific northwest.

Then there are the condo towers. Vancouver is a wild forest of glittering condo towers, mostly designed in an style intermediate between west and east. Vancouver's modern architecture looks exactly like what it is, suspended between Chicago and Singapore. I didn't really get the condo towers, but I tried. To be honest, I don't have any idea how to get at them without 100 pages of repetition, because that's what it feels like on the ground. Endless grinding glittering relentless repetition.

And there you have it. I include several frames of not-particularly-asian content shot in what I fancy is a vaguely Asian way, on purpose. These, conceptually, are supposed to help interconnect the layers of material. There are also a couple of graphical references between pictures which are trying to claw stuff together.

Did you catch the crepe shop? That's not a noodle shop. It's a crepe shop. It's the most quintessentially Vancouver photograph I can imagine.

Anyways. That's most of what I put in. Some of it was in hand when I started shooting. Some of it evolved its way in at one stage or another.

I hope you got something good out.